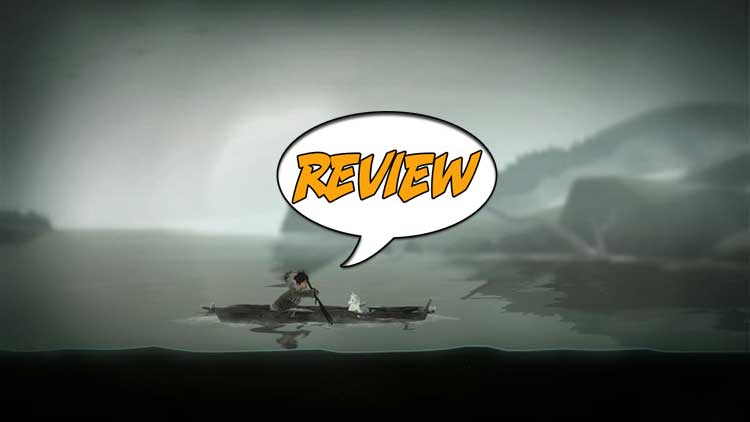 Spring is here, and as Nuna and Fox paddle up the river in their canoe to save a friend, a greater danger than the ice awaits in the first DLC of Never Alone.

Previously in Never Alone: When her village was overcome by an unusually strong blizzard, Nuna leaves to find the source and bring the world back into balance. Along the way, with her friend the arctic fox, she discovers the mysteries of the wonderful world around her, and also vanquishes the terrifying Manslayer who has devastated many villages. The blizzard is calmed, and all the world remains in balance. And at the end, Fox promises her that they’ll always be there for her to help her. A STORY OF TWO FRIENDS

Foxtales is the first expansion to the BAFTA award-winning indie game, Never Alone, which I reviewed last November when it came out. Continuing in the nature of the first game, the narrator starts to tell a new story, featuring the two characters from the previous game, Nuna and Fox.

This story was told by another respected member of the Iñupiaq people, Willie Panik Goodwin, Sr. Ishmael Angaluuk Hope, his grandson, is a writer and storyteller, and was very involved in the development and cultural insights of the original game as well.

This is a great way to keep true to the original idea of the game, and have plenty of content for future expansions. Robert Nasruk Cleveland, the author of the original story, Kunuuksaayuka, that the original game is based off of, is a literary giant in the Iñupiaq community. But as amazing as he was, he certainly didn’t have a monopoly on good stories. The decision to have the narrator tell another story that they heard is an excellent way to honor both the original game and the other stories being released in expansions.

It was also very clever to gently revise the story to have the two main characters be Nuna and Fox, as this plays to a very common theme in folk tales of having recurring characters. So not only are these stories united by the culture, but also by the player’s investment in the recurring two main characters. I’m also reminded by how common some names are in fairy tales (Hans in German, Ivan in Russian, etc), and this also evokes that. (Though Nuna and Fox are much more sensible than many of the Hanses or Ivans I’ve read about.)

The story itself is about how Nuna and Fox forget to respect a mouse, and in their attempt to save it after it falls in a river, find themselves at the lair of a giant mouse that the nearby village is terrified of. For good reason, too, because the giant mouse can eat Nuna in one bite. Both Nuna and Fox know that they need to do something about this giant mouse so the village can feel safe again.

I enjoyed the game greatly, because this is more of what I wanted: a beautiful story told with a lot of love. JOURNEY UP THE RIVER

There hasn’t been any change in the artwork or animation style that I’ve noticed, which is perfectly fine with me. It is gorgeous and makes great use of current graphics to accentuate the setting rather than toe the line of the uncanny valley. Nuna is adorable and obviously human, but also obviously a video game character.

There were a few times that I would be on the border of one area and another, and accidentally go too far in the canoe or swimming and the camera angle kept dramatically changing. But I think this is less a problem of the game and more an artifact of doing a puzzle platformer. It also wasn’t anything close to me losing enjoyment from the game.

One of the best parts was that, when I failed at tasks, I was really amused. Things like discovering that a spot is actually lethal and the AI swam right into it from the other side of the screen and I had no idea to keep them away (and without going into a ton of detail, this actually isn’t the AI’s fault). Or wondering what the helpful spirits are thinking about my repeated failures to throw a magic stone where it needs to go, so they need to keep supplying them until I succeed. But maybe that’s how my mind works. And being amused by failure and not frustrated by it is infinitely better.

The most important part about this game is that it’s fun. I’m sure there are going to be some people who don’t find this game very challenging, but as with the original game, I don’t think that’s the point. The point is the combination of all the aspects, the story, the sound effects, the animation, the puzzles, creates a wonderful experience that’s hard to duplicate. Playing Never Alone, both the original game and Fox Tales, reminds me of why I love video games so much.

It’s also good to remember that these stories tend to be shorter, and in the original game they actually added other elements from Iñupiaq folklore to help round out the game and make it longer. Here it feels like its the story without the extra padding, which works well for a DLC for an already short game. I hope they do this in the future with other stories. There’s an excellent opportunity to by sticking to the season’s theme: the original game takes place in winter, Fox Tales takes place in the spring, so there could easily be games for summer and fall.

I did encounter one glitch, and it was almost game-breaking before it resolved itself. I accidentally swam off the TV screen and wasn’t sure how to get back since usually the camera follows the character currently being controlled by the player. I didn’t have to “kill” myself to reset the screen, but I was close. But this didn’t ruin my enjoyment for the game at all. I was pleasantly surprised at the new mechanics used to solve the puzzles. There is only one point in the game that using a mechanic from the first game could have been helpful, but at the same time wasn’t absolutely needed. It made the new puzzles more of a challenge, to have to work with a new set of mechanics to solve them.

The game itself was fairly short, and it took me about two and a half hours to play it because there were a few parts that I really got stuck in. I’ve seen some people say they’ve completed it in an hour. But I really can’t complain for paying for an hour of a game that is so pretty and a wonderful story and additional cultural insights that help the player understand the culture this comes from. Because while Upper One Games was gracious enough to provide me with a review copy for the PS4, I’m going to be buying my own copies for the PC to help support this wonderful creative team.

BOTTOM LINE: MORE OF THE SAME, BUT THAT ISN’T A BAD THING