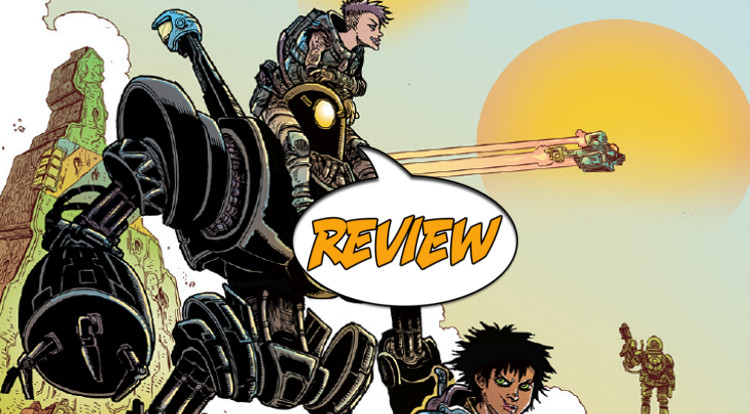 Cluster #1 introduces readers to Samara and Grace who live on the prison planet Midlothian … but the status quo changes fast. WELCOME TO A PRISON PLANET

Prison planet comics seems to be creeping back into vogue. Ed Brisson has a pretty cool book with Cluster #1. The issue starts on a very emotional beat with protagonist Samara Simmons waking up after being in a car crash. She is immediately arrested by a robotic security officer who seems more interested in removing her as a potential threat than helping the other woman who was burning in the wreckage.

Cluster #1 picks up with Samara waking up after a stint in cryo sleep. Rather than wait out a life sentence for her crime she has evidently elected to serve fifteen years as a soldier on the planet Midlothian. Human had colonized the planet and are at war with an alien race called Pagurani who later invaded and are systematically forcing the humans off their planets – prisoners provide defense. It’s a pretty interesting hook, all in all, and takes the prison planet archetype into some just as familiar, but compelling territory.

Samara is the grumpy loner-type who turns out to be a great leader under pressure. Brisson hasn’t pulled out a surprise with the protagonist of Cluster #1 although the mystery of who the woman is that died in the car crash and why Samara’s celebrity father has done nothing to amend the situation washes any predictability out the window.

The plucky, talkative sidekick of Cluster #1 is called Grace. In her Brisson has presented one of those characters who needs to wear their individuality on their sleeve. She’s young and naïve – only jailed for shoplifting – and in a crucial fight toward the end of the issue offers Samara a reason to be heroic and begin the hero’s journey of repairing her damaged past.

The best thing in Cluster #1 comes in the latter half of the issue when all the characters readers have met are forced into a squadron in order to take down a pack of attacking Pagurani. Things go wrong almost immediately in a scene that is very reminiscent of Edge of Tomorrow and leaves the convicts separated from their handler and their home – the only option they have is to fight their way back.

Brisson throws at a lot at readers of Cluster #1. All of it is rooted in old comic book action, but with enough dynamic twists and turns tossed in to not feel dated to a modern audience. The mystery of Samara’s victim is probably the most compelling thing in the series and that itself is definitely enough to keep me coming back for more on top of the fact that Grace is just a really fun character to read.

At a glance, Damian Couciero’s art seems heavily influenced by Tank Girl – perhaps because Cluster #1 is of a similar tone – but when you get past the box shapes and gigantic characters or constructs that populate Midlothian it actually quite beautiful.

Cluster #1 looks like a dangerous place to be the prison is oppressive, the constant character shifts between uniforms and nudity make the primarily female cast seem fragile until they get the chance to prove readers otherwise, the aliens are hulking and weird.

Everything Couciero puts on the pages of Cluster #1 feels like a threat to the Samara and Grace and, by association, to us. There are shades of a lot of great science fiction worlds in this issue all stacked together in the creation of a whole new world – especially if you are into desert planets.

Cluster #1 is a good first issue. It leaves a lot of narrative points open for development and has a couple interesting enough characters that the series seems worth sticking around for.