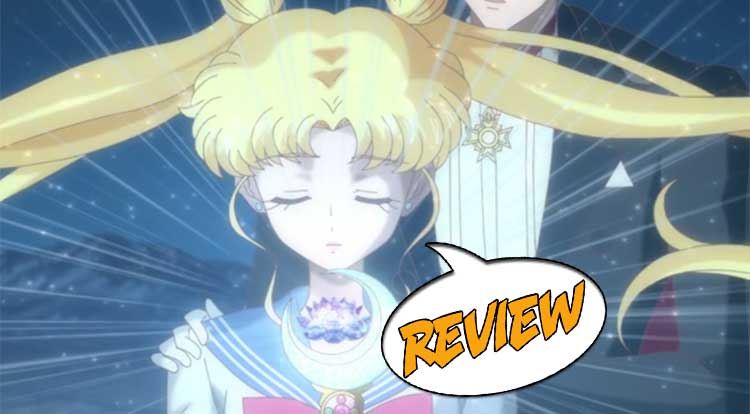 Sailor Moon has awakened the power of the Silver Crystal, and it is time to seal Queen Metalia for good in the first story arc finale.

END OF ARC ONE

Well, this isn’t a season finale, but in the original anime this is where it would have been. It is the end of the first story arc, and I am impressed at Sailor Moon Crystal’s ability to stay on target for matching episode to manga chapter. I wasn’t sure how this momentum would carry through the series, and while it does falter in places, it is largely successful.

I’ve mentioned before that the series has been great at ommitting things from the manga that won’t hurt the narrative. I think that the most important thing in any adaptation is retaining the spirit of the original story. By all means, try new things, and new things will be necessary by need of adapting to a different medium. The series also has great success here by finding aspects that would not have been able to be played up nearly as well in comic form, like when the Moon Kingdom is restored.

It also is excellent in streamlining aspects of canon that might not have been there earlier. For example, I think that Luna’s human form might have been a concept that Takeuchi had from the start, but revised it later to what Sailor Moon fans are aware of (and we see here for a moment in Crystal). In the original manga, the design at that point was unclear as to being potentially Luna. So it’s not so much retcon as a chance to revise.

But what I think was the best part of this episode was, and is worth the price of admission for me, is the reunion between Sailor Moon and the other Sailor Guardians. Having thought that the others were dead, it was a tearful reunion, and it is so touching to see the power of female friendship shown in every level. And most importantly, even when you’ve won the fight and everything’s going to be ok, it’s still ok to cry.

I will also say that I’ve never been fond of sticking Chibi-Usa’s introduction right at the end of the chapter like Takeuchi did, and as happens in this episode. I still wish that the girls had been given a little time to breathe, but I understand from a business standpoint why the move was done. (I wish it had been the start of a new chapter.) And, with as close as the series has been sticking, I wasn’t surprised at all that this is what they decided to do.

There were some technical issues with the Silver Crystal in terms of animation, which took me momentarily out of the story. It vanished between shots at one point, and looked way too small in one scene when it had been so large in the other. In a tense moment like a finale, it’s important not to let small mistakes like this lose the audience or any steam that has been gathering.

That said, the way they had the Silver Crystal floating within the Moon Stick’s crescent as opposed to the way of before of having it attached looked really cool. I don’t prefer one over the other and I like them both. I think it was a very smart design change.

Important to note how much less blood there is in the anime. It’s implied in the manga that as the senshi lie lifeless, they’re in a pool of blood.

As much as I have liked previous versions of Sailor Moon, it was great to see a faithful adaptation to the manga in full color and animated. Previous issues involving designs that might have been unclear in the black and white are resolved here, and potentially gave Takeuchi a chance to revise and streamline her narrative. These changes I think strengthen the story, and actually make rereading the manga now even more enjoyable.

While there are still too many still shots for my tastes, they don’t grate as much in this episode. Perhaps because the animation was a little bit better.

For this episode alone, it’s difficult to judge it alone since the full weight of the entire arc is behind it. If you’ve been watching the anime already then you definitely don’t want to miss this. The animation is one of the best episodes so far, and the story is on target.

I think that, if a series can make someone excited for its existence as well as reinvigorate excitement for the source work, it is doing the job intended. My original copies of the Sailor Moon manga were originally licensed by Mixx/Tokyopop, but as Crystal got announced I’ve started to get off my butt and buy the unflipped and more accurate translations by Kodancha that came out a few years ago. To be fair, I always intended on buying the new translation, but Crystal made me start picking it up now.

As the first arc as a whole, I’m overall disappointed at how the animation was uneven, but elated at what they did with the story. And while I do wish more had been done with the Four Kings, I’m elated to what they added.

I have seen screenshots that the animation is being cleaned up for the Blu Ray releases, so it might be worth holding off on watching for those picky about the animation. I myself will be waiting for a boxset, but that waiting won’t stop me from watching it as it comes out on Hulu.

The first story arc of Sailor Moon Crystal wraps up in a satisfying way that brings old elements and hints of new ones together.