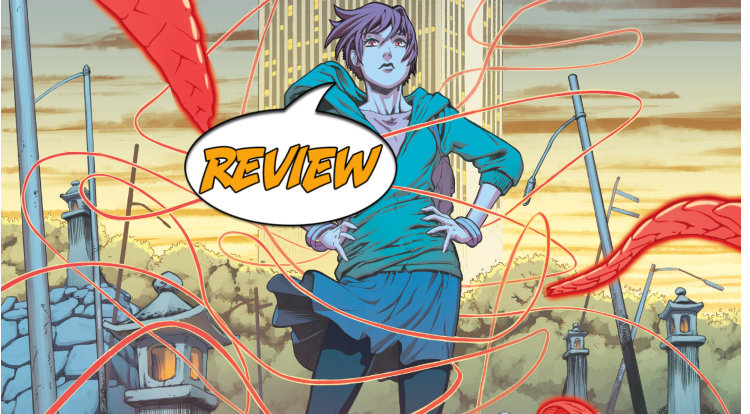 Wayward #4 has Rori fully stepping into her role as leader of Tokyo’s supernatural foursome and there are some interesting revelations about her mother. Previously in Wayward #3: More students with strange abilities, more creatures emerging from the shadows…Rori can see patterns pulling it all together, but can she discover the secret beneath before it’s too late?

In Wayward #4 writer Jim Zub really racquets up the adventure aspects of this storyline and compiles the various Japanese-inspired magical elements to create what is likely the best issue of Wayward to date. He also drops more hints about protagonist Rori’s mother than readers have had so far in a neat little twist that is certain to play out in coming issues.

In the previous issue Rori’s team of supernatural adolescents is rounded out by Nikaido – who has a sort of pheromone control over spirits and humans alike – and have cemented Zub’s cast of characters as the force for evil in the spirit underworld that is making itself ever more present in the series. Now, in Wayward #4 they assemble at Rori’s behest and they are soon hot on the tail of spiritual energy leading who knows where.

For the first half Wayward #4 is a mystery. Rori and her companions (which should be some fun phrasing for Doctor Who fans everywhere), trek through Tokyo until they are led underground to confront some kappas – that readers will remember as being taken down by Rori and Ayane in Wayward #1 – and a man who may or may not be a monk surrounded by a swirling ball of the same red spiritual energy that has been all over the issue thus far.

Zub does an excellent job throughout the battle sequence of giving each character a chance to shine. Their unique skills are highlighted individually whether it be brute strength, mood-altering abilities or an unspecified catlike power set – everybody is cool to watch and plays an integral part in distracting their attackers in order to facilitate Rori getting closer to the man in the cocoon of energy. Unfortunately, the great battle of Wayward #4 does not end in the clearest success for Rori.

It’s an interesting move on Zub’s behalf to have these characters team up and their first battle be a failure. Despite that, Wayward #4 is a highly compelling issue because readers get a chance to see these magical elements coalesce and become something solid and real that both we and Rori area beginning to understand.

Additionally, in Wayward #3 there was a big revelation about Rori’s mother and her connection to magic (as it is referred to in the series for lack of a better word). Rori, herself, makes the connection between her mother and the red magical strings that keep linking her to supernatural situations and Zub allows readers a glimpse into just how deep her mother’s connection to this world runs.

Wayward #4 is an exciting mystery in the same way the opening act of a great manga is. Jim Zub has penned his best issue of the series to date and I am certainly looking forward to more Rori and more magic.

Steve Cummings is the perfect artist for Wayward #4. He matches Jim Zub in the marriage of Western and Eastern expectations in this storytelling form. Rori falls into the beautiful fighting girl motif down to her uniquely coloured hair – though to their benefit there is a story reason for that.

Wayward #4’s secondary characters are just striking as the female protagonist. Ayane comes foremost to mind. Her powerset is implicitly tied to cats and Cummings draws everything about her to reflect that: Ayane has markedly pointed incisors, Ayane’s hair flips out like two cat ears, et cetera.

Cummings also pays as much attention to the supernatural elements in Wayward #4. The red winding magic that leads Rori to and fro is stunning and seems to glow where it is printed on the page. Colourist team Josh Perez and Tamra Bonvillain do nothing but enhance Cummings’ linework. Even the shifting colour of female characters’ hair is sweet without feeling out of place.

What more is there to say? Wayward #4 is a lovely, lovely book.

Wayward #4 is an awesome issue and the series is helmed by two creators who know exactly what they are doing and how they want events to play out. You’re doing yourself a disservice not picking it up.

Wayward #4 is the strongest issue to date. In it we see Rori and her team coming into their power sets and learning just how difficult it is to function as a unit.