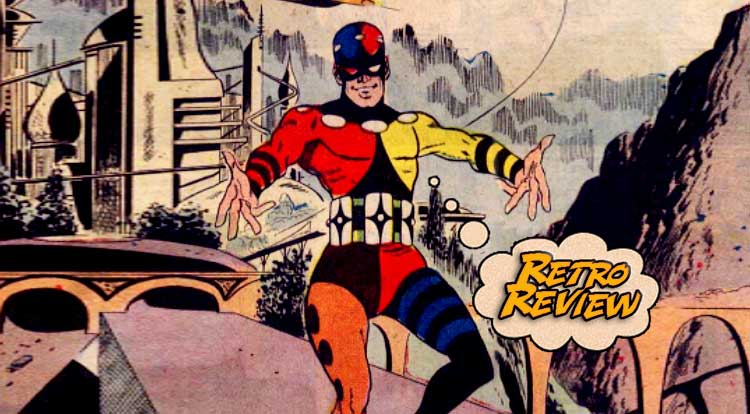 And now, it’s time for some SERIOUSLY obscure deep cuts from the recesses of the super-dupers.  When Charlton Comics went under, DC bought The Blue Beetle, Captain Atom, The Question and more, but…  Does anybody even remember The Prankster?  Your Major Spoilers (retro) review of Peter Cannon, Thunderbolt #60 awaits!

Previously in Peter Cannon, Thunderbolt: The Charlton Comics story is one of the more fascinating bits of comics ephemera, dating all the way back to the second World War.  Rather than working with external printing and distribution companies, as nearly all the other publishers did, Charlton handled the entire comic book creation process in-house at their Connecticut plant.  Indeed, an oft-repeated story was that Charlton made their real money in printing song magazines and such, only printing their comic book output to keep their ancient printing presses running.  (Whether this was because it was cheaper to do so or because the ancient printing assembly would have stopped working otherwise varies by who tells the story.)  Either way, Charlton’s four decades worth of comic book output is wildly inconsistent, featuring a vast array of utter drek.  Of course, there are noteworthy periods of their history as well, including their 60’s Charlton Action Heroes line.  Those characters, including Captain Atom, The Blue Beetle and The Question were sold to DC in the 80s, and Charlton Comics shut their doors in 1986, but among the Charlton characters never seen in the DCU are such luminaries as Gunmaster, Mr. Muscles and The Tyro Team.  But, the Charlton Action Hero with perhaps the most avant-garde potential was likewise never revived at DC.  We’ll get to him in a moment, but first off, our lead story joins Peter Cannon (aka Thunderbolt) on a commercial flight eastward… Pete Cannon, Thunderbolt is one of the most interesting stories of the Charlton lot, while simultaneously being kind of dull as a character.  Created by Peter Morisi, Thunderbolt’s black-and-red checkered costume was reminiscent of the Golden Age Daredevil, as Morisi had originally considered a revival of that character, but couldn’t secure the rights.  A non-powered human, Pete Cannon was trained in a hidden lamasery to master all the powers of mind and body, using his newfound strength and mental acuity to fight crime and corruption.  Thus, when the plane is hijacked by a mysterious warlord called The Dragon, Peter is ready to get involved… Thunderbolt frees the other hostages, and escapes The Dragon (also called The Dragon Master within the pages of the book, leading to some confusion for me), believing him to be a problem for the Chinese authorities, but when the warlord captures Peter Cannon’s majordomo, Tabu, Thunderbolt decides that the villain is, in fact, his problem after all.  They meet in battle on the roof of The Dragon’s headquarters, engaging in old-school pulp-style fisticuffs… Thought Peter Cannon was ready to abandon his Thunderbolt guise, The Dragon’s reference to an even greater foe convinced him to maintain his superheroic activities…  for another issue, at least.  Charlton Comics Action Hero line went under not long after, and the character went into comic limbo until the 1980s.  When the Charlton line was purchased by DC Comics, Peter Cannon made a return in the pages of Crisis On Infinite Earths, and it was he who originally took the role held by Ozymandias in Alan Moore’s treatment for ‘Watchmen.’  (You can actually see the parallels in Cannon and Adrian Veidt without too much effort.)  Though published by DC Comics, the rights to Thunderbolt were reacquired by his creator, Pete Morisi, some years ago, and the character most recently appeared at Dynamite Comics, who last week bought the publishing rights to your mom.

To be honest, this issue’s lead story doesn’t really stick with you.  It’s a relatively pleasant tale with a couple of plot-holes, featuring the art of Pat Boyette (who is quite underrated, if you ask me.)  The second story, on the other hand has a far more interesting pedigree.  In a future world that’s coming, in the dystopian multiplex known as Ultropolis, a totalitarian regime rules with the proverbial iron fist.  (Not THAT Iron Fist!)  The first page tells us that “love, laughter, music, art, every expression of human dignity can be a crime punishable by DEATH!”  And, thus we find such an execution already in progress… Ever since Superman put on a circus strongman’s costume back in the day, there have been a lot of garish uniforms to be had.  Some speak in hushed tones of Captain 3-D, others of the tasteless legend that is Captain Ultra, while I prefer the colorful raiment of The Sixth Doctor, but even those legendary costumes have little on The Pranksters garb.  Hell, it would be another decade before a suitable challenger arrived in the form of The Odd Man to even question Prankster’s status at the top of the heap.  Prankster is also an unusual case, as his main weapon against the dystopian jack-booted thugs of his city is that of whimsy, combined with a little bit of brilliance.  Arriving in a hot air balloon, of all things, The Prankster scoops up the would-be executionee, then turns on the jet engines (!!). When the Ultropolis police rush to capture our stylish vigilante, Prankster is ready with a theme-appropriate attack to immobilize them… I’ve always loved the art of Jim Aparo and his work on The Spectre stories in Adventure Comics a few years after this issue would make his career, but even in this more cartoony world, you can see the brilliance that Aparo could bring to a page.  Though the introduction to this issue promises that the hero is unlike anything ever seen before, careful readers of science-fiction may recognize some parallels to Harlan Ellison’s short story ‘Repent, Harlequin, Said The Tick-Tock Man’.  Thankfully, the leaders of THIS utopia are more cartoony and less dangerous than in Ellison’s, as the leader of the Secret Police, Sergeant Wratt, is an arrogant boob, while the city’s leader, Bane, makes the cartoon Cobra Commander look like Hannibal in comparison. Wratt is enraged, both at his generalissimo and at The Prankster, and orders a search of every outhouse, cat house, used car lot and Tommy Lee Jones reference to find the anarchist who would damage the productivity of their carefully constructed society.  What Wratt fails to realize is that The Prankster lives in a cave (like you do) along with his associate and genius weapons-creator, Dr. Grave… A lot of heavy literary references in this world, befitting the work of Denny O’Neil, who would become known for adding texture and a greater sense of culture and art to the stories of the Dark Knight just a few years hence.  His Charlton alias, Sergius O’Shaughnessy, still stands as one of the greatest noms de plume ever, as well.  Armed with the magic flute, The Prankster disguises himself as an elderly vagrant, and sets off for his next prank… Forty-seven years later, and the world still awaits the second chapter of The Prankster’s adventures.  Thunderbolt’s title (having picked up the numbering of the cancelled ‘Son Of Vulcan, meaning that his series goes #1, #51, and on through #60’) ends here, with the Action Heroes line following suit, leaving them with licensed comics until their demise in 1987.  Though much archived material has made its way forth in the years since, thanks to fans and pros who had worked there, but no sign of more Prankster has come, which is something of a shame.  Though its literary ancestry is worn on its sleeve, and Charlton’s production is…  less than stellar, this issue is memorable for all the right reasons.  Peter Cannon, Thunderbolt #60 is a weirdie, with some great art, at least one story with some bite, and you’ll have one hell of a time finding a really good quality copy, but it’s good enough for 3.5 out of 5 stars overall.  It’s time to petition DC to revive The Prankster as part of Multiversity, and give him the dark and terrible ‘Logan’s Run’ world he really deserves.  You tell me that Quitely and Morrison weren’t BORN to work on that book.

A bland lead feature, with a mind-scrambling second story that makes up for its shortcomings...