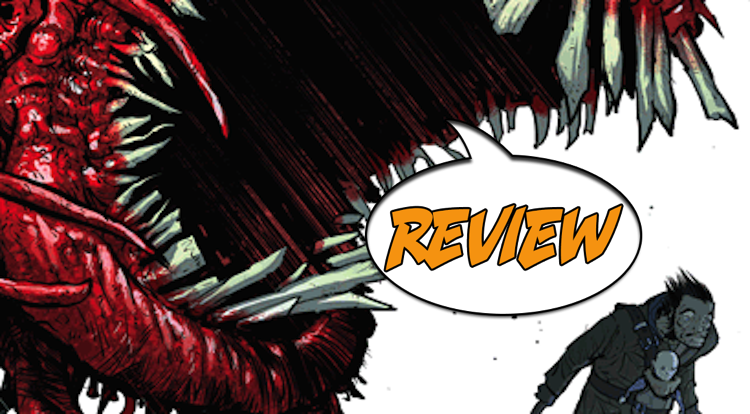 If you took Mad Max, mixed it with The Thing and sprinkled a little Lone Wolf and Cub on top, you may get something resembling Spread.  Issue one was a nightmare thrill ride, so I decided to sit down and read Spread #2.  Read on to find out just what you can expect from this creepy comic.

Previously in Spread: In a post-apocalyptic future, a monster known as the Spread has covered major portions of the land.  A man called No comes across a baby whose fluids are the only thing that can kill the Spread.  Now No must get the girl, Hope, to safety.

Justin Jordan has made no effort in hiding what has influenced him in creating Spread.  John Carpenter’s The Thing and Mad Max have been mentioned in the letters column and Spread certainly has elements of both.  What Jordan has done successfully is taken those influences and made them his own.  No is a samurai like character, a man of few words but able to handle himself, and two axes, well.  Because No is quiet, the book is narrated by Hope, the baby that No is carrying.  It’s extremely similar to Saga, and Jordan addresses it in the back of this issue.  While it isn’t ripping Saga off, it does read similar but I never found it problematic.  While the characters have been dealing with the Spread for years, readers are unfamiliar so it could be easy to get confused.  Instead, Jordan uses Hope’s narration, which is quite well written, to make it natural rather than exposition such as “This is [blank]which is a [blank].”  It’s something that is difficult and is a great example of showing rather than telling.  What the Spread is exactly sill isn’t explained.  While I don’t need an explanation for everything (and is only issue two), I hope Jordan will give us some insight in later issues.  The action and pace are as quick as issue one, as No rescues Molly, a crazy woman trapped by slavers.  There is some strange (and possibly disturbing to some readers) interactions between Molly and Hope, due to Hope needing to be fed.  Understandable in the story, but I still felt weird reading it.  The first issue had a strong horror vibe to it while this one is more action oriented.  I enjoyed it but the horrific parts were what really sold me on the title, so I’m hoping to see more grotesque things later on.  We know next to nothing about No, so relating to him is hard but I’m sure Jordan will flesh that out in future issues.  Overall, I’m quite impressed and this is a title I’m going to keep reading regularly.

WOULDN’T WANT TO TOUCH THAT

Kyle Strahm’s style is one that works for me most of the time but falters in places.  The drawings are perfect for the story and the majority of his lines are sharp, giving the book a dangerous sort of look.  It’s as if you wouldn’t want to get near or touch it, much like the Spread itself.  The monsters and horror elements are Strahm’s strong suits, with the giant Spreadworm being a standout.  The action flows smoothly and he does a great job of letting the page open up when needed.  Character’s faces look warped at points, resembling a mutant, which bothered me.  It’s more a symptom of his style than actual “mistakes” but was still bothersome.  Felipe Sobreiro’s coloring is terrific, mixing the white of the snow and the red of the Spread and creating a great contrast.  Grey tones are persistent throughout but nothing ever loses its pop or appears bland.  Unique art all the way through and fitting for the horror story being told.

BOTTOM LINE: LIKE POST-APOCALYPTIC MOVIES? THEN PICK THIS ONE UP

Spread #2 is a great book, especially for fans of horror and post-apocalyptic movies.  Justin Jordan takes elements from influences and creates something original.  The breakneck pace is just as strong as issue one and Jordan introduces the reader to the world superbly with Hope’s narration.  Kyle Strahm’s dangerous looking art has some quirks but fits wonderfully, supported by great coloring.  Some may take issue with the similarities between other stories but I found enough unique things to grab me and want to continue reading.

Justin Jordan takes elements from influences and creates something original. The breakneck pace is just as strong as issue one and Jordan introduces the reader to the world superbly with Hope’s narration.