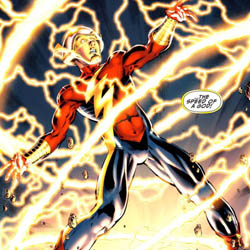 Or – “Jay Garrick Vs. The New York Subway System!”

Why is The Flash fighting a wave of chihuahuas?  What’s the deal with Earth-2?  Has anybody heard something about Green Lantern?  All these questions and more are addressed in our Major Spoilers review of  Earth-2 numero dos!

Previously, in Earth-2:  Superman, Batman and Wonder Woman have fallen in battle.  The Huntress (also known as Robin) and Power Girl (also known as Supergirl) have been shuttled into an alternate universe.  Where are the heroes who can save Earth-2?

THE MAN WHO FELL TO EARTH (TIMES TWO).

A month or two ago, in the final issue of Mr. Terrific, Michael “Mr. Terrific” Holt found a portal that threw him through time and space.  This issue opens with Mr. Terrific crashing to earth like David Bowie in the middle of Earth-2’s Times Square on the fifth anniversary of the “V.A. Day” (which sounds very ominous.)  What’s even more amazing is that his arrival has been expected, as he is greeted by a handsome young man with a dueling scar, who introduces himself as Terry Sloane.  That revelation had me picking my jaw up off the ground, followed quickly by a curb-stomp battle that pretty much ends before it begins, and I’ll tell you this much:  The winner is called Mr. Terrific.  We cut to the meteor crater in Michigan (seen at the end of last issue) as young Jay Garrick realizes that there’s a man in the bottom of the impact zone.  “I am a dying god,” the strange glowing man intones, “and the task ahead needs living heroes.”  As Mercury’s energies fade, he imparts his powers to Jay, transforming him into blah blah blah we read the cover already, get on with it, Matthew!  I admit, I had my issues with the solicited version of this issue’s cover image and it’s depiction of Jay’s new Flash duds, but seeing Nicola Scott’s version of them in action, all my complaints are washed away.  The new/old/original Flash looks ridiculously awesome, and there’s enough of the old design in play to satisfy my inner continuity geek.

THE PART THAT WE’VE BEEN TEASED ABOUT OVER AND OVER…

This book is a rarity for this era of comics story-telling: a team book that manages to be about a TEAM, or at least multiple characters, as Jay’s story segues seamlessly into that of Alan Scott, a young executive arriving in Hong Kong.  For all the hubbub and hype, the creators seamlessly work in what we need to know about Alan:  communications tycoon, just off a big deal, and extremely relieved to see his boyfriend after a long trip.  For all the showboating about it, the actual reveal works organically (and adorably) within the context of the story, and Alan & Sam set off on a  romantic country getaway… by train (cue ominous musics!)  The art in the entire issue is fantastic, and I really appreciate the facial expressions (Alan’s joy at seeing Sam again, Jay Garrick’s obvious love of his new super-speed abilities) and the depth of character that Nicola Scott provides.  I know that the Big Three gave their lives last issue to help repel an attack from Apokalips, but the references in this issue make me wonder if that’s ALL that happened, especially the response that Jay gets when he starts rushing around in his helmet, which, to be honest has seldom looked better.  There are surprises for both Jay (in the form of another familiar face from the old Justice Society of America) and for Alan, but there’s even a surprise for me, as Alan Scott takes his moment during the train ride to propose to Sam.  In a way, I’m a bit pleased that DC didn’t throw that little tidbit into the media coverage over the last few weeks, as it might seem like they were trying to match Marvel’s recent announcements wedding for wedding…

Sadly, part of Stephen’s recent predictions about Alan’s origin prove true, which leaves us with three separate (and effective) cliffhangers within the same book.  The world of Earth-2 is shown in this issue to be different from Main-DCU-Earth in ways both subtle and not-so-much, but there is a clear attempt by the creators to differentiate this from the regular world, efforts which I appreciate.  For all the talk about Green Lantern’s reveal, this issue is really Flash’s, as we get his origin, his first heroic acts and the ritual of naming (handled quite well, I might add) while Alan is watching the countryside from his bullet-0rain.  Next issue, though, promises to be the official first appearance of G.L., and I have to say that I hope he keeps his big red shirt and purple cape ensemble intact.  (I don’t expect it, but I hope for it.)  All in all, Earth-2 #2 is a good book, one which builds on the first issue’s bombast with character work and brilliant art, earning 4.5 out of 5 stars overall.  The biggest complaint that I find about this one is that there just wasn’t enough of it to make me happy, as I found myself wanting more than the 20 pages herein contained.