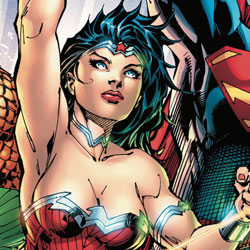 DC Comics has announced that the New 52 paid off big time for the company, selling more than 5 million comic books in a six week time period.  That’s a lot of books, and following the release of the Top 300 Comics for September 2011 chart, it makes us wonder how many books were actually sold…

DC did share some numbers, but keep in mind these are not exact numbers

“We are thrilled by the overwhelmingly positive response from retailers, fans and the creative community to DC Comics — The New 52,” said DC Entertainment President Diane Nelson in a statement. “This was a bold publishing initiative that is reinvigorating and growing the industry and medium we love.”

So this means Justice League #1 sold more than 250,000 copies, but not more than 255,000, right? Or does it mean the title sold 299,999 copies? While this is really great news for the company, and does raise the bar for October, it would have been nice to see exact numbers instead of generalities. This may be because those in the know don’t know all the numbers as titles are still returnable from the comic book shop. Plus, this number doesn’t take into account the number of digital copies sold.

“Our digital sales have been better than we could have imagined and we are pleased that these sales are additive to traditional publishing sales in the comic book stores,” said John Rood, Executive Vice President of Sales, Marketing and Business Development. “We’re not migrating readers from print to digital. We’re adding more new readers into the mix.”

While it’s more important to read between the lines on information sent via a press release, the bottom line is this – more comics being sold means more people are reading, and more people reading is a good thing for the industry overall.