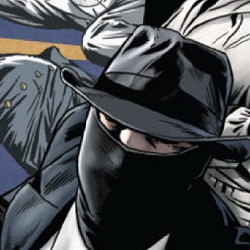 The world of the Mystery Men grows more dangerous, as The Operative picks up allies in order to battle the insidious “General”. Does this tale with Pulp sensibilities dole out a bountiful amount of entertainment? Or is just a piece of over priced Ten Cent trash? Take the jump to find out, Faithful Spoilerites! Previously, in Mystery Men: Framed for a crime he didn’t commit, Dennis Piper aka The Operative moves through the corrupt underbelly of New York City circa 1932. Saved from a hail of crooked cop gunfire by the mysterious “Revenant”, The Operative has to untangle this web of corruption that is trying to ensnare him, before it’s too late.

TO FIGHT INJUSTICES WITH TWO-FISTED JUSTICE

As the Operative, and the Revenant team-up, Sarah Starr wanna-be Ace of the Sky tries to tag along, as the Operative’s mild racism, and sexism get in the way. As the ominous conclave known as “The Board” plots War in Europe, their chairman, the disfigured “General” takes questions from Ayn Rand, and awaits the arrival of a mysterious amulet.

The story that started in issue one, just continues to grow in intensity, and richness. The characters are more fleshed out, the relationships between them are revealed. One such reveal was done very nonchalantly, and it took me aback for a second, but after it was dropped I could see how it made things make a bit more sense. The Operative is still our main protagonist even though he is a slight racist towards The Revenant, and a passive sexist towards Sarah Starr, the twin sister of the woman he loved, who was killed in the first issue. To me it felt somewhat organic, and probably could have been handled with a much more subtle hand.

The way David Liss is so far able in each issue integrate new characters, and not have it feel forced, is something that I respect. Not a single one of these characters come off as if they were hoisted upon the reader, and expected to just accept it. Liss was able to introduce both The Operative, and The Revenant in the first issue, and allow them to have their motivations, and personalities exposed, like layers of a peeled onion. The artwork provided again by Patrick Zircher looks gorgeous, and improves upon the artwork that I saw in the first issue. Here in the second issue, it has more life, the characters have a lot more to visual range, and don’t seem to be hidden. The use of shadows seems to have been curbed slightly, but what is now in their place is stunning character work, and well choreographed action.

The panel layouts felt very genuine, and didn’t stutter, or falter in any shape or form. Whether it was a brazen Operative bashing a wooden bar stool over a cops skull, or him kicking someone’s teeth in, it had a flow that was easy to embrace. The cover this time around is much better. Here you can clearly see our protagonists, The Operative, and The Revenant. The cover still has mystery to it, and is appealing to the eye, even if the color pallet is a little dull.

THE VERDICT: WITH IT UNTIL THE END

The first issue was a solid comic book, well paced, well illustrated, and kind of fresh, but not some mind blowing original. I have come to realize is that this will never be a revolutionary take on the comic book medium. What David Liss, and Patrick Zircher’s Mystery Men represent is a throw back tale to the Pulp heroes that hounded the ten cent digests, and fought from the proverbial shadows on your great grandfather’s radio dramas.

I still feel that this comic doesn’t come off as a in-continuity Marvel Universe story. To my knowledge the only noticeable characters that would be running New York at this time were Phineas Horton, creator of the first Human Torch, a young, frail Steve Rogers, and that’s about it. When I see the “Daily Bugle” sign in the background, I feel that it could be just about anything else, and it still would work. This book stands on it’s own merits. It doesn’t need a boost from Spider-Man, Wolverine, or Captain America.

Mystery Men is a tale that doesn’t rely on established characters such as Doc Savage, The Sprit, or Batman. But rather new, and much more understandable heroes that have their own human flaws, and really do belong to the Marvel dynamic. Though these characters aren’t so entrenched in the Marvel Universe as we know it, they are fully entrenched in it thematically. If you are a fan of Doc Savage, The Shadow, The Rocketeer, The Green Hornet, old time radio dramas, then by all means journey to your local comic book store, and pick this comic up. From a time long past when ladies were dames, and the choice of gun wasn’t Glock, but Thompson. In closing, Mystery Men #2 receives 4 out of 5 stars.