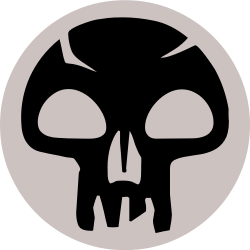 I first started playing Magic: The Gathering out of necessity. After moving from Ohio to Kansas I found a faculty-sanctioned gaming group at a nearby university. Everyone was pretty friendly and I volunteered to take a turn GMing the D&D game they were starting. There was only one problem…

The group basically got together to play Magic, and they wanted to play for a couple of hours before starting D&D. This meant that, aside from the fact that we always got started waaaaay too late at night, I had to sit there for two hours until everyone was done playing with their stupid cards. So I started playing Magic too, because I was tired of being bored.

Of course, now I love Magic: the Gathering. As you may or may not know, I spend a lot of time making decks and playing with other nerds. The past couple of years have been fun, as I’ve come to use  casual deck-building as a form of self-expression. Currently I probably have over a dozen decks, each one operating at various states of efficiency, but each one based on a theme or off-beat combo. Of course, now I don’t get to play them as often. Why? One word.

Don’t get me wrong, I don’t have anything against the commander format on a fundamental level, but there are some things about it I just don’t like. So you can imagine my vexation the first time I went to my gaming group and everyone refused to play a 60-card game with me because everyone was trying out their new commander decks. Hell, some people in our group have gutted their old decks and now pilot commander decks exclusively. So even if they wanted to play against my 60-card deck (and to be fair, they often do), I’m faced with an opponent with an extremely clunky , unreliable deck. And what’s the point of playing against that? I think that’s why the format sticks in my craw like it does. Because some people are so excited about it that they have decided it’s the only kind of Magic that they want to play from here on out. If not for this weird exclusivity I wouldn’t give it a second thought, like Pauper or, you know, Standard.

So of course, I had to once again set out to assimilate or die of boredom, and I really don’t like it. In fact since I’m forced to play it, the problems I have with the format really float to the surface.

Commander’s Rules Encourage a Particular Type of Deck, and perhaps more importantly discourage certain types of decks. Since commander decks are 100 card singleton decks (meaning you can only have one of each card instead of the usual four-of) it is nearly impossible to build a combo deck. Unless your deck has a ton of tutoring effects as well as some recursion, you are likely to play dozens of games before you ever see your combo pieces. No, commander encourages big, splashy critters and artifacts and crazy over-the-top plays. Is that a bad thing? Only if that’s not the kind of Magic you like to play, or in my case if that’s not the kind of Magic you want to play every time.

Commander Games Take Too Long. largely due to the 100-card singleton restriction (and to a lesser degree, the color restriction) decks tend to be fairly clunky. A player will cast their commander only to have it killed, but the Doomblading player will have nothing to follow it. So the game ticks on until something else big comes along. “Fine,” You say, “What if there’s no answer to THAT big thing” Well, now your critter gets to spend the next 8 turns whittling your opponent’s 40 points of life away. If you add the fact that Commander is being marketed as a multiplayer format, the games can take hours and hours. I know there have been times when four person games in our local group have taken more than three hours. That, to me, seems ridiculous.

I Need Multiple Commander Decks. This is a personal Problem, I guess. Since we play commander so often in our group I eventually got bored with my first commander deck, so I’ve had to make more. This process is somewhat grueling for me since I’m making a deck (something I love to do) for a format I don’t want to play.

It’s The Wrong Kind of Restrictive. Commander is a restrictive format, which you might think would be a plus for me because I like restriction. I put entirely arbitrary deck-building restrictions on myself all the time, that’s part of the fun for me. As a 100 card singleton deck with tight card inclusion guidelines, Commander can really challenge a deck builder. But I don’t need that challenge, because it’s a challenge someone else came up with. I guess that, for players who always play the best decks on the internet and are used to hyper-optimal decks a commander deck can be a real awakening, but for someone like me it’s like someone took out the A and X buttons from my controller to make Street Fighter II “more fun” (In this analogy Commander is having no buttons and my natural necessity for restrictions is, I don’t know, winning with Blanka, all analogies fall apart eventually, leave me alone).

I don’t want you, dear reader, to think that I hate the Commander format. I don’t. I certainly don’t mind if other people play it, and I myself don’t mind playing it as the novelty that it is. You might say that I like the commander format as much as I like “Taking Care of Business” By Bachman-Turner Overdrive. It’s a fine song, one I might enjoy if I heard it every once in a while. But you know that song never goes away, it’s always in some commercial or sitcom montage not to mention heavy rotation at the “classic rock station”. And that in the end is what commander is like for me, fine if I haven’t dealt with it in a while, but awful when I keep being forced to deal with it.