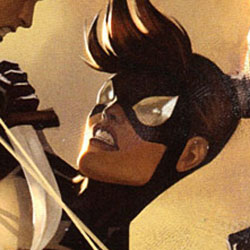 When Spider-Girl sets a trap for Ana Kravinoff things start out well enough, but what happens when Kravinoff reverses the trap? Find more after the jump. Previously in Spider-Girl: Anya has recently moved in with a new roommate in the apartment she and her dad shared. Meanwhile, as Spider-Girl she figured out Ana Kravinoff (yeah I’m getting confused with Anya and Ana as well) was following her and set up a trap to confront the daughter of Kraven.

WHO SET THE BETTER TRAP?

We open right where the last issue left off, Spider-Girl revealing the trap she had set. Go through some fighty-fighty with Anya keeping the upper hand and suddenly Ana turns the tides, talking about how she was just gauging Spider-Girl’s strengths and weaknesses, which makes sense, she is supposed to be a highly trained hunter and she points out some pretty bad flaws of Spider-Girl so it works.
Spider-Girl, realizing Kravinoff is correct, decides to change tactics and take the show on the road and avoids the buildings as she would be better in the air. So, at least some of her training is showing through, of course it doesn’t help when Kravinoff uses the classic super-hero bait, a hapless victim thrown from a balcony. Anya shows off more hero-training with an explanation, albeit a bad one, of how to perform a mid-air rescue.

Well, the office setting, and the computer Spider-Girl throws at her, cause a bit of a problem for Ana. And now I become reminded as to why I liked the character when she was first introduced, Anya Corazon isn’t just a fighter; she’s also quite clever. Tobin did a very good job setting this up in the earlier parts of the series as Anya leads Ana six blocks to the Baxter Building, a place with high-security that already has her as being friendly.
The fight is all but one and we get some decent scenes of the supporting cast, one revealing a bit more (though not anything real) about the Raven Society and the other following her friend and roommate as the two discuss how to make a place really theirs. Both snippets have “streaming video” from the Daily Bugle’s website by one Phil Urich and the latter even questions how he’s able to get such good angles. I found these bits rather cool as I’m a bit of continuity fan-boy and as those that follow Spidey know, Phil Urich is the new Hobgoblin and has been using floating cameras to catch all sorts of interesting footage.

Unfortunately, while the writing has vastly improved, the art has only minor improvements. While there was nothing that actually pulled me out of the book this time, I still just don’t like the artwork. Southworth’s style is too dark and grainy for me. I prefer more distinction and line work, not the overly shady that we get here. The style is smooth, but just not to my liking.

While I’m still not happy with the direction her life has taken, I’m still happy to follow Anya down that path. Tobin has earned at least another purchase from me. Writing wise, I’d say my only real complaint within the issue is Anya calling Ana “Thundercat” as I don’t feel she would be someone to even recognize the series, let alone use it. Either way, the book does earn a good 3 out of 5 stars.