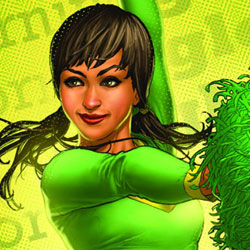 In which some strange stuff goes done, and we learn a little more about the group’s resident curmudgeon. Previously in Morning Glories: That’s kind of hard to say, really. At one point everything looked like it was moving along at a quick, yet creepy, pace, when all of a sudden we were either jumped forward or backward in time- heck Nick Spencer may have even pulled a slideways jump, but in any case, crazy things happened.

Since her first appearance, Zoe has been the bitch of the group, constantly complaining, constantly bemoaning her place with the new kids, constantly looking for a way to step up to a better social status. This issue gives readers a look at what lies beneath, and if you think she was not very interesting before, you’ll change your mind after you learn about how she was found as a young girl in India with special talents, grew up in America, was a JV cheerleader at her school, and how she accidentally murdered one of her teachers and disposed of the body. If that doesn’t pique your interest, then wait around and watch her murder one of her fellow students in cold blood, and then walk back to her dorm like nothing happened.

But there is some question as to whether or not the Zoe we saw kill, is actually the Zoe that appeared a few pages before in the issue. Yes, more supernatural mumbo-jumbo rises to the surface, as Zoe may have been possessed by the spirit living in the school’s basement.

What I love and hate about this series is that Nick Spencer gives us just enough information to help flesh out the characters, and make us more interested in their well being, while at the same time tossing clues and surprises our way that make us want to continue to read if we hope to someday figure out the answers. It’s all very Lost, and that, in my book, isn’t necessarily a good thing.

Once again, Joe Eisma serves up art that is both beautiful and disturbing. His character work is good, reminding me of some of J. Scott Campbell’s line work, and his backgrounds have the texture needed to add depth to the image. Part of that background depth is more than likely due to the color work, as there is a lot of texture in those panels full of color.

To go along with the good, there are also some areas that need tweaking. Even though Zoe is in the spotlight this issue, there are times when her facial features are off slightly when we jump back in time to see her just a few years before at her other school.

Even with the huge issue swerve last time out, I’m still sold on Morning Glories as one of the better ongoings out there today. A story that hasn’t stalled, good art, and character development, and above all, a great mystery are what keep readers interested, and Morning Glories has it. I would like a few more answers soon, but that is out of my hands. Overall, Morning Glories #7 is worth 4 out of 5 Stars and is worth picking up.