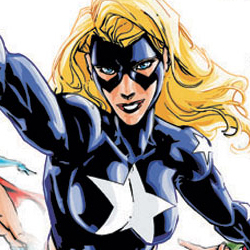 I’ve really been enjoying JSA All-Stars for a while now: it may not be about to revolutionise the comic book medium, but it’s been a source of fun and exciting super hero action, and is a good read for it. I decided, thus, to take a look at the latest issue of the series, and see how it stands up under the reviewer’s microscope. Previously, in JSA All-Stars: the All-Stars split off from the main Justice Society, and thereafter travelled to alternate dimensions, stopped Mayan gods from taking over the Earth, and team member Cyclone found herself face-to-face with some literal cy-clones. Now, we begin a new arc…

A Story, and Some Other Occurrences

Our issue opens in Greenland, where an ancient artefact is being loaded onto a plane in order to be taken back to the United States. The plane gets shot down, however, by a group of men lead by villain Arthur Pemberton (last seen taking a beating about ten issues ago), and they recover the artefact. Meanwhile, back at All-Stars headquarters, Anroid Hourman shows up to have a talk with Roxy, the All-Stars’ AI, about the virtues of being human, and then promptly leaves. We see, then, that Pemberton is working with some otherworldly sorcerers in order to help heal his daughter – who is in a vegetative state. The All-Stars work out that a lot of artefacts like the one in Greenland have been stolen, and stolen by Pemberton; they work out where the next theft will be, and go to Vienna to stop it. They beat a band of sorcerers and acquire the artefact but, on taking it to a researcher in Tunisia to be looked at, Pemberton strikes, wielding a magic staff that appears to make the heroes vanish. We end with the All-Stars apparently defeated.

This book presents to us a fairly simple story: Pemberton is stealing things (although the All-Stars do not know to what end), the All-Stars find out and then try to stop him. A problem I have with this issue is that, whilst the story is not badly told, it seems to me that it is difficult to tell such a simple story in a way that can still excite us; villain does something, heroes react, and then comes a fight – there’s not much depth there, and this issue could have really done with one or two elements to shake up the plot and engage me a bit more.

Instead of that, we have a few scenes in this issue that are as-of-yet unrelated to the main story. First of all, the Android Hourman bit comes out of nowhere, and ends just as abruptly. I can’t even imagine what role this will play in the larger story, if any, and the whole scene, at this point, only serves the purpose of interrupting the plot. The other distraction in this issue is that Citizen Steel is sad for some reason. That’s all we get, but one can only hope that this will somehow have a purpose by the end of the arc.

I did like, however, how Pemberton’s motivation was handled: working with monstrous sorcerers in order to heal his daughter, rather than just straight-up villainy, adds some depth to his character. It’s a cheap and easy trick, but it works well all the same. It’s worth restating, also, that for all my griping, this is not a badly-written book. Indeed, it is quite readable and entertaining, but I cannot help but feel that it could have been more so.

I See Skies of Green

Williams does a very good job drawing this book – everything is clear, and the actions scenes work very well, they’re always flowing and have a very nice feel to them. The only aspect of Williams’ art that feels a bit off is the facial expressions: they’re mostly fine but occasionally a character’s face looks a little out-of-touch with their dialogue and disposition in that panel.

The art does encounter some problems with the colouring, however. For one, why is the sky in Greenland green? Not just a hint of green either, I mean bright green. Indeed, backgrounds is really the area where this issue runs into trouble, with numerous panels just having all-colour backgrounds, rather than actual drawings of the room or location they’re in, which doesn’t sit well with me. Another problem, which is not necessarily the colourists’ fault, is that the sorcerers attack with some sort of fire, and it tends to light up the panel, as well it should. The problem comes when most of a panel contains oranges and reds – it looks garish, and that does not make for pleasant reading. Apart from those few issues, though, the colouring is fine.

The cover features the female members of the All-Stars: Power Girl, Stargirl, Cyclone, Judomaste and Anna Fortune, all coming at the reader with an all-white background. There is nothing wrong with the art, also by Williams, in fact it is very well-drawn, although I do have to question why Judomaster is doing a flying kick whilst all the other ladies appear to be flying. I don’t know, maybe she is flying due to the aid of another hero, and she just likes to strike that pose. It is not a particularly imaginative cover however, but it does manage to do a good job of catching the readers’ eye, I think, as the white background and its contrast with the colourful heroes is sure to make it stand out on the rack. Overall, then, it’s a pretty good cover – I certainly find it very pleasant to look at.

Overall, this book has its share of problems, but I ultimately found it an entertaining read. It doesn’t quite live up to the quality of the previous five-or-so issues that I have been really enjoying, but if you go in expecting nothing more than a bit of light entertainment then I can imagine that you’ll get just that out of this book, and it gets two and a half stars out of five from me.