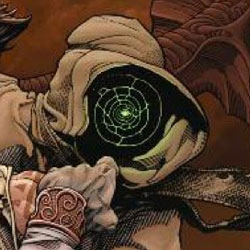 Dungeons and Dragons seems to be more popular than ever. Of course that may just be my perspective after having been immersed in the game realm for the last year and a half… IDW Publishing and Hasbro teamed up to bring not just one Dungeons and Dragons comic to reader, but another set in the Dark Sun universe. Previously in Dark Sun: After spending the night in the bed of a noble, gladiator Grudvik was arrested and sent to market to be sold as a slave. He broke out, fighting his way to freedom – if you consider wandering in the harsh desert of Athas freedom…

SOMETHING TO BE SAID ABOUT PICKING UP A ZERO ISSUE

As far as #0 issues go, it was certainly one readers would benefit from reading before diving into this first issue. It’s been a while since the prologue introduced me to the character of Grudvik and his plight in the strange land of Athas, and it took a moment for everything to come flooding back from my memory. This issue kicks off with Grudvik taking down a bounty hunter, with the intent on killing the other if the two weren’t suddenly caught up in an adventure across the desert skies on the back of a Cloud Ray Elder.

When the two finally reach ground, they’re bound by the rules of the desert to not kill each other, and when Grudvik learns the charm he received from his one night stand is the key to a hidden treasure, the two set off to become rich. Of course they first need to reach the city of Tyr, and fight off a Silt Horror, but that is nothing when women and money are the goal.

As light as the issue is in dialogue, it is rich in humorous moments, as Aki – who turns out to be more of a bard than a bounty hunter, attempts to ask questions or make comments, and he is immediately shut down with a quick “Shut up.” It’s a gag that plays out across several pages, and in addition to bringing a smile to the face, it also tells the reader much about the disposition of our heroes. This issue isn’t as heavy on the action as the other D&D book currently out, but the action that does occur is handled well, and gives everyone something to do, while making their way back to Tyr.

The paper this issue is printed on is quite different than the stock I’m used to reading in comics these days. It isn’t glossy, so the colors have a dullness to them that works in a world where everything seems bleached by the hot sun. The cover is the same stock as the interior, and without the glossy glare attracting the attention of readers at the comic shop, there might be more than a few that pass this by. It certainly feels less expensive than other books, and the fact that it still has a $3.99 cover price might make people hesitate.

The art itself is very well done, and it reminds me of some of the Abe Sapien stories we’ve seen from Dark Horse. It’s a style that fits well with the story, and that’s a good thing for this issue. There are a few times when the panel composition seems off, with a lot more empty space than what one would normally expect. It’s almost as if the artist expected the word balloons too be bigger, and then dialogue was changed causing the oddity composition. That being said, there are many panels that evoke the feeling of The Searchers and other John Ford westerns that make use of widescreen vistas to show how isolated the characters are in the world.

Dark Sun is quite different from the Dungeons and Dragons title. While it does have a fantasy feeling, it doesn’t feel like high fantasy. Instead the story and world play out more like a Robert E. Howard tale than anything else. For those who like barbarian tales, Dark Sun #1 is a book for you. A fun adventure, simple plot and good art work together to earn Dark Sun #1 4 out of 5 Stars.