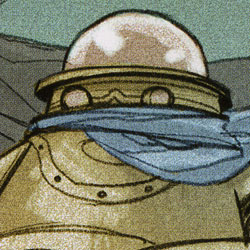 If you ever wondered the real story behind a group’s formation, then Mystery Society has you covered. While Nick Mystery recounts the origin story before going into the slammer, the Mystery Society roster grows. Previously in Mystery Society: Nick and Anistasia thought the best ay they could spend their vast wealth was to create an organization that would debunk or prove all the myths and mysteries we’ve been exposed to all our lives. While investigating Area 51, Nick rescues twins with special powers, and ended up getting the military seriously upset over his actions.

THE TEAM GROWS BY FOUR

In order to make it out of Area 51 alive, Nick asks the kinetic twins, Sally and Nina, to use their powers to destroy a armed robot of terror, but spare the life of General Powell. Of course anytime one embarrasses the government there is going to be some type of retaliation, and the government spins a tale that makes Nick to look like a terrorist of the worst kind. Hot on his tail is the General’s son, who reminds me a lot of Nathan from South Park, who is prepared to take down the Mystery Society guns a blazing.

Meanwhile, the Society grows by four; twins Sally and Nina, the Secret Skull, who we met last issue, and a steam punk robot that contains the brain of Jules Verne. It’s quite the group, and one that I find incredibly fun to read. While it’s not completely like League of Extraordinary Gentlemen, the diverse nature of the group and story makes this series feel very familiar.

By the end of the issue, Steve Niles has whipped up a magnificent escape featuring a UFO, a quest to find Edgar Allen Poe’s skull, and a road adventure to protect the twins. Niles packs a great deal of information in this issue, and while it is great to know more information on all of the characters, it all comes flying fast and furious to the point it might be information overload.

Fiona Staples continues to serve up some wonderful art that fills the panel with information that you don’t know you needed until you go back and read the issue again. Staples treatment of Jules Verne is full of awesome, and the steam punk robot fits rather well in the current time period.

I like that she mixes up the composition in scenes where there is a lot of talking going on, as it makes the issue feel more alive than the dialogue alone. Her colors remain muted, which is a nice style for this book, but I wouldn’t mind seeing some eye popping color moment at some point down the line.

The X-Files has been off the air for a decade now, and there is still a need for stories that examine and explore those mysteries of the unknown. It’s almost certain that Poe’s skull is going to play a part in this story before it is all over, but for now, I’m really interested to see what happens next. At this point I’m almost positive there is going to be a twist that has been foreshadowed, but I’m still interested in how it is all going to play out. Mystery Society is a fast paced tale that offers surprises on every page. There’s just enough humor to keep the story light, with hints of a bigger darker story that keeps me coming back for more. Mystery Society #2 is definitely worth buying and earns 4 out of 5 Stars.