The war is finally upon us.  The Phyrexians have been identified as a full out threat and the Mirrans are starting to rally the forces for survival.  I made it to a prerelease this weekend and got to play with a good chunk of the new cards, so I think I can safely form an opinion now.

Wizards set up one of the coolest systems for this event.  Normally at a prerelease for the second set in a block you would get three boosters of the first set and three boosters of the new set.  Well, with Mirrodin torn completely between two factions at war, Wizards set that up for the prerelease as well.  We got our normal three boosters from Scars; however, the three boosters from Mirrodin Besieged were aligned.  You chose to represent either the Mirrans struggle for survival or the Phyrexian strive for perfection.  This was a fantastic idea and made the story come out that much more.  Also, it meant we got to choose our primary strategy as both sides were relegated to specific mechanics.  My choice, Phyrexian infection and it led me to a 3-2 record.  Not the best I’d done, but my losses were due to luck of the draw, so oh well, it’s still victory.

So far, I have been significantly impressed by the set as a whole.  The driving story behind the block rings through loud and clear and I love it.  So, let’s dig deeper and take a look at some of the new cards. First we’ll take a look at the returning mechanics:  imprint, metalcraft, infect, and proliferate.  We got some great new innovations on imprint, including a card that will be causing judge headaches as long as it is played, Myr Welder.  A three drop 1/4 that can get all sorts of fun activated abilities.  I just have to exile artifacts from graveyards; I think we can manage that.  And just to let you know, the imprint ability only works with the text on the card, not any other artifacts you imprint.  Metalcraft got some new guys, mostly more +2/+2 but a couple 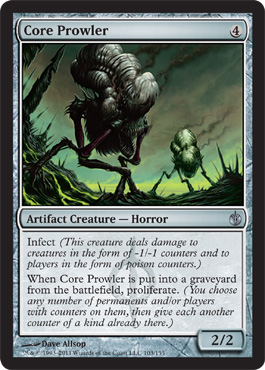 others gaining double strike or losing defender, and the stand out, Concussive Bolt.  Just trust me, it’s good.  Phyrexia gains a ton more infect creatures, spreading into both white and a little blue.  It also stretches the proliferation into black and green with single cards for each.  However, the coolest implementation has to be Core Prowler, just look at him.  Infect and proliferate on one card, pure awesome.

Now, onto the new mechanics:  battle cry and living weapon.  I’ve given Living weapon its due in my preview pack, but equipment coming with a creature attached is still pretty awesome.  Battle cry, on the other hand, hasn’t seen much love from me.  It’s good, really good actually all other attacking creatures get +1/+0 is awesome.  I just haven’t gotten to play with it at all.  I’ll go ahead and say though; I think Signal Pest is going to be something special. Now, for my top picks.  Again, Signal Pest is amazing.  The pseudo flying is going to make him very playable.  I love me some Myr, and all the Myr here are cool, but the Plague Myr has me the most intrigued.  Rodrigo would be upset if I forgot this guy, Thrun, the Last Troll.  A four 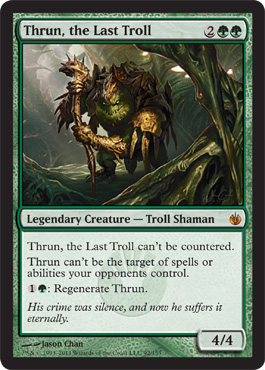 cost 4/4 that can’t be countered, can’t be targeted, and can regenerate.  This guy is amazing.  My favorite two cards though are both auras:  Phyresis and Corrupted Conscience.  I love them both for the exact same reason, anything can have Infect.  Yes, there was an equipment that gave it in Scars, but now, if my opponent is coming across for some lethal damage on his next turn but I have no poison counters, here have some infect.  And even better is the mind control effect on Corrupted Conscience, my mind is rolling with the possibilities.  Did I mention my winning strategy for the prerelease was Phyresis on a Manticore? 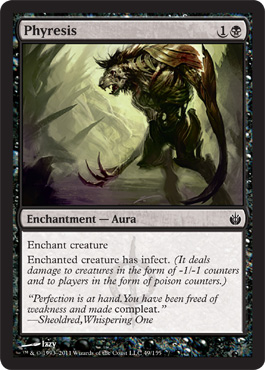 Mirrodin Besieged is hitting everything it needs to make the set fun.  At this point the only other thing I want is a way to get rid of my poison counters.  If that existed, even in some small form, the set would be perfect; as it stands it’s still getting a darn good 4.5 of 5 stars