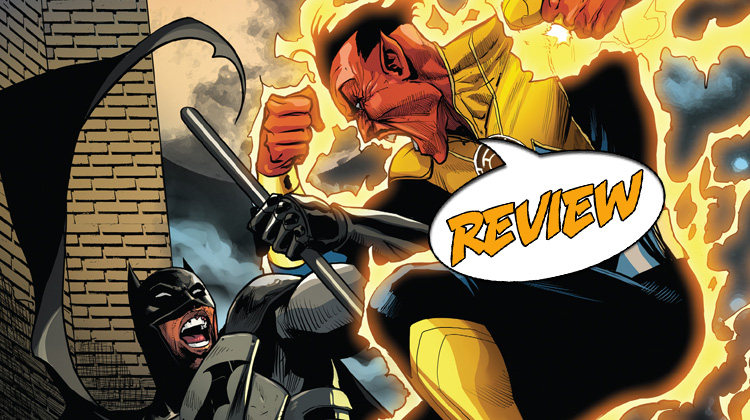 Jace Fox/Batman faces Sinestro, who uses fear in a new way to try to defeat him! Take the jump for our review of I Am Batman #15 from DC Comics.

SOLICITATION: A Dark Crisis tie-in issue! When Jon Kent first asked Jace Fox to join the new Justice League the answer was a firm “no”. But as Deathstroke and the Legion of Doom hunt the heroes of the DCU, Jace learns the hard way that there are some fights from which Batman cannot run, and the only thing he has to fear…is fear itself!

When I saw the cover on this issue, I was shocked! How in this world could Jace Fox resist Sinestro and his fear-powered ring?

Fortunately (or not), Sinestro’s m.o. has changed! Instead of using large yellow hand constructs or the like, his amplified powers give him the ability to make his prey confront their fears… and not in a good way, either!

This issue does point out a problem many baddies have when they take on anyone in the Bat-family: They want to beat them mentally! I mean, Sinestro just could have used his ring to squash Jace! Or squeeze him to death! There are so many ways his ring could have outclassed this (or any, really) Batman!

But villains want to prove they can take on Batman on his strongest ability—again, his mind! So far, no one has been able to take him down that way. It reminds me once again of Doctor Doom, when he was tired of losing to Reed Richards when it came to using science, turned to magic, which flummoxed Mr. Fantastic. A bad guy needs to change his tactics in order to baffle the Dark Knight! Playing chess with him is simply not going to work!

I was intrigued, though, by Sinestro taking on a more “devilish” way of confronting a foe. Normally, he DOES use his ring to overwhelm people he’s fighting against. This time, thanks to Pariah, he’s got something of an advantage in that he CAN use someone’s fears against them.

The odd thing is that, even with this serious advantage, he STILL couldn’t beat Jace/Batman! And Jace isn’t even the most experienced Dark Knight around, either!

The initial sequence where Jace apparently has killed Officer Whitaker followed by the surviving officer offering him her gun so he can “own up” for his mistakes. Yikes! That was spooky, but it was an interesting psychological attempt to take down the hero.

Then Sinestro says he will show Jace his fears, then have him beg to let him die. “I will give you the power to erase your existence,” says the Yellow Ringbearer. And he could, too!

I have to say that Jace does do an effective job of putting Sinestro in his place. I cheered when I read how Sinestro “messed” up during the final confrontation. Nice job!

Again, Sinestro truly should have pounded Jace into the pavement. However, he chose to confront this Batman in a battle of wits. He showed just how ill-equipped he was to fight Jace on this level!

This also reminded me of the time Bruce/Batman was going against the White Martians, all of whom had Superman-level powers. But the Dark Knight had figured out just what was going on and, with time to prepare, had the baddies begging for mercy before long!

That’s Batman for you!

The action sequences were excellent, showing just how “out of his league” Jace was against a galactic-level threat. I particularly enjoyed the way even reality (and Sinestro’s appearance) shifted by twisting from one form to another. Great!

The facial expressions, both on Jace and Sinestro, were really great. The dialogue matched what they were going through very well, and there was no question in our minds just how they felt. Nicely done!

This issue shows just why Bruce/Batman is involved in universe-level battles! Eventually, they do involve you one way or another! Now Jace facing his need to help in the Dark Crisis!

I’m still not sold on the notion of having a “diverse” Batman just as I’m not happy with a “diverse” Spider-Man in Marvel. Just give him his own identity, for goodness sake! I will say, though, that this issue made me “like” Jace a whole lot more than I had previously!

This issue could be titled, “The Devil Went Down to NYC,” and he met the Batman there! Good story!

Sinestro should have pounded Jace into the pavement. However, he chose to confront this Batman in a battle of wits. He showed just how ill-equipped he was to fight Jace on this level!