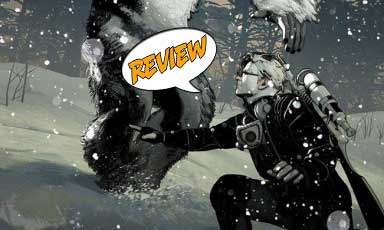 Hellcop Central may be quiet for now, but Virgil gets an alert from the Pacific Northwest. Can he keep a hunting mishap from becoming a major interdimensional incident? Find out in Hellcop #6 from Image Comics!

Previously in Hellcop: Virgil Hilts was on the run and trying to clear his name. It took a mad dash through Hell and assistance from some fellow Hellcops, but eventually he exposed the corruption going on in Hellcop Central. After some cleaning up, the captain at the center of this was apprehended. Not only was Virgil exonerated, but he was promoted to captain.

Hellcop #6 opens in the snowy woods of the Pacific Northwest. This is the beginning of a new arc and does not seem to tie in directly to past events, so if you have been curious about the book, this looks like a good place to jump on. A couple hunters, Eddie and Wil, walk through the quiet woods. They’re hunting out of season and hoping to avoid any pesky rangers when they see a lumbering form in the trees. Eddie shoots.

But when the reach the body, while it certainly looks furry, it also looks very humanoid and it is wearing a fancy necklace. Eddie decides it must be a sasquatch. This could mean fame!

As it happens, there is a Hellcop Outpost in the Pacific Northwest. Gladys is stationed there. Things are not too busy; to pass the time, she is playing a video game with her friend Angus and idly talking with him about aliens. She believes they exist; he does not. An incursion alert goes off, and she must investigate. This leads her Eddie and Wil who are now taking pictures. She claims to be with the FBI, and that they have killed a government experiment, or at least wounded it. She has them load it into her truck and insists that they hand over their phones.

Meanwhile in Hellcop Central, Virgil and Taj wait for Efren, their eccentric super-genius inventor. He talks about meeting Virgil at the last Christmas party, although they probably did not actually talk; he just imagined their conversation, which establishes that he is quirky. He is there to show them his latest version of a reality projector. To make a long story short, magic works on the plane of Hell but not very well at all on Earth. Technology goes the other way. The reality projector creates a small field where the local reality can be adjusted. In other words, magic could be used on Earth and technology in Hell.

When he turns the device off, a call from Gladys comes through reporting that they may have an interdimensional incident brewing. Virgil wants to handle this directly, so he uses a portal shortcut through Hell, where he is seen. Gladys meets him and takes him to the outpost. They think the injured newcomer is from the Rama clan. Virgil wants to get him home before his people come looking for him. Except that not only was he shot by the hunters, but he has a separate wound from a Sasquatch-sized blade. The incursion alarm goes off again. Multiple targets are heading into town.

In town, Eddie and Wil are in the local bar drinking and commiserating that none of their pictures were posted. And at that point, a band of Sasquatches arrive following a scent trail. They demand that the hunters turn over their prince!

A FUSION OF NORMAL AND OTHERWORLDLY

The art of Hellcop #6 is an interesting mix of backgrounds that appear to be based on photographs and characters drawn in. It is an effective blend that gives scenes a lot of depth and interest, and the colors of the backgrounds are muted enough that they do not take over in any of the panels.

Instead, the characters do stand out. There is some exaggeration to them. Wil, for example, is a skinny guy with a long neck and a big nose. His friend Eddie is a big, burly guy with thick, sausage-like fingers. As a pair, they come across as caricatures, hapless guys who inadvertently get themselves caught up in something big and beyond their control. It is weirdly amusing that, after thinking they killed a Sasquatch, their first thought is to take pictures of themselves with him.

Hellcop #6 opens with a major conflict for Virgil to handle with the added twist of the mystery of why the Sasquatch is here in the first place, and who injured him before the hunters.