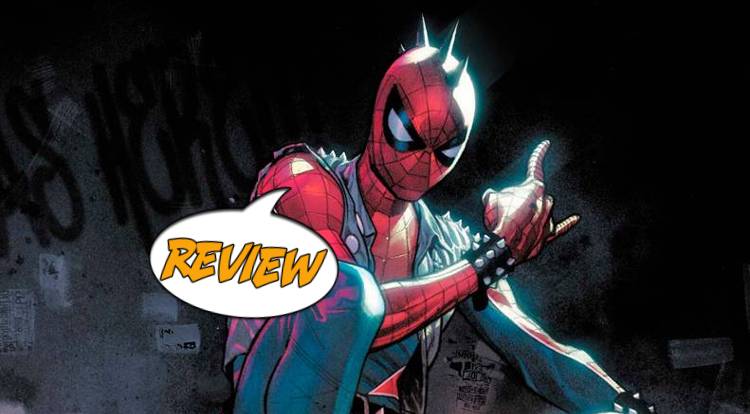 Hobie Brown may have struck a blow for anarchy when he defeated Norman Osborn, but the roots of corruption run deep. Your Major Spoilers review of Spider-Punk #1 from Marvel Comics awaits!

Previously in Spider-Punk: Hobie Brown is The Anarchic Spider-Punk, set to protect Earth-138 with his ax in hand and his chaotic band of punk rockin’ heroes backing him! Norman Osborn is dead, but will the chaos he’s created be too much for Spider-Punk and gang to handle?

Spider-Punk #1 begins with a fight already in progress, as Kraven (who in this reality is a neo-Nazi drummer) and his band, The Hunters, unleash hell on NYC with very advanced technology. Spider-Punk and Captain Anarchy arrive just in time to punch their evil in the face, bringing the bad guys to heel with indestructible shield and bashin’ guitar, but the mystery of how Kraven got his hands on high-powered laser guns remains. They return to “Spider-Base” (a name that only Hobie/Spider-Punk loves) and hand off the merchandise to their tech wizard, Riri Williams, a.k.a. Ironheart. She can’t track the guns, but it’s clear that they’re well beyond anything that he should have been able to access. Before they can figure out more, Kraven’s forces attack again. The trio of heroes engages them again, but just when it seems like they’ve won, Kraven sets off an explosive and reveals his ally: The Taskmaster!

IT WORKED FOR SPIDER-GWEN

First off, the fact that Earth-138’s Taskmaster is styled after Jerry Only of the Misfits amuses me greatly, but the star of this issue is Ironheart’s redesign. Mason combines punk sensibilities with established StarkTech and a few graffiti stylings to make a truly impressive new suit, one that’s easily as cool as Spider-Punk’s own. The tone of the art is equally loose and punky, fitting the character, though I’m still a little confused about the actual power structures of Earth-138. Ziglar’s script feels fast and heartfelt, and while I don’t think it’s going to be for everyone, I really enjoyed the touches that make it feel very personal for Ziglar and the creative team. I’m not the biggest fan of the muted color palette used here, but I understand what Lanham is going for, and I appreciate the use of dark reds and coppery oranges that give things a grungier, more street-level feel.

After his appearances in Spider-Verse and Spider-Geddon (as well as being the best alternate costume in Spider-Man for the PS4), I was happy to see Hobie Brown getting his own title, and Spider-Punk #1 puts a lot of good things together in the art and the story, earning 3.5 out of 5 stars overall. Like Spider-Woman/Ghost Spider/Spider-Gwen and Miles Morales before him, Spider-Punk takes peter Parker’s M.O. and gives it a new twist, and I’m excited to see what’s in store for him.

Ziglar leans hard into the punk aspects, while Mason's art and design feels appropriately hardcore for the world they're creating. It may not be for everyone, but it's definitely a good start.