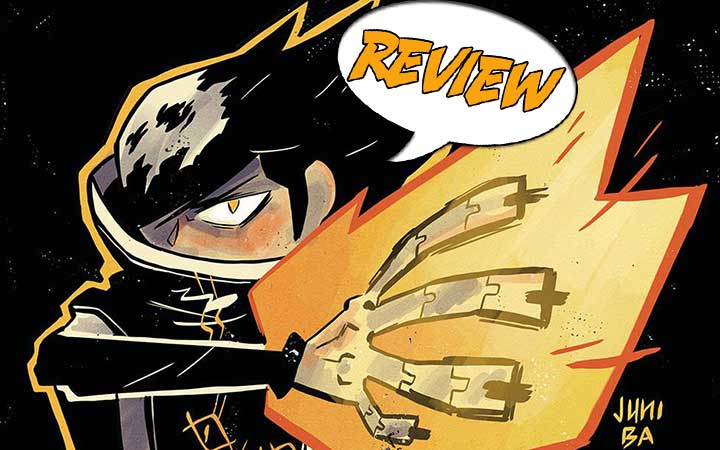 Monkey Meat Island, where magic meets capitalism, is a place for endless stories. What happens when a bullied young man gains incredible powers? Find out in Monkey Meat #2 from Image Comics!

Monkey Meat #2 is the story of a young man named Haricot. We meet him right from the start, and he seems pretty normal. He likes to read comic books. He failed his first year at university. While staying at home with his parents wasn’t much fun, it was easy. But they sent him to Monkey Meat Island to find a job. Even while living in a motel in a relatively metropolitan city, Haricot keeps to himself and reads his comic books. Until one day, when a tough guy beats him up for no particular reason. Haricot is certain of one thing – that he deserves justice, the kind of justice the heroes in his books hand out.

Then one day as he walks past a vending machine, a can of soda speaks to him. It claims to be a god possessing a can of soda and it’s getting bored. It notices his book and draws out his story. Then, much like an advertisement, it tells him that if he wants power, all he has to do is drink the soda. Haricot does, and the next thing we know, he is standing in the wreckage of the motel. Shortly after this, Thaddeus Lug from security arrives to help, but now Haricot claims he is a hero and he doesn’t need Lug.

Lug counters, asking if a hero would really destroy everything around him. Haricot insists that of course, he would if he had to. They get into a big fight. In the midst of this, as Haricot again insists that he is the hero, some bystanders tell him that he isn’t and that they hate him. This is a story that is all about subverting various tropes. Lug accuses him of just wanting excuses to do whatever he wants. Haricot counters that this is a good thing and continues beating up on Lug.

Lug finally asks him what happened to him. Why is he so angry? Why is he seeking vengeance? And it is because of normal, discouraging things – flunking out, being turned down for jobs, being laughed at. Haricot thinks that, now that he is strong, people will respect him. Lug asks him to consider the fact that he is now simply making life worse for many other people.

We would normally expect some kind of revelation here, but instead, a representative of the Monkey Meat Company shows up, apologizes to him, and offers to take Haricot to the people he is looking for. Lug urges him not to go, but he gets injected and Haricot goes on a grand rant about what he will do to his tormentors.

They are all in the motel staff room. There are a bunch of people there playing pop culture characters. The customers love them. They aren’t criminals. As the man explains, they are just dimwits who watch too much TV. There’s a thoughtful closure with Lug as well. But at its heart, this is a wild story of a young sociopath who has no redemption arc, and I think it is quite the social commentary.

The art of Monkey Meat #2 is energetic and full of style. It’s mostly black and white with strong line work and great use of shadows. As the story progresses, some color is used, which immediately draws the eye to the important part of the scene. Later, orange is added as a second accent color. I like the way the color plays around the page, from being a character detail to being one of the main sound effects, to help show the action in the fight scene.

Haricot goes through an amazing transformation. He starts off as a normal young man. I’m sure there are plenty of readers who can identify with him. But when he drinks the magical soda powered by a dark god, he becomes a stylized character such as one might see in manga, complete with spiky hair (with a skull design in it) and a cool, dark outfit with a high collar. He is the embodiment of having great power and taking no responsibility for it.

Monkey Meat #2 is odd and unexpected, but surprisingly thoughtful. It is entertaining, and I think it fits well as an anthology issue. It would be difficult to take Haricot anywhere further, especially if he resists growth.

Life on Monkey Meat Island is interesting and unexpected.