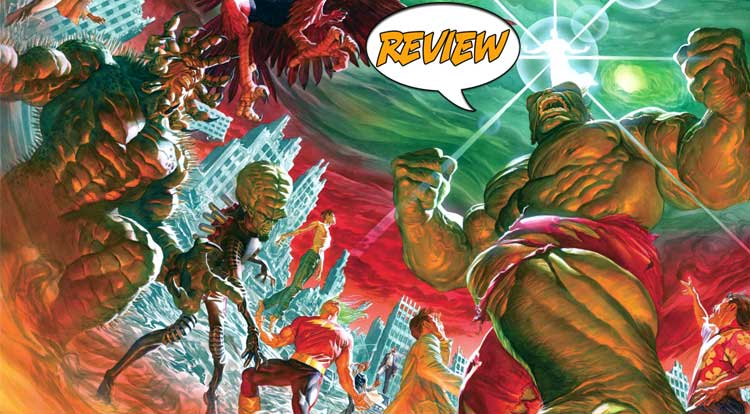 The end is here.  Your Major Spoilers review of Immortal Hulk #50 from Marvel Comics awaits!

Previously in Immortal Hulk:  Down in the Below-Place, the Hulk searches among the ghosts of the past for the answers to all his questions.  The One Below All, the Green Door, Samuel Sterns, Jackie McGee and Bruce Banner…

It’s all been leading here.

OF HELL AND OF DEATH

Immortal Hulk #50 begins in 1901, with one Robert Sterns, the great-grandfather of The Leader, and his own brush with radiation and anger, leading us to The Below Place.  Jackie Magee, the original childlike Hulk, and a newly cosmic-ray powered Joe Fixit, walk across a ruined landscape towards a strange fortress… the fortress of The Leader.  The Trio tries knocking on the door (read: Fixit smashing the door at full power), but it takes a breakdown from Hulk to make the breakthrough, only to leave the Hulks in a hell consisting of their own dead friends.  Jackie is forced to face her father, Joe Fixit, his metaphorical dad Mike, the casino boss, and Hulk?  Hulk faces the One Below All, the creature that lords over the gamma-powered Hades.  The two Hulks are forced to work together to extract Samuel Sterns, only to have to face the big question:  Who are they… and WHY are they who they are?

Ewing pointedly removes Bruce Banner from the equation here, forcing his alter egos (for all intents and purposes a literal baby and a rebellious teenager) to unravel the One Below All’s psychoanalytical claptrap, leading to several truly powerful and impressively constructed moments.  Joe Fixit’s realization that his maturing beyond Hulk came from his makeshift gangster dad leads Hulk to his own satori, and a powerful moment of clarity and forgiveness for the Hulks, thanks to the now-dead Devil Hulk.  This issue’s art is a step down from what I’ve come to expect from this title, something that I attribute in part to multiple inkers, but the coloring makes up for some of the issues, especially the vivid greens and reds of radiation.  Bennet once again draws The Thing in an incredibly bizarre manner, though I have to say that Grimm’s joke about “having the set” now that he’s visited Hell AND Heaven is almost worth the price of admission.

Speaking of that price tag, this book’s $9.99 is a hard pill to swallow, even if you’ve been following along since the beginning, and almost (combined with Joe Bennet’s recent anti-Semetic remarks) convinced me not to read or review this final issue.  I’m mostly glad that I did, though, as The Immortal Hulk #50 wraps up the series with aplomb, with heart but most of all, with some positive growth for Bruce and his Hulks, earning a very well-deserved 4.5 out of 5 stars overall.  It’s been a long and entertaining journey for Bruce, and with the Green Door closed forever (whatever that means in comics), a new era for The Hulk is in the offing, but I very much like this ending to this excellent series.

Bruce Banner's alter-ego(s) literally go through hell, but it all ends as well as it might have, including the last word on The Green Door. Well worth a read, even if the artist is on my avoid list.