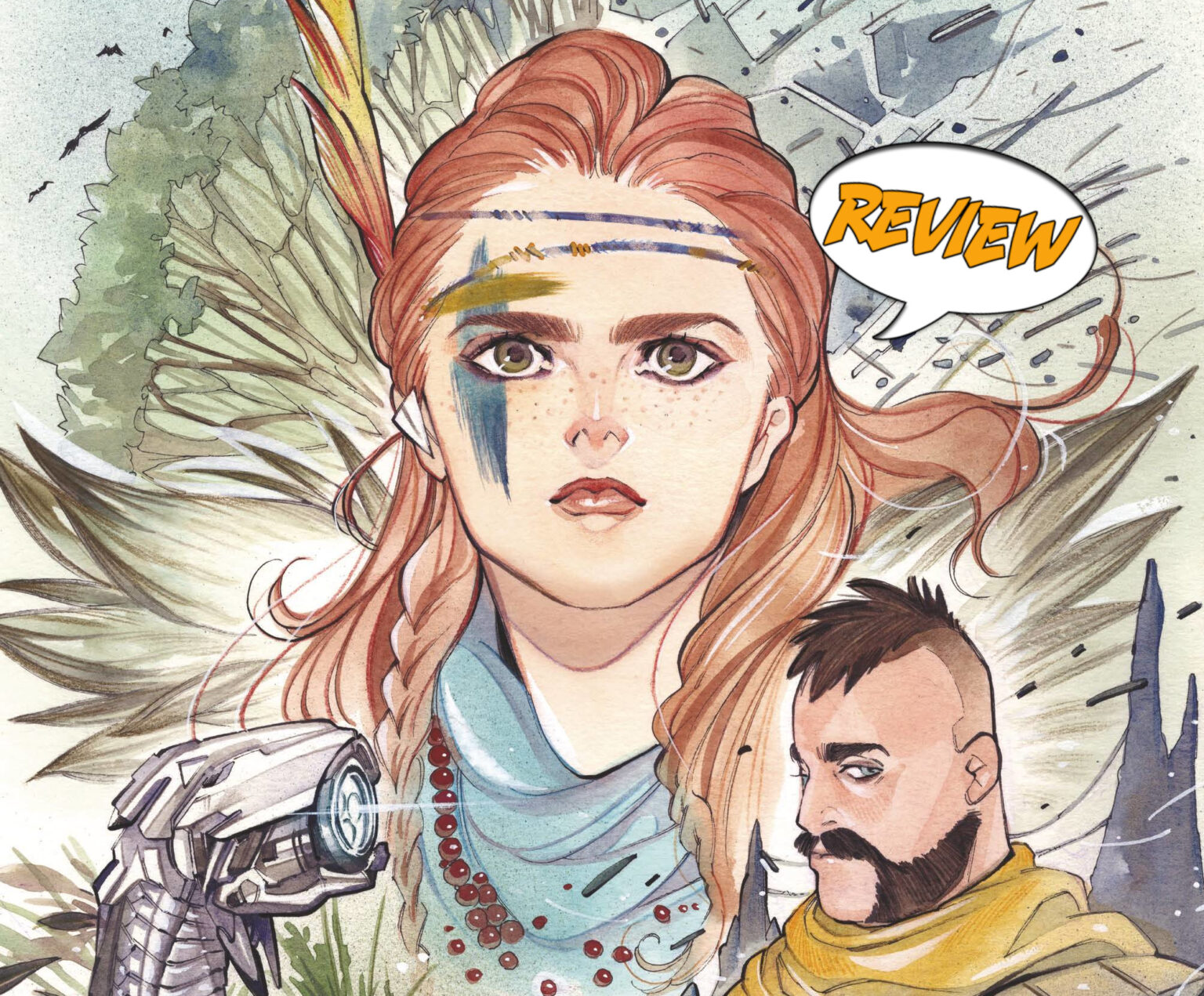 Horizon is Earth remade after a cataclysm. Erend has requested Aloy for help in searching for Korl, a dangerous fugitive. Find out what happens in Horizon Zero Dawn: Liberation #1 by Titan Comics!

Previously in Horizon Zero Dawn: Horizon is a lust, thriving world that has a new dominant species. These massive animal-like robots serve as guardians for the new ecosystem of Horizon. Aloy is a machine hunter looking for the Eclipse Cult, but when Erend needs help she hears his tale.

Horizon Zero Dawn: Liberation #1 begins with Erend trying to convince Aloy’s help in hunting down Kohl, which Aloy reluctantly agrees. During the trip, Erend tells Aloy the story of why he is all riled up. Erend and his sister, Ersa, fought against the Sun-King with Korl. During an ambush to rescue some prisoners, Ersa was captured. Her punishment as a prisoner was to fight unarmed in Sun-King Jiran’s arena, called the Sun-Ring. Ersa opponent is a Ravager, a canine-like machine. Stranding her ground, Ersa finds a rock and manipulates the machine’s movements to give her the space to kill a guard. Ersa then takes the guard’s bow and shoots the machine dead! Victorious, she waits for her next challenge. Meanwhile, Aloy realizes that Korl is aware he is being tracked and has cut down a bridge on his path. And the only way to cross this canyon is through a path of Ravagers!

WHAT IS THE REVEAL!

I wanted to start my review of Horizon Zero Dawn: Liberation #1 by saying that this book is beautiful. Every page was a treat to look at and it impresses me how well they were able to capture the look of the video game. I found this especially true of the terrain. The backdrops were beautiful but did not overshadow the main characters and objects of interest. Great work by Elmer Damaso here!

My biggest struggle with the book had to do with character motivations. This story was primarily Erend informing the reader why he is hunting Korl. Which is a great hook for a first issue if we actually found out the reason. It almost felt like this issue needed another five pages so I could understand what is going on. Now, the story was well written and well executed but it was as if I stopped reading in the middle of a chapter. I imagine that this will read better as a trade paperback where we get the full context.

Video game comic books are hard. The most epic thing that the characters will do is generally in the game and the supporting comics just fill in backstory and lore. I think this comic is suffering from that. We are filling in some character history instead of doing the action pact stuff a video game usually has. Hopefully the pacing of the book will pick up next issue.

BOTTOM LINE: NOT THE GREATEST EXECUTION

Horizon Zero Dawn: Liberation #1 has some great ideas but does not give us enough of the plot to be hooked. Luckily, the art is amazing and is worth the price of this comic. I think this is worth a read if you are familiar with the video game but I would wait for the trade paperback for everyone else. 3.5 out of 5 from me and I’m interested to see if we will get more context next issue.

7.0 Not the Greatest Execution

Horizon Zero Dawn: Liberation #1 provides a lot of good backstory but fails to hook the reader into the main plot.