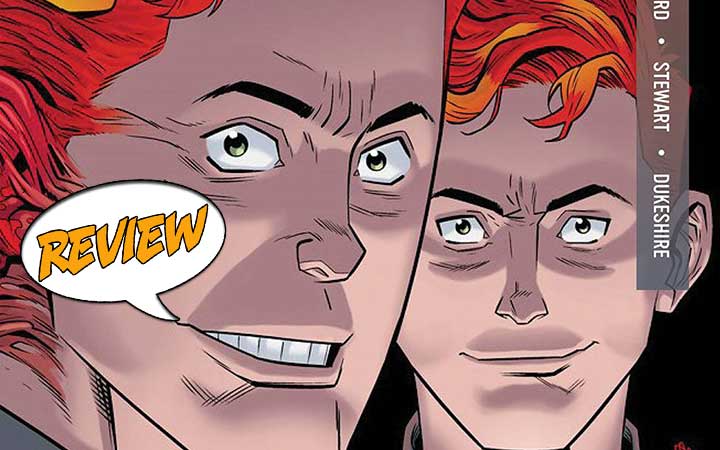 Captured by a depraved cult, Dennis’ only hope might just be a team of serial killers headed up by his nemesis. Your Major Spoilers review of Vinyl #2 awaits.

Previously in Vinyl: Serial killer Walter has sealed himself in an underground bunker with a sunflower death cult. Now he’s being hunted by an insane myriad of Husks, Sunflower Girls, and monsters.

Vinyl #2 begins with the leader of the Sunflower Cult staring through a window at the bloody faces of a pair of twins. She’s speaking on the phone with a mysterious “mother”. In a room elsewhere Walter and abducted FBI agent Victoria are talking about what’s going on and why they need her help. Things then flashback a couple of days and we see Walter talking with the twins. He’s trying to enlist their help for his mission to rescue his frienemy, Dennis. They’re resistant at first until he says that they can essentially create their own horror movie in the bunker, with no rules. Back in the present, the twins encounter a team of mercenaries and with the help of another murderer, they kill them all. Back in the control room, Victoria and Walter argue and he let’s her go. As she attempts to leave she comes face to face with one of The Sunflower Cult’s husks, that’s when we’re introduced to yet another murderer.

A PREMISE THAT KEEPS IMPROVING

Vinyl #2 continues to escalate on the foundation that was laid in the first issue in high quality ways. What started as a case of a bunch of monsters locked in with a bigger monster, has now transformed into a story of a team of monsters locked into a chess match with a bunch of other monsters with tricks up their sleeves. The most interesting aspect of this issue though is a bit of world building that I wasn’t expecting. Without saying it explicitly, we get glimpses of a sort of community of serial killers that know of each other and interact each other. Kind of like how John Wick established a secret world of assassins. What’s nice though is that it doesn’t linger too long on this idea, it reveals exactly what is needed to push the story forward and have it make sense, which is a sense of efficiency I can appreciate. Not everything is perfect though. There are a couple moments of clunky dialogue and weird sequencing of panels that don’t convey what is happening here in a clear way. Particularly, the last couple of pages. Also, while the previous issue utilized gore and blood in an effective way, things go a bit over the top here into cheesy horror flick territory, which might be the point, but if so, the point isn’t made well.

In a story that is essentially about a murdering trying to rescue his friend from a cult with zombies, this is showing some unexpected depth. Vinyl #2 succeeds via the utilization of restrained escalation The revelation of a community of killers, mixed with the revelation that the cult isn’t going to just sit down and take it, makes this a compelling issue in this series. 4 out of 5 stars.

Vinyl #2 manages to up the game from the first issue in meaningful ways that not only make the story more interesting, but establishes a world that has room for exploration.