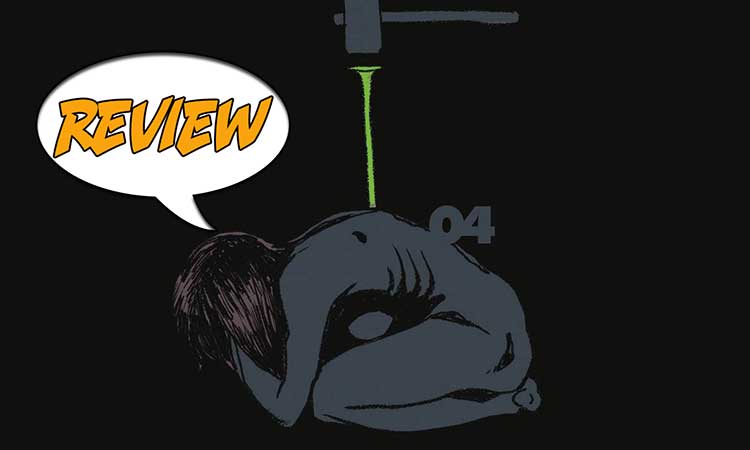 In Fear Case #4, Winters has received the Fear Case, an object of terror for centuries. Will his obsession lead him to a fatal mistake, and how will his partner Mitchum deal with the aftermath? Find out in your next mighty Major Spoilers review!

Previously in Fear Case: Secret Service agents Winters and Mitchum have been partners for years, and are now investigating the legendary Fear Case, an object associated with death and destruction for millenia. Their investigations have led them deep into the heart of a conspiracy that has penetrated deeply into the US security establishment. It is when Winters receives the Fear Case from a cult member, that things really begin to go downhill…

THE OLDEST AND STRONGEST EMOTION OF MANKIND IS FEAR…

Fear Case #4 brings this mini-series to a compelling denouement, with the bad guys getting their comeuppance, and the good guys…less so.

Congratulations to Matt Kindt for coming up with a really simple idea for the series, which provided enough juice to power it for four issues. A case (in its modern iteration, a boring black briefcase), that when opened exposes the opener to…something evil and unknown. The disasters that have beset mankind – war, war and some more war – are laid at the feet of the Fear Case.

But as is ever the case with humanity, all the way back to Pandora’s Box, the need to know, to understand, is more compelling than any spooky stories about death and disaster that linger. Going back to ‘Kolchak’ the modern horror story has heavily leaned on shadowy forces, usually the government, attempting to either suppress information about the otherworldly, or suppress it and co-opt it. You saw that most clearly with The X-Files and to a certain extent, with its opposites attract partners and government efforts to hide/reclaim the alien, Fear Case follows that template.

Winters and Mitchum make for an intriguing partnership. It’s very much in the Mulder/Scully being, with Winters being the believer, and Mitchum the intrigued skeptic. They definitely have a very strong bond, demonstrated in the devastation Mitchum feels at the end of Fear Case #4. It’s refreshing to see such a strong bond depicted in this way.

There’s a slightly surreal aspect to the storytelling in Fear Case #4, most clearly with the artwork by Tyler Jenkins. While the investigative aspect of the artwork is as you’d expect – anonymous interview rooms, plenty of government buildings, forensic teams in HASMAT suits, it’s all done in a loosey-goosey art style that suggests that reality is about to collapse in on itself, with the Fear Case at the dead center..

Indeed, there are isolated panels in Fear Case #4 where reality abandons itself, and the unreality, engendered by the case, intruders. Scenes from a play about the Trojan War, with two empty seats in the auditorium, are suggestive. Images of war from the past, of lynched African Americans, of Hitler and Trump and witches burning at the stake indicate the violence and mayhem underpinning our civilized world. And the shocking image of a giant tentacled prawn creature crossing the landscape at one point tells you all you need to know about what might be lurking within the Fear Case’s infinite margins. Special mention goes to Hilary Jenkins coloring, with its pastel, layered look.

While the Jenkins’ get down with the artwork, Kindt isn’t far behind. Mitchum is clearly a broken man by the end of Fear Case #4. His partner has sacrificed himself to save Mitchum, and the government, for whom he has worked decades, has betrayed him. The only way forward is through vengeance, and the revenge Mitchum gets is the bleakest sort. In a way, solving the matter of the Fear Case has only opened up future horrors, and Kindt leaves it to the reader to imagine how bad the carnage will be.

BOTTOM LINE: OPEN AT YOUR OWN RISK

Fear Case #4 is a great final issue, providing a satisfying sense of closure, even if the penalty paid by the main characters is too high. There’s a delightfully creepy atmosphere to proceedings, and the central mystery of what is inside the case is cleverly preserved.

Artwork and writing mesh very will in Fear Case #4. While the idea that man’s inhumanity to man is linked to the supernatural, Kindt doesn’t absolve us totally of our sins towards one another. You have to want to open the case in the first place to be the cause of mortal sins, and there’s plenty of sinning to go around.