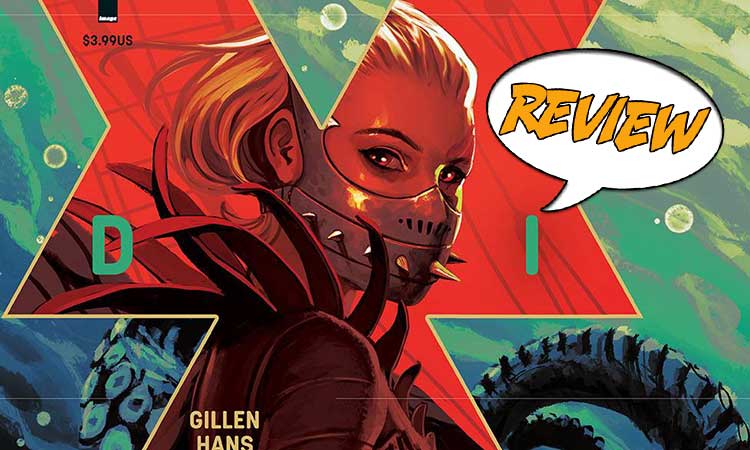 In Die #16 from Image Comics, after the war within the world of Die, our party of friends and adversaries seek the center of Die, in an effort to return home. Can these irretrievably broken humans find a way back to Earth before Die consumes everything? Find out in your next mighty Major Spoilers review!

Previously in Die: Where to begin? In 1991, a group of friends played a role playing game set in the world of Die. Little did they know that the gamesmaster, Solomon, had created a world that could be entered. And so they did. Two years later, the teenagers re-emerged, refusing to tell the world what happened to them. Almost twenty years later, as adults, they return to Die, and begin to upend Solomon’s creation. While seeking to escape, they manage to upend the careful balance of the world, setting realm against realm. And now, as they seek to escape this broken world, they must somehow put themselves back together…

The idea of people in the ‘real’ world finding them transported into another world, or a game environment, isn’t a new idea. Famously ‘Tron’ did for movies what Joel Rosenberg did for fantasy novels with his series ‘The Guardians of the Flame’, sending people into a gaming world to battle for their lives. In recent years, the whole litRPG movement sees novels combine the tropes of computer gaming with science fiction and/or fantasy settings.

So in a sense Die #16 continues a long-ish tradition. What writer Kieron Gillen has brought to the table is an adult sensibility, of people who were once friends, who have been broken by the experiences of their adult lives, and are now whisked away to a fantasy world that should be a dream come true, but overall, has turned out to be a nightmare.

Similarly, as the series has progressed, the unique structure of it has become apparent, as the world of Die seeks to complete a sort of time ring, locking in the key events of its creation. Our heroes have resolved to stop this from occurring, but so far, their luck has not held.

The key to enjoying Die #16 is to realize that these characters have been with each other for a very long time. They have endured much, and even if they’ve had their differences over time, in this one instance, trying to escape Die, they are basically as one. The characters and their motivations are well rounded. They feel lived in, with their hopes largely dashed, their fears largely realized, and yet they keep moving forward, always searching for that little spark of hope.

Two of the main characters, Chuck and Dominic, stand out, mainly because they have the best lines, but also because they may be the more rounded characters. Popular fantasy novelist Chuck is the fool in the party, whose stuDied insouciance garners the group extra luck in the fantasy world. He gets all the funnier lines, including this little gem, ‘I think being sober for one more second is the real irresponsible thing.’ The fact that he is dying makes his comedy value that much more poignant.

Dominic is an even more interesting character – she is a Dictator, someone who’s very words can influence anyone who can hear them. As Gillen says in the Die RPG he has created, this makes for a very problematic situation and character, as anyone can be forced to agree to anything. That Dominic is masked for much of Die #16 tells you a lot about how much her former friends actually trust her – and despite that unease, still need her.

THE DIE IS CAST

Kudos to artist Stephanie Hans, whose artwork brings to vivid life the myriad peoples and settings of Die. The use of color throughout Die #16 is exquisite, particularly the scenes where Dominic is menaced by a Fallen – the scarlet wash throughout brings an extra edge of menace to the scenes, which are confronting enough. Similarly the grandeur and mundanity of Die are both handled equally well, with the barroom scene a favorite, as is the realization that this particular segment of the story is inspired by HP Lovecraft.

Die #16 continues the adventures of the teenagers turned adults who once again find themselves trapped within the dangerous world of Die. As can be expected, this isn’t a title or even a game for kids – the themes of life and death feel more real than any fantasy roleplaying game can conjure. The artwork is strong, and the characterization is compellingly realized.

A journey to the center of the world can give the impression there’s lots of pulpy action along the way. Instead, Die #16 takes a more cerebral route to its goal, depicting characters facing unimaginable odds all through the prism of their experiences and broken lives. Die #16 is a superior read, and an issue full of startling and stunning artwork.