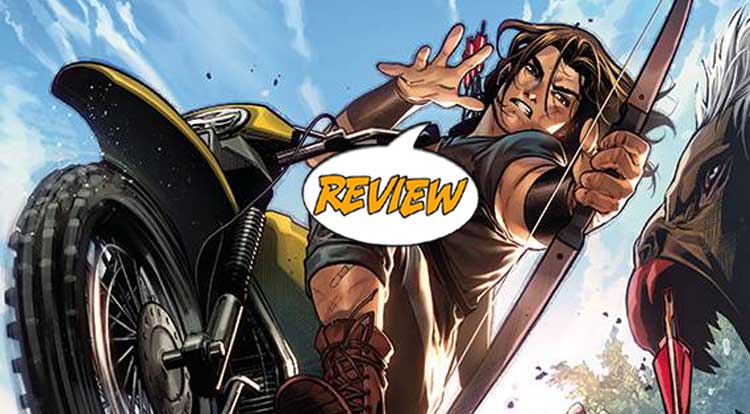 One brother is inside Fort Apache.  One has been exiled for a crime he didn’t commit.  Your Major Spoilers review of Gung Ho: Sexy Beast #3 from Ablaze Publishing awaits!

Previously in Gung Ho: Sexy Beast:  Archer is exiled from Fort Apache. In front of all the inhabitants,  Kingsten withdraws his right to seek refuge in any colony whatsoever.  He is tattooed with a cross on his forehead, a mark that makes him an outlaw… and virtually guarantees his death by the reapers, having to live outside the walls of any safe haven.

Our story opens moments after Archer has been thrown out of Fort Apache, as Zack rages against the Powers That Be for a rape that he didn’t commit.  Worse still, Kingsten, the leader of the settlement, knows he’s innocent, in the hopes that the actual rapist can help them to get additional resources from the central council.  It’s the proverbial devil’s bargain, made worse when Zack is forced to DRAW a name from a hat to decide which family he is going to live with, as all the families in the colony have refused to take him in voluntarily. On the outside, Archer holes up in one of the abandoned lookout towers, playing his guitar and killing any walkers that arrive, until his food and gas run low, but the brand on his forehead marks him as a criminal to everyone who sees him, and they all refuse to help.  As for Zack, his new “sibling” has a secret to show him… if he just puts on a blindfold to go with him.

I was quickly drawn into this book, and I’m pleasantly surprised how enjoyable a read it turned out to be.  Even without any previous knowledge, the story and art work so well that I was immediately invested in Zack & Archer’s lives, especially when it becomes clear that there are monsters in them thar woods.  Von Kummant’s art is lush and well-colored, reminding me a bit of Pixar-style animation, only with a wider range of expression.  I was especially impressed by moments like Archer’s impromptu concert during a rain storm, a moment that feels epic and somehow intimate at the same time.  The story here is complex, with a lot of players and a lot of unexpected conflict, but it never feels like PCs in a world of faceless folks.  Everyone in the issue has personality and their own life, and the book is all that much better for it.  I’m reminded of ‘The White Mountains’, an adventure strip that I was a fan of as a child, and I’ve gone back to buy the previous issues of this book for more.

BOTTOM LINE: THIS IS GREAT

In short, Gung Ho: Sexy Best #3 is a hit, a comic book with beautiful art and a really entertaining story combining for a truly impressive experience, earning 5 out of 5 stars overall.  I didn’t know what to expect coming into this issue, so I’m pleasantly surprised to have a new favorite comic book.  It’s that good.

This issue convinced me to immediately go back and buy the rest of the series. What more is there to say?