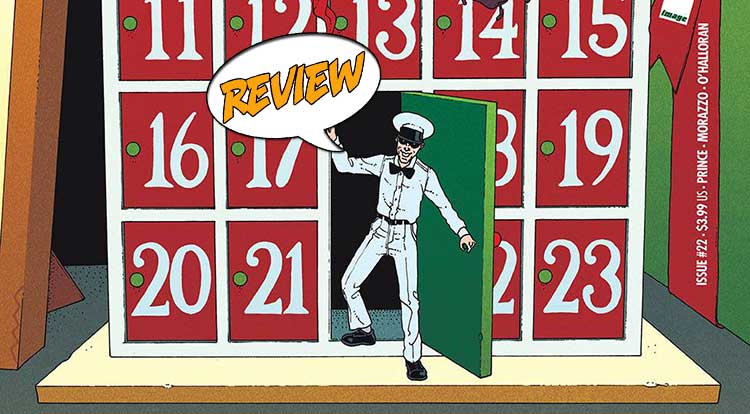 In Ice Cream Man #22, Julie takes up an Advent calendar to help celebrate the Christmas spirit, but finds hardly anything uplifting as she struggles with a life-changing decision, all in the shadow of the Ice Cream Man.  Will she be decking the halls, or running for her life?  Find out in your next mighty Major Spoilers review! Previously in Ice Cream Man: Nightmare fuel for a world gone to hell, Ice Cream Man has spent the better part of two years chronicling the many, many ways life is hell, and there’s no escaping it.  W. Maxwell Prince delights in pointing out the absurdities of modern day life, the way we have become alienated from each other despite yearning for some sort of connection, all the while the Ice Cream Man is busily working away to make life a living hell for the protagonists of each issue.  And now Christmas is well and truly in Prince’s sights…

THIS GIFT IS NON-REFUNDABLE

Julie is your typical teenager, trying to celebrate Christmas with a father who says he hates it but participates anyway, and a mother whose religious inclinations are polar opposites to her own.  Oh, and did I mention Julie just found out she’s pregnant?  And that something is awfully off about the Advent calendar she’s started opening?

Welcome to Ice Cream Man #22, where the sense of dread increases as each little Advent door is opened.  It might be a chocolate egg, or a nice necklace…or the carcass of a very large, very intimidating looking cockroach.  When the Ice Cream Man is in the house, who can tell?

Typically, Ice Cream Man takes a character and pokes and prods at them until the cracks underlying their character open like a gateway into Hell, which is invariably where they end up, or some facsimile of it.  Ice Cream Man #22 is a little different, where amidst the horror, there are reasons for hope.  It must be the season that has got writer W. Maxwell Prince all giddy…

It maybe my exhaustion with the year, but the approach taken with Ice Cream Man #22 is something I really welcomed.  Yes, there’s that familiar feeling of dread that Prince so artfully weaves, aided and abetted by Martin Morazzo’s art, which always feels like a fever dream ready to explode and overwhelm not only the characters, but the reader as well.  On the flipside, Jule and her predicament (or situation might be a better term), and how she deals with it, offer reasons for hope.  Her boyfriend is supportive and understanding, and while her parents (including her father who seems particularly keen on blowing his brains out as a means of expressing his supposed disdain for Christmas) come across as loving and kind.  Julie’s eventual choice is her choice, made without pressure from those around her.  It’s a refreshing take on a difficult topic.

All this isn’t to say that Ice Cream Man #22 abandons the doom and gloom entirely.  Indeed, for much of its length, the issue positively delights in giving the impression that Julie’s entire existence is about to unravel, with the Ice Cream Man grinning from the shadows.  The use of an Advent calendar is genius, giving the issue a strong structure, as Julie has to wrestle with her decision while facing a variety of seemingly sinister situations.  Her dreams haunt her, ducks keep on showing up at odd moments, the barista looks like he’s ready to murder her, there’s something slightly off with her therapist and her mother’s constant singing only underscores the tension Julie is feeling.  Prince and Morazzo are masters of making the mundane unsettling, turning the everyday into something sinister and dismaying.  This is horror at its most subtle, leaving the reader with an abiding sense of unease, even when Julie’s story comes to something of a bittersweet ending.

Ice Cream Man #22 eschews what readers of the series have come to expect.  While there is mounting unease, Julie’s real, real world problem is scary enough for her.  All the added extras we see in the issue – her mother’s singing, the strange people she meets, the foreboding dreams, are all window dressing for a story that deals with a real world issue.  While Julie’s decision is not one that everyone will agree with, you cannot deny that the issue’s final words aren’t uplifting in their own right.  And after a hell of a year, they are words that still resonate and inspire.

Ice Cream Man #22 infuses Christmas with a feeling of unease and dread, while our main character wrestles with a life changing issue. Julie is Prince’s most appealing character to date, a young woman confronted on all sides, but who wins through to the end more or less intact.