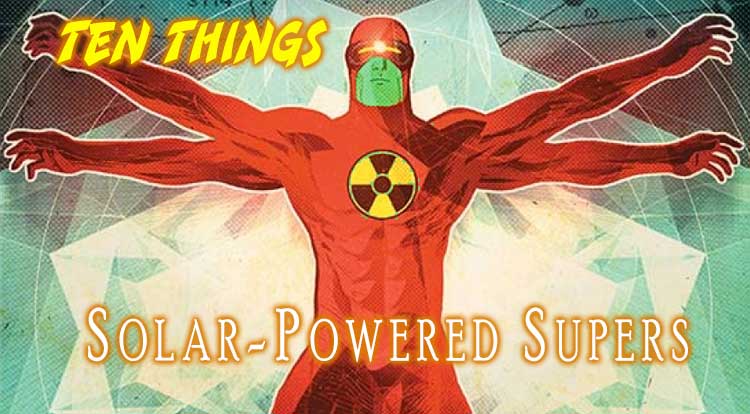 Whooshman-Bicarbonate Films, in conjunction with An Amateur Comics Historian and the four different guys who are all apparently the same Solarman, Presents: Bright, popular and sporty, Elena Amamiya transforms using her magic pendant and pen.  As the yellow (or orange?) hero of Star☆Twinkle Pretty Cure, she is a fierce combatant with a wide array of offensive moves.  She is also biracial, as her father Carlos is from Mexico, and Elena has inherited his skin tone and inexplicable blond hair. Hailing from Earth-295, The Age of Apocalypse reality, this Hulk (real name unrevealed) is powered by solar, rather than gamma ray energy.  A member of Weapon Omega’s Black Legion, he was only seen once, attacking a group of time-lost X-Men, along with counterparts of Ghost Rider, The Sentry, Cloak, Venom and Doctor Octopus.  There’s also a character who combines The Thing and Chamber who doesn’t make any sense at all. One of the “gods” of the 2013 Recurrence, she was once just a British schoolgirl name Emily Greenway.  Achieving whatever divinity the characters of ‘The Wicked + The Divine’ achieve on her 17th birthday, Amaterasu caused some consternation due to taking on the aspect of a Japanese Shinto goddess.  She was killed during a fight with fellow young god Sakhmet, during which she destroyed the entire British Museum with her fiery powers.  She once transformed into a small sun out of anger. Not to be confused with the telepathic dog who is an associate member of the Guardians of the Galaxy, Cosmo (real name and planet of origin unrevealed) is a member of the Shi’Ar Imperial Guard.  First seen attacking the Xavier Institute, he was handily beaten by Cassandra Nova, after which he was effortlessly killed and burned to ash by Vulcan, the third Summers brother.

Even by the standards of the Imperial Guard, he’s an incredibly minor and easily defeated character. After his rocket was sabotaged, Jim Wilson was hurtled into the heart of the sun.  Rather than dying, he was imbued with incredible powers from the combination of the solar rays and the ship’s fuel.  super-strong, invulnerable, able to fly and generate heat and flame, Ajax is sadly powerless at night.  He made sixteen appearances before vanishing in 1943, but that costume cements him as one due for a ‘Project Superpowers’-style revival. Thanks to a weird plot point in her first appearance, Mary Mitchell was canonically first active in the 1920s, with most of her heroic adventures takin gplace in the late 40s.  At one point, she replaced Toro as the sidekick of The Human Torch, before vanishing in 1949.  However she got her slowed aging abilities, they weren’t enough to keep her from being a retirely elderly woman by the year 2015, when she shared one last adventure with Ant-Man. Once the arch-villainous counterpart of the hero called Starbright, “S” Siezmanski’s motivation for villainy seemed to be due to repeated high school humiliations.  When Starbright was killed, S was shocked to find that the hero was nothing like she expected, and was instead a truly nice, normal guy.  Finally choosing to deal with her issues, she gave up her life as a villain, transitioned to life as a woman and replaced her old nemesis as a superhero.  During her last appearance, she hadn’t chosen a first name, but had toyed with Sally and Sarah, while absolutely rejecting Simone as too close to her pre-transition first name.

An alien of an unnamed vulpine alien race, Remi is the girlfriend of Ellarien, who was given the power of the Purple Solar Ranger.  Working with a team of displaced former Power Rangers, thrown outside of time and space by the events of ‘Shattered Grid’, Ellarien restored the prime reality, after which she empowered Remi, with both Rangers setting out to assemble a new team of Solar Rangers.  Whether or not they succeeded has not been revealed as of this writing. Knowing that fossil fuels were limited, Arthur Dearborn set out to find a more sustainable source of energy, building an orbital platform to capture and channel solar radiation.  Thanks to an experiment gone wrong, Arthur was transformed into pure microwave radiation.  Though not a bad man by all accounts, his loyalty to the corrupt Roxxon Oil conglomerate has led him to clash with the heroes of the Marvel Universe a time or two.  In one reality, Arthur is a member in good standing of the future Avengers team. After seemingly dying at the hands of Doomsday, Superman fell into a death-like coma until he could absorb enough solar energy to revive.  When he did, he found that his hair had grown out, and chose to keep it that way to make sure everybody knew he was all about truth, justice, business in the front and party in the back.  I blame Nicolas Cage.

This week’s topic Ten Solar Powered Supers, is all me but feel free to follow along @MightyKingCobra for more Ten Things madness on Twitter!  Or, you can check out the full Twitter archive here!  As with any set of like items, these aren’t meant to be hard and fast or absolutely complete, if only because gaining powers from the sun was once as common as nanites were in the 90s.  Either way, the comments section is below for just such an emergency, but, as always: Please, no wagering!