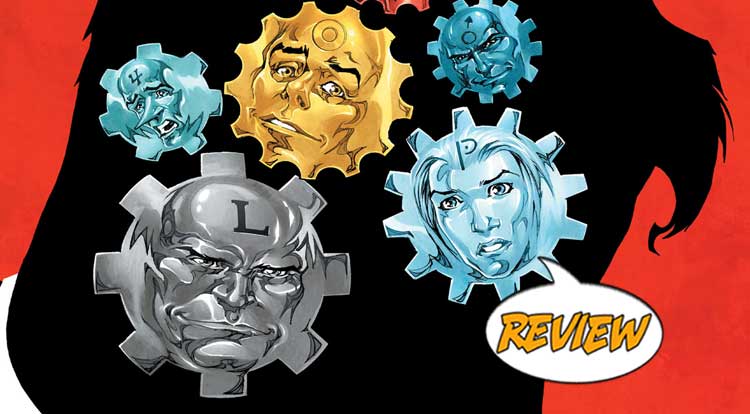 The Metal Men face their dark counterparts in final battle, in the heart of the Dark Universe!  Your Major Spoilers review of Metal Men #12 from DC Comics awaits!

Previously in Metal Men:  Is there more for the Metal Men out there in the world that can give them purpose?  And what’s the fate of Nth Metal Man, belonging neither on his world nor ours?  Everything will be answered, including some unanswered questions Tina has for Magnus!

The Metal Men have fallen to the attacks of the Plutonium Man, with only Doc Magnus and the (UGH) Nth Metal Man left standing.  The villain monologues that all is lost and that the heroes have fallen, just in time for Magnus to sic his robot dog, Rusty, on him, revealing that he’s actually Doc’s first non-metal creation: A mechanoid made of carbon!  Rusty holds off the radioactive villain long enough for Nth to bond Doc’s mind into the fallen Alloy, letting him speak directly to his Metal Men.  Platinum is the first to awaken, and the others quickly follow, just in time for the ol’ Deus Ex Machina in the form of Sideways.  (Remember Sideways?  He was one of the New Age of DC Heroes books a while back, also written by Dan D.)  Rusty causes the Plutonium Man to overload and explode, just as the rest of the team teleports away thanks to Sideways, leaving only time for goodbyes.

“YOU’RE MORE THAN MY CREATIONS… YOU ARE MY FRIENDS.”

The second half of the book features the Metal Men forgiving Doc Magnus for his failings, even cleaning up the room where their destroyed previous corpses are stored.  They all take the time to say goodbye, even going out for a beer, and it’s better than the part of the book that ends the story. For one, the art is much more likable (and less garishly colored), and each Metal Man gets a little character beat, leaving only Doc and Tina to dance together.  It’s a sweet and meaningful moment and a nice ending (with a cameo from writer DiDio as the barman, asking Doc to lock the doors, as it’s time for him to go home) for a story that didn’t quite put together all the pieces to make the emotional beats feel entirely earned here.  Still, with everyone getting their own adventure and Doc and Tina finally ready to admit their mutual feelings, I like this ending.

All in all, Metal Men #12 gets enough right to balance on the things that I don’t like, with character developments that mostly work and art that mostly doesn’t balancing out against a heart-felt ending for a divisive creator (who, I have to stress, did NOT create these characters, no matter how much this series and the last few years at DC seem to imply differently) and ending up with 2.5 out of 5 stars overall.  It’s not a great issue, but it’s better than the last few, and sends this crew off with aplomb.  As last issues go, you could do worse.

It feels as much like a goodbye from Dan Didio as a final issue, and the team spreading to the four winds, while feeling unmotivated, does work thematically.