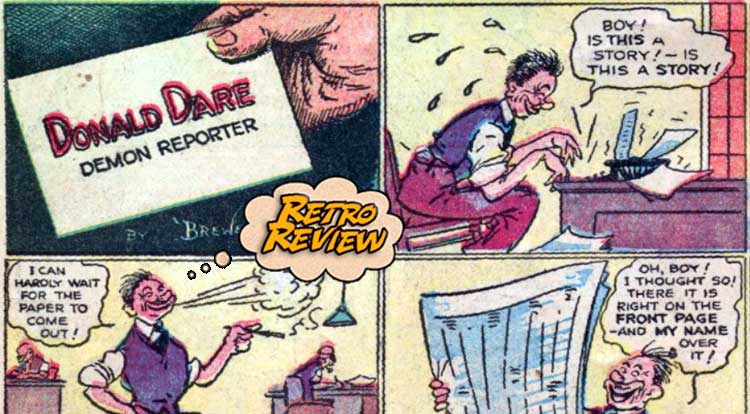 Every concept has to start somewhere, even the concept of “comic book.”  Your Major Spoilers (Retro) Review of Famous Funnies #1 awaits! Previously in Famous Funnies:  Though reprinted volumes of newspaper comic strips date back to (at least) 1890, the format that we think of as a comic book (the 7 3/4 by 10 1/2 inch folded paper pamphlet) actually didn’t make it’s appearance until 1933, and that as a free promotional item available from Proctor & Gamble.  The old story claims that East Color’s sales manager folded a newspaper into quarters and thus was the comic book born.  It wasn’t until the next year, though, that they actually distributed a funny book on the newsstands… and YOU ARE THERE. The very first newsstand comic in history, Famous Funnies is still heavily indebted to comic strips, consisting of all reprinted strip material.  I’m much less conversant in 1930s properties than I am in the history of comic books, meaning that the only title that I immediately recognize in this hundred page (!!) issue was ‘Mutt & Jeff’, who are like Rosencrantz & Guildenstern.  They’re a couple of horse-racing aficionados who cycle through various get-rich-quick schemes.  ‘Mutt & Jeff’ are sometimes credited with pioneering the daily comic strip format, though opinions vary, but one thing is clear from these pages: Shrinking them down for reprinting makes them nigh-impossible to read.  There are also reprints of ‘LIttle Stanley’ and ‘The Toonerville Folks’, known for their eponymous trolley. There’s something fascinating about the contents of this issue, including as it does puzzle pages, hidden-image games and pages designed for coloring in.  There’s even sorta/kinda paper dolls to cut out and fold, making it even more remarkable that an issue has survived intact.  I mean, this is basically junk paper and its nearly 90 years old at this point.  It’s not all funny titles, either, as in between episodes of ‘S’Matter Pop?’ and ‘Nipper’, we get some crime strips, a little damsel-in-distress with ‘Connie’ and the adventures of Tailspin Tommy. Tommy’s strip even comes with a little bit of aviation history in the pages, explaining historical flying machines, with detailed drawings, followed by the evocatively named ‘Donald Dare, Demon Reporter!’  That one’s a sort of slapstick workplace comedy, the kind of thing you might get from a Laurel & Hardy film.  There’s also a little Hollywood Gossip, mixed with a touch of ‘Ripley’s Believe It Or Not!’, in the form of Screen Oddities. These sort of features make it clear that comic books were aimed at general audiences, not just for children, even at the very beginning.  There’s even reader submissions, likewise reprinted from the newspapers, but showing some truly charming drawing of countries from around the world. In short, this magazine was designed to be read and enjoyed the same way as ‘Hit Parade’ or one of the adventure pulps, with content for all ages, laughs and even a little bit of schooling.  You’re  likely not gonna find Famous Funnies #1 in a quarter bin or the back of a used bookstore, but it’s a fascinating chunk of history nonetheless, earning a nigh-priceless and uncategorizable 5 out of 5 stars overall.  The real upshot of it all is that, without this package from Eastern Color, there might be no Batman, no Walking Dead, no CW TV and no Marvel Cinematic Universe.

Perhaps one of the most important comics of all time, it's entertaining and disposable, which makes it all that much more perfect. It's a piece of living history, on slowly decaying newsprint.