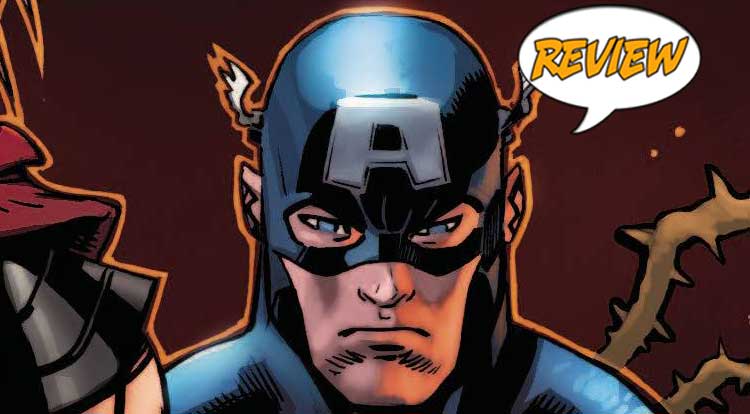 Previously in Avengers: The Avengers have saved Earth from the god of the Moon, but the return of a certain planet-burning cosmic firebird isn’t going to give them much time to catch their breath. Plus: The devil may be dead, but the threat of Mephisto lingers on, with a legacy interwoven in heretofore untold chapters of Earth’s Mightiest Heroes.

In the wake of Khonshu’s defeat, The Avengers have much to consider. But first, we flash back to the days of the Old West, as a man named Winthrop makes a deal for his survival on the trail to the new West. In the present, The Black Panther confronts Moon Knight, who insists that his methods were the only answer to defeating the Mephisto. T’Challa offers him a place on the Avengers team, working together to stop the cosmic entity. Ever the headstrong jerk, Moon Knight disagrees, vowing to punch the devil into submission with his own fists. Elsewhere, Blade and Thor observe The Phoenix, who seems to be building a nest (which is bad), Iron Man tries to unravel the mystery of the multiversal Mephistos (which is worse) and we continue to check up on the Winthrop family in their new satanic success. There are some truly horrifying demands made of the family, and a few important reveals (Mephisto pointed Thanos at planet Earth, convinced The Hulk to turn on The Avengers and will apparently continue manipulating well into the future), ending with the reveal of Mephisto’s head lackey… one Howard Stark.

One thing that I didn’t expect was all the creepy, crawly, body horror moments that this issue delivers, thanks to Mephisto. I was truly disturbed, even though most of the carnage happened off-panel. Mephisto as a centipede, crawling on a human skull as he whispered in the ear of Apocalypse was a surprisingly effective moment of horror, and the use of Howard Stark as demonic revenant was appropriately shocking. Aaron expertly weaves the various plot-lines around the growing Avengers team, using unusual pairings like Thor and Blade or Iron Fist and Doctor Strange to great effect, even adding some unexpected bits of continuity to Mephisto’s centuries-long plan. Once again, this run convinces me that the Stone Age Avengers (a concept I was very much cold on at first) are not only a natural bit of retroactive continuity, but an impressively fertile concept rather than just stitching together a bunch of divergent plot points.

As Mephisto’s plan takes center stage, Avengers #38 becomes an unexpected horror book, and while this issue is mostly various conversations and machinations, it doesn’t feel dull or talky, and McGuinness brings every page to life beautifully, leaving this issue with a well-deserved 4 out of 5 stars overall. I’m really enjoying how this volume has kept a cosmic scope while never neglecting the character interactions and interpersonal drama, and I’m kind of looking forward to Tony Stark meeting his undead father. That’ll be interesting.

For a mainstream superhero book, Aaron manages to work in a LOT of horror imagery and McGuinness delivers wonderfully dynamic art, even though this issue is mostly a breather between massive crises.