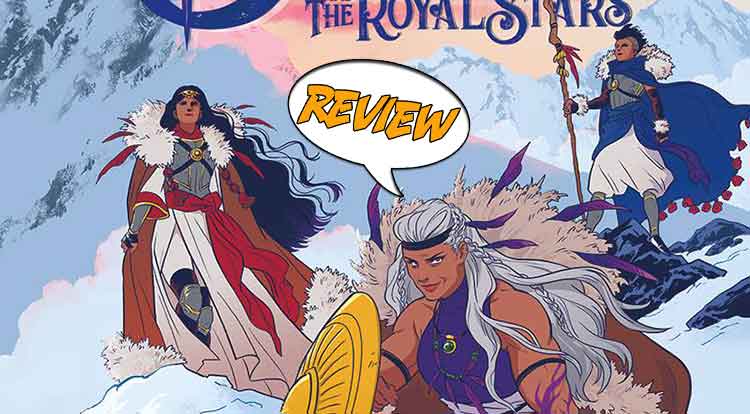 Sera and the Royal Stars #8 Review

Back on her quest, Sera doesn’t know that Roya has escaped with their mother and they’ve met up with another remarkable woman from the family. Find out more in Sera and the Royal Stars #8 from Vault Comics! SERA AND THE ROYAL STARS #8

Previously in Sera and the Royal Stars: Sera rescued her father and sister, only to lose them both as her father is killed and Roya is taken by the twin stars of Draco. Roya is thrown into a cell and discovers that her mother is still alive and is also a prisoner. Sera is feeling lost and alone until Antares puts things into perspective for her. Aldeberan and Fomalhaut are almost killed by Rastaban and Eltanin but manage to summon the Demon Star Algol. She tells them her story – and of the consequences of killing a star. But if all the stars perish, what will happen to the humans? She gives them the sword Light’s End, again warning them of its dangers.

ANOTHER STEP ALONG A GRAND JOURNEY

Sera and the Royal Stars #8 opens with Antares training Sera. She does not have control over the power she has from having a piece of star inside of her. Sera begins to wonder if her trip back to Setareh to rescue her family has messed everything up.

At the fortress where Roya and Tara are being held captive, two of the guards spot a small white bird that seems out of place (and which we saw briefly last issue). As they look at it, someone comes up from behind them and sets off some explosives. At this, the guards run off to kill the prisoners, as commanded. But when they open the cell door, Roya is ready for them, attacks, steals their swords, and kills them. She and her mother quickly leave and find themselves face to face with the woman with the explosives. This is Tara’s aunt Leilyn. She is white-haired and old, but strong and tough.

We soon find out that she has had an important part to play. The Tree of All Seeds has been poisoned, and she is the only one keeping it alive right now, at some cost to her. But to bring Tara and Roya to the tree, they need an offering. They head into the lair of Zahnak, the Serpent King where they must take one of his snakes. It really hits Roya that all this mythology she had heard of is not only true, but the women of her family are destined to be a significant part of it.

In a similar vein, Antares tells Sera about her family. Sera’s mother left before she had time to tell the girls much. The daughters of Parsa are protectors of the land. The story switches back to Leilyn. She was told to protect the Tree. Tara was supposed to summon the Royal Stars. Tara failed because Eltanin and Rastaban had trapped them all by magic.

Roya confronts the Serpent King and manages to lop off one of his snakes. Leilyn tells Tara to put the snake’s blood on her shield. This takes them to High Hara and the Tree. By coming back with them, Leilyn has unsealed the passages leading to the tree. If the tree were healed, it could then reseed the world. But the Stars still must be freed.

A REMARKABLE WORLD AND CHARACTERS

The art of Sera and the Royal Stars #8 is vibrant. The world is breathtaking in its beauty, and we cover a lot of it from the subtly-colored desert to the snows of high mountain ranges. This is an epic world, a world where we can believe that the stars appear on Earth in a human-like form and that magic exists. And then, to top it off, the lighting is incredible. It isn’t always mid-day. We see the color shifts of dawn and dusk. When it’s late and there’s firelight, everything has a warm glow. These little details help give the world a vivid sense of life.

The characters are marvelous, and so many of them are women, which is delightful. When we see Leilyn, she looks like a barbarian warrior. She has her shield and some armor and she wears a long cloak edged in purple tassels and with a white furry collar that matches her white hair. She is well-muscled and looks like she has been around and adventuring for decades. Equally distinctive is the Serpent King. We see him only briefly, but he makes an impression. We see his shadow first, a human form with some snakes, and it is the snakes we see first when he attacks Roya. Finally we see him, clad in red and with red snakes to match, some coiled around him so they almost appear to be a physical part of him.

BOTTOM LINE: I’M SO GLAD THIS BOOK IS  BACK

Sera and the Royal Stars #8 is an immersive book which is a joy to read. The mythology is rich and it is wonderfully brought to life.

Sera and the Royal Stars #8

Sera must free the Royal Stars, but unbeknownst to her, she may soon be getting help from more family members than she bargained for!