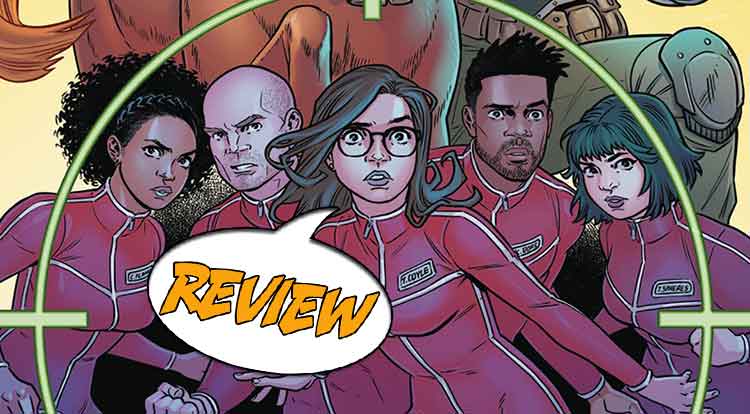 In MONEY SHOT #8, the XXX-plorers and POTUS Luke Kirk venture to the pleasure planet Cockaigne in search of the Positronic Battery that will secure their safety.  But with Doctor Teozol and Councilor Bode hot on their tale, will they be able to get hot and heavy and find the batter?  Find out in your next mighty Major Spoilers review!

MONEY SHOT #8 draws a great deal of its humor from the current state of American politics.  Opening with an interview with a pair of die hard POTUS Luke Kirk supporters (you don’t have to even squint to see that they’re a straight riff on Trump supporters) who, when confronted with evidence their President is getting down with the aliens, go from quoting Leviticus, to damning the Bible and advocating sex with aliens.  Yeah, it’s that sort of book.

A lot of the humor, while making you smile, does tend to feel heavy handed.  Yes, the President of the United States is a buffoon, yes, his followers act more like members of a cult than level headed citizens of a Republic.  There are probably better venues to ventilate all those feelings.  Yet, for all that, MONEY SHOT #8 is a fun and funny book, a bright and breezy satire about human interactions with each other, and the aliens populating the galaxy.

For those of you looking for lots and lots of sex, there’s a lot of talk about it, but previous few examples of it.  Kirk will take and give to anyone who wanders within touching distance, while the scientists are little better.  In a sense, MONEY SHOT #8 is more about the idea of limitless sex with whoever and whatever the characters want to bump uglies with.  It does leave one with a slight sense of frustration, however.

Regardless, MONEY SHOT #8 is an entertaining jolt of comic entertainment.  The plot unfurls smoothly, and the main characters are carefully drawn.  The best thing from the writing is that no one has any hang ups about sex.  Humanity seems (except for the Bible thumpers) to have moved on from whatever concerns they may have had about free love, and are clearly happy to enjoy sex whenever and however they can get it.  It reflects the more liberal elements of American society, where you are free to be whoever you are, with whoever you want, guilt free.  It’s a refreshing take and helps distract from the real world reactions to the changes we are seeing in our culture today.

Of special note is Rebekah Isaacs’s art.  Amongst the humans, there’s a nice variety of body shapes, with each character confident in themselves.  Even Luke Kirk, for all his preening, is no prude, happy to spread the message of intergalactic love, three minutes at a time.  The art is clean and dynamic, with Isaacs portraying the scale and majesty of alien worlds with an incisive eye.  She also knows how to compose a sex scene, bringing out the raw sensation of pleasure in but a single image.

Like my review of SEX CRIMINALS, SEXUAL GARY #1, MONEY SHOT #8 is a fun and entertaining frolic through the sexual adventures of a group of libertines bent on galactic sex.  It takes the time to insert some topical commentary about the current political moment in American politics, before burrowing deep into the fun side of exploring what the rest of the galaxy has to offer.

MONEY SHOT #8 mixes sex with social commentary in a fun way, getting the message in before moving on to more palatable fare. While there might be a lot of talk about sex, and too little of its actuality, MONEY SHOT #8 more than entertains in other ways. If you’re looking for a book that talks frankly about sex, how fun it can be, and mixing in a little adventure on the side, then MONEY SHOT #8 is the one for you!