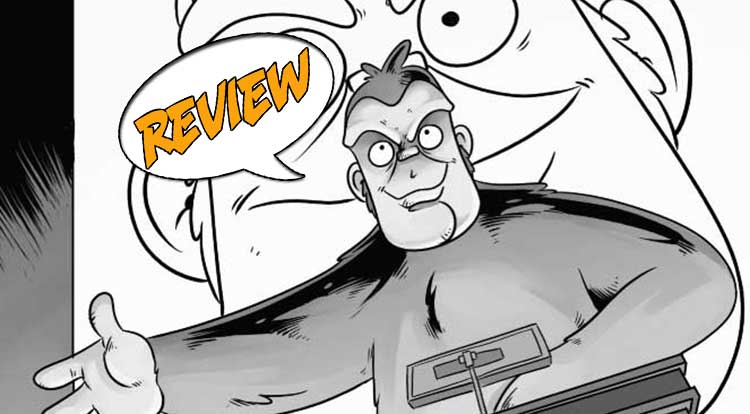 Grace doesn’t realize Holden wrote her the poem – and now her ex wants her back.  What’s a Sasquatch to do? Find out in Sasquatch in Love #3 from Action Lab Entertainment. Previously in Sasquatch in Love: Holden Jones is an avid reader and a reclusive poet – and a Sasquatch. He falls in love with Dr. Vogel’s videographer (Grace) and sabotages their van so they can’t leave town. Then Sheriff Judy tracks him down for the van, and now someone else knows his secret. To top it off, that very morning, another real Sasquatch shows up at his doorstep and runs of. Holden and Felix track the new Sasquatch, who is female and who kidnaps Holden. Felix calls Judy for help and then tries to rescue him, but Judy rescues them both. Judy and Felix head for the Waffle Festival, and Holden decides just to watch it from a distance…at first.

A SASQUATCH FULL OF JEALOUSY

Sasquatch in Love #3 opens at the Waffle Festival right after Holden comes out as the winner of the poetry contest and introduces himself publicly. Felix then introduces him to Grace and Dr. Vogel, who faints, and then there is a montage of Holden adjusting to life in Cooper’s Pines, and the town adjusting to him. The truth is he still doesn’t fit in. He has his own library card, but he is still lonely. Dr. Vogel’s questions don’t help much either. Holden gets a crash course in talking to women as he gets off on the wrong foot with Grace, and then commiserates with Judy. Meanwhile, they introduce Dr. Vogel to the female Sasquatch.

Felix and Grace drive back to town, arguing about music, when a driver cuts around them. The incensed Felix wonders aloud what kind of jerk drives like that, and Grace says, “The kind of jerk I used to date.” As it so happens, literally. The driver is Dylan, the jerk Grace used to date. He’s become some sort of social media influencer and obsessively takes selfies. He sends Felix off so he can talk to Grace. He has come out here because he wants Grace back – because his followers miss her. He then drives her home – and Holden sees him.

I love how this is turning into a ridiculous soap opera. And more is yet to come. Felix arrives home to find his ex (Andrea) has broken in. She has figured out how much money she spent on him when they were together and wants two thousand dollars. Or to get back together with him. He almost falls for it, but he turns her down.

Holden sets up a scare for Dylan. Because of this, he’s late to the town meeting with Sheriff Judy – the citizens have complaints against Holden (you know, the trivial kind like he smells funny when he’s wet, or they don’t like his poetry). As Judy talks to them about acceptance, Dylan bursts in demanding that she go after the Sasquatch. This is all it takes for the townspeople to band together; they may not quite like Holden yet, but he’s THEIR Sasquatch.

There are more hijinks to be had as Dylan and Andrea meet, and Andrea finds out that Felix did not, in fact, write the poem to her.

It’s the characters who bring so much life into Sasquatch in Love #3. Holden is sweetly awkward, not to mention extremely patient considering all the new problems he’s dealing with. But I really like how over-the-top both Dylan and Andrea are. Part of this, of course, is to really show that they were bad exes in their own ways. But there are little veins of truth behind the exaggerations, which make it a pleasure to dislike his arrogance, his selfies, his perfectly ironic eyebrow, and his fancy car.

Andrea is blonde and angry when we meet her and she throws a remote at Felix. She’s broken into his house, but he startled her by coming home. So of course she’s right. Now he’s been stalking her online for the past couple issues, hating her but wanting her back, and here she is. She knows she can manipulate him, but now he suddenly realizes all of this.

But it’s when Dylan and Andrea meet where the humor comes on at a hundred percent. It turns out they’re both social media obsessed.

I like how Sasquatch in Love #3 continues to weave some serious thoughts about acceptance in a story full of amusingly superficial characters. Humor can show us our foibles and remind us that we can step away from them. This is a sweet and goofy book.

Holden the Sasquatch – he may be a monster, but he’s our monster, say the folks of Cooper’s Pines.