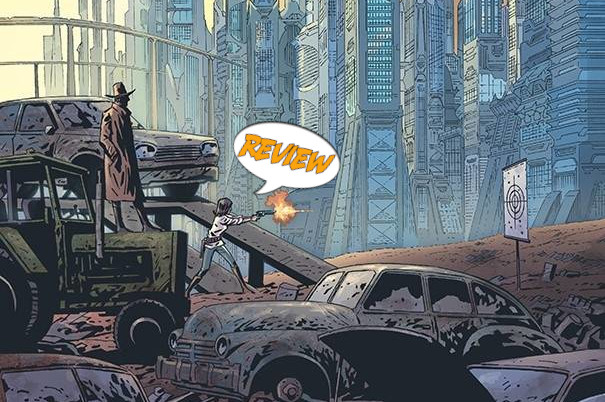 Sometimes your perfect utopia isn’t everything you want it to be. Clem has sworn revenge on the megacities but she doesn’t have the skills to defeat them! Find out if she survives in JOIN THE FUTURE #3 by Aftershock Comics! Previously in Join the Future: The future is now! Join these megacities that provide the ultimate comfort for you and your loved ones. A city that saps away your identity and becomes mindless people going about their daily routine. However when the megacities leaves to recruit more people, they murder those who reject their way of life. Clementine Libbey saw her father and brother killed by the city police and the rest of her town sell out to join them. However, she found a Trader that should be able to help Clem get her revenge.

Clem has woken up after being saved by the Trader. She pleads with him to train her how to shoot. He declines. However, Clem changes his mind by offering him a good home cooked meal which is a rare luxury. Clementine is a terrible shot but is unwilling to use anything besides an old school six-shooter in her mission to avenge her family. However, the Trader convinces her to compromise her morals and use a gun that can assist her aim and she storms off to murder a Sheriff.

During the encounter, she is unable to shoot her gun correctly and is immediately blasted nonlethally. The Trader comes in to save her but ultimately sells her off to the Sheriff to be taken to the megacity. Sometimes it is better to be alive and trapped then dead.

Clem is motivated by revenge. Even though she is young she sets out to be a murderer. This is difficult for me to read because of her age. I don’t want a kid killing people and I was very relieved when she couldn’t use the gun properly. Trader sells her off because he doesn’t want to see her die. He is convinced that the best thing for her is to be alive rather than start a war she can’t win.. The issue is that he lives a double standard. He is allowed to roam the cities but she must submit because she will get herself killed. This is an interesting power dynamic and plays a cool twist on mentor and mentee tropes.

I like these themes. I constantly wonder about how far Clem is willing to go to get her revenge. If she can get her revenge, how will she recover from murder? Clemintine is a character you root for but you want to hold her back from danger. If she goes too far, how will you bring her back to a life of normalcy? Whatever normalcy is for this book.

The book is well drawn and I appreciate the attention to detail. I enjoyed the shading on the clothes and I feel like you can see every single fold and wrinkle. This attention to details adds a huge amount of depth to the story and complements the powerful dialogue. I applaud the creative team on this book.

I can feel the drive of Clemintine and how far she is willing to go and I can see the motivations of the Trader. I am intensely curious to see how the story draws to a conclusion. The comic isn’t perfect but this issue was extremely strong. I want to know what happens next and how Clem will resist being taken to the mind sucking mega city. The dialogue and art really grips your attention and sucks you into the story! 4.5 out of 5 stars for Join the Future #3.

This is a story about a young girl who has lost everything and is trying to regain a semblance of control. How far will she go and will her actions turn her into a monster?
AfterShock Comics Brad Simpson Hassan Otsmane-Elhaou Join the Future Mike Marts piotr kowalski Review Zack Kaplan
Share. Twitter Facebook Pinterest LinkedIn Tumblr Email
Previous ArticleBitter Root #9 Review
Next Article [Preview] Titans: Titans Together #3