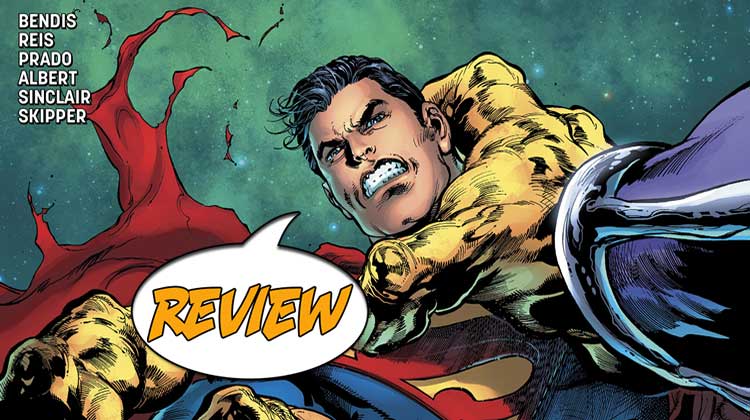 Brian Bendis is challenging the Man of Steel… something that hero has needed for a long time now! Find out in this Major Spoilers review of Superman #20 from DC Comics. SOLICITATION: The United Planets is a perfect, beautiful idea…that completely flies in the face of everything the barbaric Mongul has been fighting for his entire life. Mongol will destroy the United Planets and Superman with it. And he said something about using Earth as his toilet. Which doesn’t sound very nice. The return of one of Superman’s biggest and baddest villains…bigger and badder than ever!

SUPERMAN AND LOIS UNDER FIRE!

How do you make Superman an interesting character? It’s a question that has given fits to some of the best comics writers around. But I think Mr. Bendis has figured the Man of Steel out. How do you make this book a great read? You challenge him on every level you can!

We’re in the middle of a long-term storyline, and one of the important elements is the revealing of Superman’s secret identity. That’s the one part of this title that I KNOW is going to be reversed. Somehow, some way… Clark Kent WILL become a secret identity again. It’s just a vital part of him, and I don’t think that will remain changed forever.

The rest of the book shows Superman fighting Mongul, one of the great Supes’ villains because he can challenge (there’s that word again) the hero physically. Mongul has been a terrific addition to the Superman rogue’s gallery over the years, including when Alan Moore scripted “For the Man Who Has Everything.” That’s one of the very best Superman stories ever! If you haven’t read it, get it after you read this review!

The first fight between the two characters is putting the formation of the United Planets in jeopardy. The last thing Mongul wants is an organized resistance, so he’s there to keep that from happening. It’s very much a villain thing to do that! We know it will exist in the future, but in the present, it’s not a sure thing.

There are other storylines taking place at the same time, with Lois’ dealing with the reality of everyone knowing you’re Mrs. Superman. There’s a great surprise on the last page, something Lois should have expected would happen.

Another famous supporting character for the Man of Steel also shows up, but that would be telling! And the cast of aliens, always good in a Superman story, are there to moan and complain… except for the Tamaraneans. They’re the active participants in anything they do… just ask Starfire!

A lot of the pacing is rapid-fire, moving as fast as possible except when there’s the need for new information. That didn’t bother me, though, as I need we needed to understand more of what’s happening. And Bendis’ characterization is also strong, helping us know what people around the Man of Steel are thinking and feeling.

I felt the action sequences were particularly strong in this issue, which is just what you need in a Superman book. I mean, I winced when Superman gets punched as much as I cheered when Mongul took it on the chin. Very well done!

The facial expressions were also great! Many times we need them to help us know what each person is thinking and feeling, so that helped propel the story along well.

This book is one of the best DC comics being produced these days! It literally flies by when I’m reading it, pun intended. I was worried about how Bendis would handle the character, but he’s greatly exceeded my expectations!

One of the things this title accomplishes well is making us feel for the Man of Steel. I mean, he’s truly up against it! This is all happening against the backdrop of Clark trying to make a dream come true with the formation of the United Planets. Mongul makes the new leaders worry that Superman has made his enemies theirs as well, and that doesn’t sit well with some of them.

While I know that Clark Kent will at some point return to being a secret identity again, the formation of the United Planets is truly up in the air. Also, Lois is put on the spot when she becomes the news herself, something journalists truly hate when it happens. So everyone is engaged on the deepest levels, which is truly compelling.

I like what’s happening, and I hope Mr. Bendis continues to script Superman for a long time to come. He’s boosted this comic way, way up there on many levels, so I highly recommend this title. You might want to get previous issues, though, just so you know all the ins-and-outs of the current storyline. Really!

Brian Bendis is challenging the Man of Steel… something that hero has needed for a long time now!