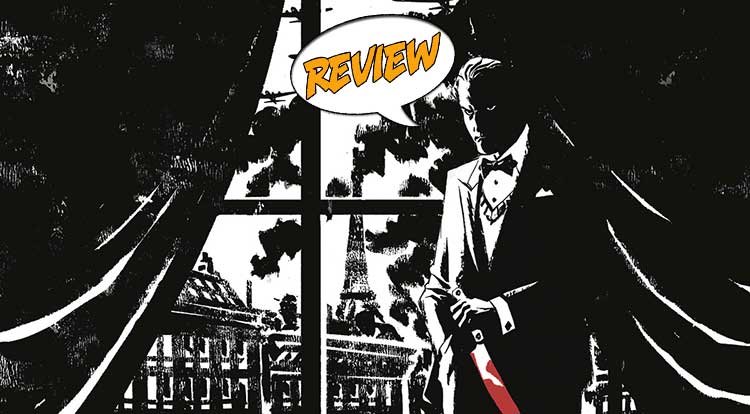 The Butcher of Paris #3 Review

Paris, 1944, and suspected serial killer Marcel Petiot is on the loose. Can the police track him down? Will the Nazis find him? Is he a member of the Resistance? Find out in The Butcher of Paris #3 from Dark Horse Comics! THE BUTCHER OF PARIS #3

Previously in The Butcher of Paris: During the Nazi occupation of WWII, the police search the house of Doctor Petiot and discover, to their horror, a large number of dismembered bodies. On the other hand, Petiot is suspected by the Nazis to be part of the Resistance, helping people escape from Paris. The civilian authorities are not happy about the Nazis, and they aren’t exactly working together.

CHAOS IN A DARK TIME

The Butcher of Paris #3 is the next installment of a fascinating, if horrific, treatment of the story of an actual serial killer. It opens in the trenches of WWI. This probably does not explain the killer, but it shows some of the evidence for his being…unusual. He sits calmly in the trench, reading, amidst the dead bodies and visiting rats. Not only that, but the book he is reading belongs to someone else. But this is war, and the law of the jungle applies, Marcel explains, just prior to setting off a grenade. The injury gets him out of the trenches and into a psychiatric ward.

In 1944 the police continue to investigate Dr. Petiot and discover his history of cruelty to animals, bringing a gun to school when he was a kid, rumors about his selling narcotics to his patients. He also has some staunch friends who deny that any of these rumors could be true. The press have a field day when his wife Georgette is brought to the station. As the Nazi officer there interrogates her, the civilian detective and his son have an interesting conversation about the many ways wives of criminals react to being questioned. What kind of woman is Georgette? Will she defend Marcel? Will she refuse to answer? And then the detective finds out the Director Jodkum is already interrogating the woman.

Georgette is shaken up, worried about her son, but says they have made a terrible mistake about her husband. She knows he owns the house where the bodies were found, but she has only been there once. And this is where more of his supposed past comes out – billing errors, narcotics, committing fraud when he was mayor of a town. But she claims he was loved by his patients and was kind, and none of this was true. That’s the thing about reasonably successful serial killers – they can hide in plain sight by seeming like the last person anyone would suspect.

Then it’s off to a fancy dinner party among the Nazi elite. The Allies are drawing closer, and the orders are to destroy Paris. Paris has been around for hundreds of years. It is known as the City of Light. It is an enduring symbol of the French Revolution. It would be intolerable to let it stand, but the current General has difficulty bringing himself to give the orders.

Detective Victor-Massu discuss Georgette as they get ready to head home for dinner. Just before they reach the door, someone drops off a note signed by the elusive killer they’ve been tracking!

The art style of The Butcher of Paris #3 fits the subject matter well. The inking is strong and energetic. Some of the details are presented as an impression of the background, enough that we get a sense of place, but not so much that it would distract from the story. This is a story all about the characters – and the hunt for Marcel Petiot, charming, wily, and arrogant. The horrors of war are presented without being too specifically graphic, but the focus is not meant to be the death; it’s all about Petiot, and we see him go from incongruously calm and at ease, to wide-eyed and mad-looking when he pulls the grenade pin.

In the police station there’s a lot of emotion which is enhanced with some fairly broad ink strokes. Deep shadows on people, I think, give everything a bit of a noir look which, considering the subject matter, is a good fit.

The Butcher of Paris #3 is an interesting case study for the true crime afficianado. The horror aspect is not that of a thriller, but solidly based on police procedural, albeit complicated by the politics of war.

The Butcher of Paris #3

Marcel Petiot is the chief subject, but his wife remains adamant that he is innocent, and a kind man to boot.