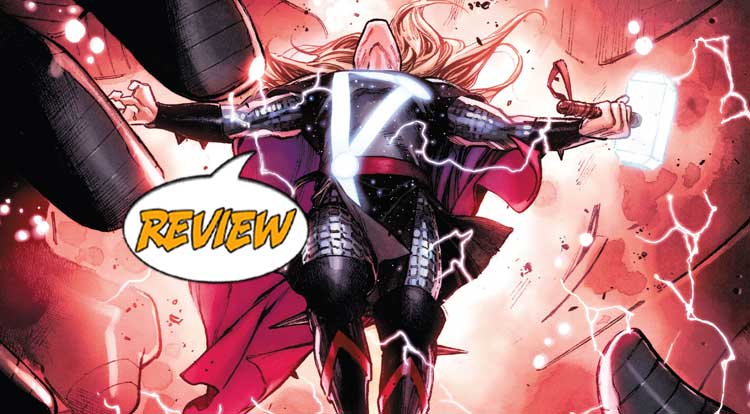 The King of Asgard is now the Herald of Galactus.  This bodes ill…  Your Major Spoilers review of Thor #2 from Marvel Comics awaits! Previously in Thor:  Before him lies the Black Winter; behind, a trail of death wrought by his own hand.  The God of Thunder hurtles through the cosmos, searching for the power to save Asgard and all existence.  But no power in the heavens can save a god – a king – from his bloody duty.

WHEN THE END COMES

We begin in an alternate universe (heavily implied to be that of DC comics, including a familiar red-and-blue blur, an emerald energy trail and bolts of lightning) as it is destroyed by the Black Winter, which appears as a giant ebon hand crushing the entire galaxy in its fingers.  Back in the prime Marvel Universe, Thor has led Galactus to planet Clypse, the first of five worlds that the Silver Surfer always kept hidden from his master due to the sheer amount of power they would possess.  Before the World-Devourer can destroy it, though, Thor insists that he be allowed to save the population, leading to a battle between the God of Hunger and the God of Thunder, one which almost tilts in Thor’s favor.  Thanks to an assist from Asgard and the arrival of the Rainbow Bridge, Thor evacuate the population before Galactus can eat them all, but is horrified when the Big G destroys the whole world, consuming every last erg of energy that he can.  Just as they prepare to move on to the next world, an attack comes from behind, blasting Galactus with heavy firepower and announcing the arrival of… Beta Ray Bill?

DID… DID THEY JUST KILL THE JUSTICE LEAGUE?

The opening sequence is actually quite nicely done, with subtle moments (like the globe of the Daily Planet) hinting at where we are without making it feel like a cheap shot at the distinguished competition.  Instead, it builds the stakes in a way that destroying, say, The Ultimate Universe, might not have.  This whole issue is about tension and conflict, and Cates’ script really shows the internal conflict of King-as-heral and the coming darkness very well, even in a book that has been about endless war in Asgard since about 2008.  I really enjoy the art, as well, with a redesigned Thor playing off classic Kirby Galactus, underlining his status as the eternal, universal force of destruction.  The amout of damage that he has taken in the last couple of issues is gruesomely shown as well, with Thor destroying his hand after last issue’s loss of his right arm, making things seem even more desperate.  With Thor possibly having to fight his brother-in-hammer, also sporting a cool Klein redesign, I’m very much wanting to see what happens in future issues.

It’s a tense issue, full of action and conflict, and it all works really well, avoiding Cates’ tendency to take things a step too far.  (See: Cosmic Ghost Rider.)  Thor #2 is an exciting issue that deepens the mystery of Thor’s increasing problems with his own powers, Galactus’ mission to save the universe and the problems of trying be both leader and follower, with excellent art and tension throughout, earning 4 out of 5 stars overall.  I’m hoping that this doesn’t end up being the years-long schmageggi that the last big Thor plot was, but so far, it’s keeping my interest and excitement high.

Something bad is coming, Thor can barely hold his hammer and Galactus himself is afraid. It's impressive storytelling and I'm liking it.