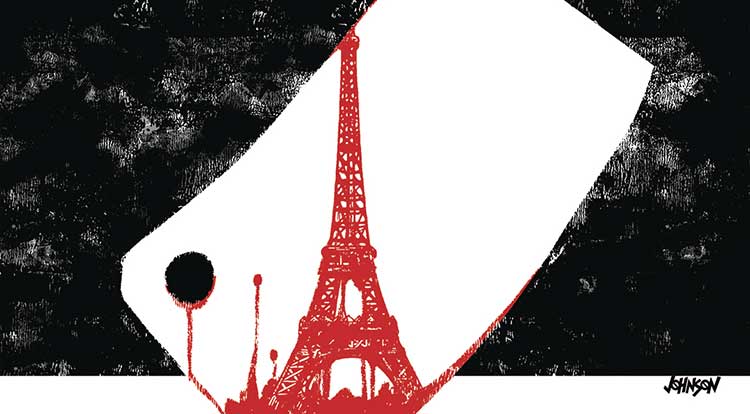 The Butcher of Paris #1 Review

All is dark in the City of Lights.  In 1944, Paris groans under German occupation.  Residents, especially French Jews, live in fear of a knock on the door in the dead of night.  But it isn’t only the Nazi occupiers the citizens have grown to fear.  For while the jackboots of Nazism stride the streets of Paris during the day, at night, a lone fiend has been killing and killing and killing.  Who is he and will he be caught?  Find out in our Major Spoilers review of The Butcher of Paris #1 from Dark Horse Comics. THE BUTCHER OF PARIS #1

Previously in The Butcher of Paris: The Fall of France in 1940 shocked the world.  Extensive defensive preparations to defend the nation against an anticipated German attack during the 1930s came to naught as the famous Nazi blitzkrieg overwhelmed a divided nation.  Split in two, Vichy France to the south lay prostrate, ruled by traitors.  In the north, the rest of France was absorbed into Hitler’s growing empire.  The ruled and their rulers get along in an uneasy peace, with German authorities having the final say.  When evidence of a serial killer emerges, battle lines are drawn in the streets of Paris.

My grandfather fought in World War 2 and became a German prisoner of war.  He suffered from what we now call PTSD, the result of his mistreatment at the hands of his wardens.  I’m of a generation that grew up during the Cold War, the frozen conflict which emerged from the ruins of Europe and the creation of two new superpowers.  German history, the rise and fall of Nazism, and the rise to power of men of little skill and less governing experience have long fascinated me.  I once had a friend who commented I had far more books about Hitler on my shelves than was perhaps healthy – but if you want to begin to understand evil and madness and the drive to destruction, you have to expose yourself to it.

The Butcher of Paris #1 looks at a slice of history during the war years, through the lens of a criminal investigation into the activities of a serial killer during the German occupation of Paris.  It gets away from the clichés of dozens of World War 2 movies by concentrating on a criminal case, without entirely losing the flavor of the brutality of Nazi rule.

Writer Stephanie Phillips confidently introduces the various elements of The Butcher of Paris #1 in this opening issue.  It is interesting that Phillips has chosen to portray the characters in shades of grey – while the Nazis are representatives of an evil empire, those we see here are little more than petty officers of a foul regime, chasing men down the street in the dead of night.  The monstrous killers of reputation are little more than grasping men keen to shore up their little empires of graft.

Similarly, some of the French are not shown as exemplars of light.  Doctor Peniot, who is helping Jews to escape France to Argentina, is an oily figure motivated more by greed than idealism…and perhaps something else?  His comment about the necklace of a woman trying to escape Paris being rather nice points more to him fattening his wallet than being motivated by higher ideals.  That said, if the price of saving lives is a little money, it’s possible not to be wholly disgusted by his attitude.

THE EVIL THAT MEN DO

In The Butcher of Paris #1, the German occupiers have grown complacent, content to inflict petty injustices on the French, while attempting to shut down an underground railroad allowing Jews to flee Paris.  We see early in the issue the capture of a Monsieur Dreyfus who is forced to become an agent of the Nazis, infiltrating the network funneling Jews out of Paris to save his own life.  His German captors, Hermann and Jodkum, never threaten him with physical violence to gain his agreement.  But the threat of being bundled onto a train to Germany, or more darkly, Poland, imply these men no exactly the true nature of the regime they serve.

Meanwhile, French detective Georges-Victor Massu and his son Bernard are drawn into a case that forms the beating heart of The Butcher of Paris #1.  After being warned off the Dreyfus case by Hermann and Jodkum, the father and son become aware of an incident that will link the serial killings to the Nazi hunt for the network helping Jews escape Paris.  An indescribable stench has caused a ruckus in their precinct.  Investigating the apartment building reveals a house of horrors the likes of which both Massu and Bernard have never seen before.  In the basement are found bloodied instruments, amputated limbs, furnaces full of bodies and skulls left lying about.

All of this is brought to vivid life by artist Dean Kotz.  The City of Lights lies shrouded in darkness, as the opening panels reveal.  The workaday lives of the citizens, their homes, clothing and surroundings, all stand in stark contrast to Nazi rule and the horrors found at the end of the issue.  Kotz’s individualistic line work depicts each character in stark contrast to the others.  The haughty Germans, the panicked, fearful Dreyfus, the measured Detective Massu all come to life under Kotz’s pen.    His work, with that of colorist Jason Wordie, complement the writing and setting to a great extent, depicting the mundane against the encroaching horrors very effectively.

The evil that men are capable of is starkly displayed in The Butcher of Paris #1.  The Nazis don’t have to hang their victims from butcher’s hooks with piano wire to still be monstrous fiends.  And while we would all like to think that the occupied are ready to rise up and overthrow their oppressors, the stark reality is that life under occupation is more a test of endurance, than a clash of principles.

The Butcher of Paris #1

An intriguing opening issue, The Butcher of Paris #1 presents a variety of plot threads that slowly begin to converge into a tapestry of multi-faceted characters motivated not by the best of humanity, but by the compromises made to survive an ordeal few can imagine.