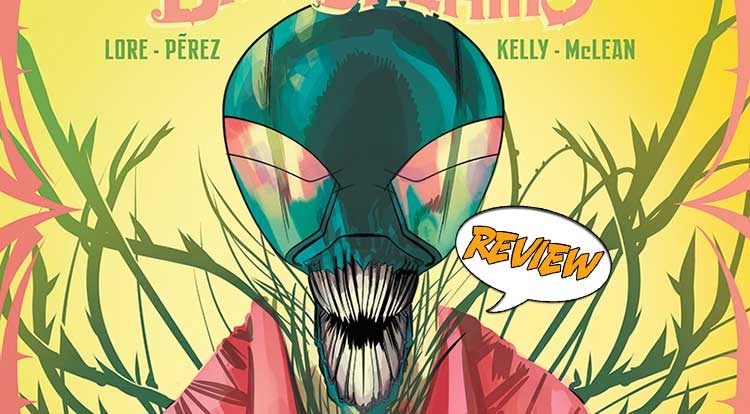 Ava has been pulled back into the Chases’ dreams, and Daher follows as well as Selene. What nightmares await them? Find out in Queen of Bad Dreams #5 from Vault Comics. Previously in Queen of Bad Dreams: As Daher is with the Chases, a group of masked thugs break in and attack Ava, Viv, and Selene. Actually, they’re only they’re for Ava and when they explain that, Viv recognizes one of them as the figment, Jordan who suddenly she changes into a strange monster. Daher gets taken off the case after slugging Emerson Chase, but West is put on it. They overhear the Chases, with Eleanor talking about how her figments are going to bring Ava back them. Jordan is one of Eleanor’s figments, and she is not free; she cannot refuse Eleanor. Selene tries to talk her into resisting. She tries but cannot. And so, to keep Selene safe, Ava gives herself up, just as Daher arrives.

Queen of Bad Dreams #5 opens with Ava with Emerson Chase on campaign, ready to meet with his mother who is in charge of his campaign. Ava refuses to go along, and Eleanor declares she has no choice. Ava insists it was her choice to come back, for the sake of Selene and Viv.

At Viv’s apartment, Daher kicks into work mode, apologizing to Viv, who stops her. Viv hates that Daher’s job kept her away from her family but seeing how Eleanor treated Jordan and how little Selene mattered to her, she has found her resolve. She is afraid she may never see Daher again, but she also knows that she may be the only person who can save Ava. Daher goes into Eleanor’s dream realm. And then Selene follows, just wanting to be with her.

Last time, West gave Daher some new, more powerful tech. She hasn’t had a chance to practice with it, but with Selene’s help, she gets it under control. Eleanor’s dream is stable enough to hold people in it, the sign of her being a powerful psychic. We see more of her dream as someone puts a helmet on her head (the same helmet Daher now wears) and talks of Project Somnia. When the Somnic Incident occurred, releasing figments, her family made sure she was empowered, and she took control of her dreams, and more. She has even created a dream version of her less-than-perfect son. Eleanor turns Emerson into a monster who attacks. Selene slides past him to get to Ava, but Eleanor intercepts her. She tells Selene she has no power here, but Selene has something Eleanor doesn’t even conceive of. She knows what it means to make a choice, and to have choices to make. She also knows that, whatever happens, she is not alone. She is able to reach through to Ava – and Ava wrests control of Eleanor’s dream. This is as satisfying as it is terrifying.

Back in the real world, all of this is hidden and secret. Emerson Chase is back and running for Council. Daher is becoming a private investigator. And what is to become of Eleanor Chase?

Much of Queen of Bad Dreams #5 takes place in Eleanor’s dream which is more bizarre than anything we’ve seen so far. Some parts of it are almost prosaic; others have a more random feel. But I appreciate that it pulls us in to show Eleanor’s role in the Somnic Incident – suddenly everything makes sense, which is a challenge in a world where dreams are a major component. At this point, all hell breaks loose, and the fight takes place against a background of swirls, colors, and textures with threads of political campaign imagery running through it.

Queen of Bad Dreams #5 wraps things up very tidily. I like their take on dreams and the concept of figments. This gives the book away to address some very real issues in a creative way. It’s a fascinating world and a good story with a great cast of characters.

Delving into the dreams of the powerful and ambitious.