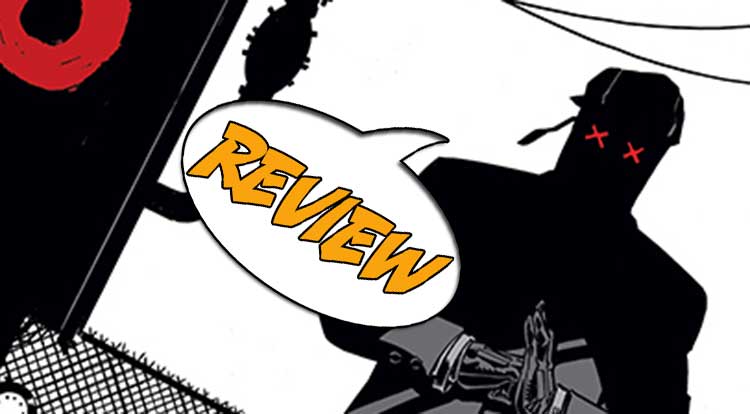 BETTER TO BURN OUT, THAN FADE AWAY

Superhero comics are populated with characters that never age – as the decades roll by, their wardrobe and topicality change, but essentially, they are always the same age, facing the same villains.  You might get the occasional character, like the Punisher, who is relentlessly a product of the Vietnam War, and is rising 70.  But usually, if you’re Batman, you’re always 35.  You get what I mean.  So, much of the fun to be had reading Dead Eyes #1 is witnessing our titular vigilante donning the mask once more, only to come up against the unrelenting effects of the passage of time.

With his ill-gotten gains spent, Martin has to return to work.  He says it’s so he can case the Wal-Mart style store, but realizes everyone plays by plastic, and there are no rivers of cash flowing through the business for him to steal.  We’re treated to one side of writer Gerry Duggan’s approach to Dead Eyes #1 – biting satire and humor.  We listen in on Martin’s internal monologue, as he compares his ‘meet and greet’ role to having died and gone to Hell (he’s not wrong – watch those people at the front of your K-Mart or Target, and you will see someone dying a little inside each time they say ‘hi.’)

It’s when Martin recognizes that a customer’s purchases add up to them disposing a body, that Dead Eyes #1 shifts from being (relatively) gentle fun and goes really, really dark.

Dead Eyes #1 is full of the bold storytelling and excellent art you’ve come to expect from Gerry Duggan and John McCrea.  Come for the violence, and stay for well-deserved punishment.
The tonal shift in Dead Eyes #1 isn’t as stark as I’ve portrayed it, but it is noticeable and understandable given the subject material.  Martin isn’t a bad person, not really.  He does bad things for what he regards as good reasons.  And as readers will see later in the issue, Martin doesn’t really have a choice in how he responds to what he discovers when he follows the customer home.  But be prepared for the writing to venture into some dark places.

One reason to read Dead Eyes #1 is the fine work by artist John McCrea and colorist Mike Spicer.  There’s starkness to McCrea’s art that fits in well with the story Duggan is telling.  Martin is portrayed as your average Joe, a working stiff struggling to put food on the table and ensure his ill wife gets the best care she can.  Seeing Martin hollering about his hemorrhoids in the bathroom is both funny and confronting, displaying the reality of a masked criminal’s existence in the real world.  Mike Spicer’s work comes to the fore in the latter pages, where Dead Eyes hunts down the customer at night.  Long shadows and threatening silhouettes abound, which add to the menace of the situation Dead Eyes finds himself.  And what he finds under the stairs will change his life and bring fresh attention to the return of Dead Eyes.

Dead Eyes #1 is a fine crime story with an interesting twist in that the main character has been retired for twenty years, but comes back for more, with consequences that are both personal and professional.  Martin is an appealing everyman who just wants to do the right thing by his wife, but his lies about his activities and the response at his return by the criminals he once ripped off threatens the safe life he has carved out for himself.

The passage and ravages of time is ably portrayed in Dead Eyes #1, with some fine art and at times amusing writing keeping the story flowing nicely towards a chilling conclusion. Dead Eyes #1 is a strong opening issue that holds the promise of more excellent storytelling to come.