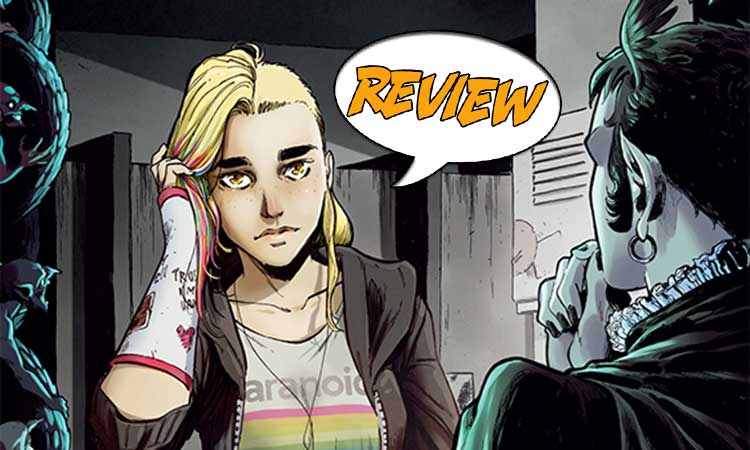 Rebecca Kumar is turning 21, but when a dangerous being comes collecting debts, it’s unclear if she’ll make it to 22. Your Major Spoilers review awaits! Previously in Nomen Omen: In 1995, Meera and Claire came across a car accident. The night unfolded in an unexpected way. 21 years later their daughter is trying to live the best she can, regardless of being afflicted with achromatopsia, a condition that makes it impossible for her to perceive anything other than black, white, and shades of grey.

FROM WEST COAST TO THE EAST COAST

Nomen Omen #1 starts in California circa 1995.  Claire and Meera are a couple leaving Yosemite National Park after a wild night drinking and skinny dipping.  As they drive, they discuss their future and the prospects of relocation on the horizon. Eventually they come across a car accident.  Oddly enough one of the drivers is missing completely, unfortunately that can’t be said for the other driver, who is dead in their car. They are then confronted by a woman emerging from the woods, covered in blood, speaking in riddles. They attempt to help the woman as best they can, but Meera, a doctor, knows that the prognosis is grim. Before she passes, the mysterious woman places a hand on Meera which sends her into a hallucination world of sex and demons. Flash forward to present day Manhattan, Claire and Meera receive a call informing them that their daughter Rebecca has been in an accident. They arrive at the hospital just as Rebecca awakes asking for someone named Nick. A couple weeks later it’s Rebecca’s 21st birthday have gathered to celebrate. They chit chat for awhile before Rebecca goes off to the bathroom where she is confronted by someone claiming that she owes them a debt, her heart. The confrontation does not go well for Rebecca.

A WHOLE LOT OF SET UP

With so much time spent on Rebecca’s parents, this issue doesn’t really feel like she is the main character as she’s been advertised as.  Nomen Omen #1 feels as if it could be a #0 type of issue.  That being said, this issue has me interested. Even though the story doesn’t feel completely original, there’s enough little differences that makes it feel fresh.  There’s a little awkwardness in the dialog at the beginning of the issue where two characters who apparently know each other feel the need to bring up details about each other that they’d probably know. After that though, the writing feels good and natural especially between the group of 20-somethings.

One of my favorite techniques in comics is black and white art with splashes of color.  But whereas the use of this technique is usually just a stylistic one, there is actually a story explanation here which makes the art feel like an integral part of the issue. Becky’s friends are a bit of a statistical anomaly, as they are all attractive, but are at least distinct from each other.

Various outside media have become increasingly included with comics (i.e. Spotify playlists, facebook accounts for characters). Normally, they don’t warrant mention but I think Nomen Omen’s Instagram account ( _Nomen.Omen_ )deserves mention since it is the topic of the majority of the dialog in the 2nd half of Nomen Omen #1.  The account seems to be made as if it’s from Rebecca herself and is actually quite extensive and considering the series just started. I was actually impressed by how much it looks like the sort of Instagram account that an artsy millennial would have. I’m unsure just how entwined it will be with the series proper, either way it’s worth a look.

Nomen Omen #1 is an issue that spends a bit too much time setting up the main character of Rebecca.  But, once she takes over as the focal point the issue becomes an enjoyable story about modern adults living their lives under the shadow of a supernatural presence. So far, everything about this series, from the art to its social media presence,  feels like a well crafted attempt to create a property that can be enjoyed multiple ways. 4 out of 5 Stars

Nomen Omen #1 does an excellent job keeping the reader engaged with the story by utilizing shifting perspectives, an inclusive story, usage of color, and the addition of other media formats.