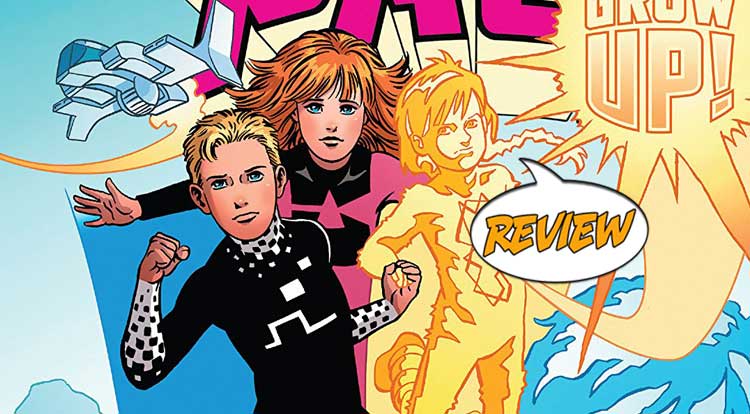 Previously in Power Pack:  Alex, Julie, Katie and Jack Power (four ordinary children granted incredible alien abilities) soared into our hearts with amazing adventures from the Morlocks’ sewers to the depths of space.  Now, when the Brood crash a Lila Cheney concert, Power Pack jumps into action.  But can they fight past their own anxieties – and each other – fast enough to drive off the invasion?

We pick up with Power Pack on the night before Alex Power’s 13th birthday (meaning that this issue is set in the past, as Alex is closer to 18 in his most recent appearances), as the four Power children prepare for his special birthday celebration: A Lila Cheney concert in Central Park! Alex worries that the weather will ruin things and sour his sorta date with Allison, the girl he has been crushing on since 1985, The actual ruination comes when Kofi Whitemane crashes the party in Smartship Friday, followed by two shipfuls of alien Brood. The Power Pack leaps into action, with a little help from Wolverine and Shadowcat of the X-Men, using their abilities to not only protect New York, but to avoid getting implanted with alien eggs. During the fight, the youngest member of the Pack, Energizer, loses her beloved Lila Cheney action figure, which leads to a moral dilemma about what gift to get her big brother for his birthday.

First off, June Brigman should have a monthly series, because she’s still got it. The art in this issue is fabulous, giving us kids who look like kids (without resorting to any chibi-style tricks or giving us adults who are just short), while making the alien Brood as terrifying as they have ever been. This issue has a lot of fun with its preteen protagonists, reminding me as a reader that crushes and questions of how to interact with your younger siblings can be as daunting as any superhero battle, and when Katie spends her allowance selfishly rather than get Alex the gift he wanted, it’s as serious as any Spider-Man life-and-death battle. The second half of the issue is drawn by the art team known as Gurihiru, and while its different than Brigman’s work, it’s also really adorable. (They did some of the 2000s Power Pack series, as well as Gwenpool and Unstoppable Wasp.) A Power Pack story requires a mastery of facial expressions, and both art teams deliver, with Alex’s worry, Katie’s guilt, Julie’s distress and Jack’s… just kind of being caustic little Jack.

BOTTOM LINE: THERE SHOULD BE MORE COMICS LIKE THIS

As a celebration of the Power Pack’s 35th anniversary and Marvel’s 80th, Power Pack: Grow Up #1 hits the mark nicely, calling back to the best of the 80s series with modern twists and making me want more Power Pack adventures, with two different but equally successful art styles in play, earning 4 out of 5 stars overall. As much as I love Alex with the Future Foundation and Julie off doing Julie things by herself, it’d be nice to have more adventures featuring all four Power kids again.

This is a book that reminds me how much I miss the original series.