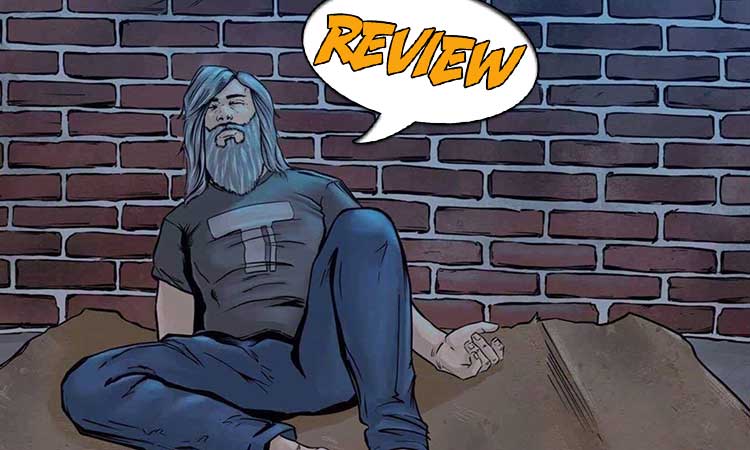 The man who can fly would like to tell you his story. What happens when a young teenager is discovered to have special powers and is taken in by a secret benefactor to help him train in the use of those powers? Probably not what you think, or maybe it is exactly what you think! Find out in Tilt #1 from Catalyst Comics Studio, coming July 17th. Previously in TILT: Part of the launch of a new independent comic publisher, Tilt tells the story of one of the Hyper-Evolved people who populate the world of Catalyst Comic Studio. Their first title, Paradigm, was released in May of 2019 and has been available on their website, Amazon, Comixology, and other digital sources.

THIS IS THE STORY OF A MAN WHO COULD FLY…

High above the city of Boston, we find Patrick Eitilt soaring in comfortable clothes. His long gray hair and burly beard flow in the air as he casually relaxes on the wing of a passing passenger plane, eats a sandwich, and addresses the reader directly. Yes, you see, Patrick Eitilt can see through the fourth wall, and he wants to share his story with you.

He wasn’t always the strapping man with the gray flowing locks and magnificent beard. Once he was an ordinary young boy. He lived an ordinary life, until at fourteen years of age it was discovered he could fly. His parents did not take it well, eventually contacting a man who could help their son. This man, known by the name Exquisite, delivered young Patrick to a group known as the Council of Elders. What came next was years of testing, experimentation, and conditioning. He was eventually made into a weapon, an enforcer who did as he was tolded. For years he was under their thumb, and committed the will of the Council until one day, he didn’t.

Fifteen years after coming to the care of the Council, Patrick had the opportunity to escape. Scarred by his time as the muscle for the Council of Elders and their unknowable plans, he took to the streets and became a force for good, helping the little people whenever he could. Having no contact with his family since the day he left, he made his base in an abandoned building, going by the nickname he was given in school, Tilt. Finally ready to confront his past, he goes to find the man who started him on the path his life took. He goes to confront Exquisite and is set on a path which will put him in opposition to he mysterious one time benefactors.

…BUT CAN HE STICK THE LANDING?

Tilt is the second comic to be released by Catalyst Comics Studio, based out of North Carolina. Writer Aaron Dowen (Paradigm) and Illustrator Joe Desantos (Pure, Silversteek) bring us Tilt as another hero in the Catalyst Comics Studio supers universe. The first, Paradigm, finished a successful Kickstarter in December of 2018 and is available now.

Aaron Dowen’s work here is interesting and he makes several daring creative choices when telling the story of Tilt. The first and I think most shaky choice is having his main character break the fourth wall and converse directly with the reader. While this has been a successful technique in the past several years in not only sequential works but in certain blockbuster movies, it often is used as a way to tell the reader that maybe the character addressing them does not have full use of their faculties. That may be the case for Tilt, as the character does not come off as the most stable. Dowen uses it as a way to introduce us to the character and his backstory, while setting up possible future conflict. I have to be honest; it is a little hit and miss in its deployment this issue. In some ways, it brings up more questions than we are given answers for, but in others it seems to add a slight level of quirk to the character of Tilt.

The artwork by Joe Desantos is good and adds another dimension to the story. There is a solid grasp of anatomy and some nicely designed panels that exhibit some good ideas of movement and storytelling.  I do wonder what sort of script is being worked off of, if it is a full script or plot first, but regardless there are some nice moments here. .

Starting a new publisher is a daunting task and gathering a team that fits is even more daunting. However, some problems which arise out of intense scrutiny. A few dialogue balloons seem to not match up with the character speaking them and some assumptions are made in storytelling that may have needed to be addressed more directly. Overall, it is entertaining, and making the character semi-homeless is an interesting trait which can be explored in future issues. Overall, I would say check it out if you want to support new creators and original voices and possibly get n on the ground floor of a god story.

TILT #1 is laying the groundwork for a unique story. It could possibly be a hidden diamond in the rough.

While not perfect, I think it is only a few steps away from the potential to be a wizard of a book.