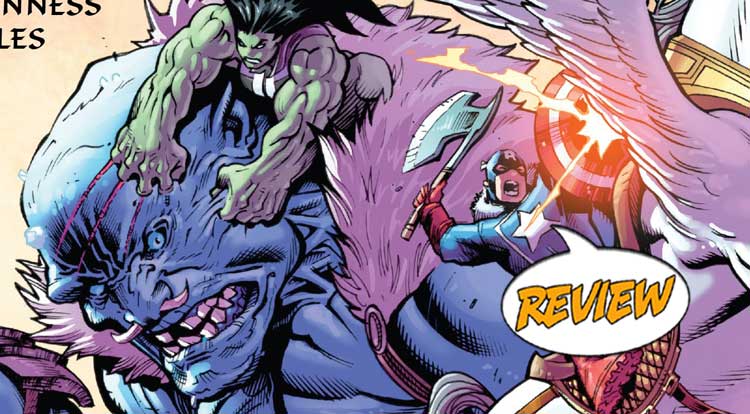 The War of Realms rages, and Jennifer Walters’ powers may be out of control.  But is that a bad thing?  Your Major Spoilers review of Avengers #20 awaits! Previously in Avengers: The final battle for Midgard!  Captain Marvel leads the War Avengers!  Hulk battles Ulik!  Blade takes on the Black Berserkers of Roxxon!  Plus: Daredevil the God Without Fear has a cryptic message that will decide the future of the team.

This issue opens with a somewhat confusing sequence where Jennifer “Hulk” Walters is on trial, with the prosecution being Jennifer “She-Hulk” Walters arguing in from of Judge Jennifer Walters.  It’s revealed to be a simulation created by the Black Panther to allow Jennifer to work on her issues.  Cut to the War of the Realms, as the Avengers attack Ulik’s troll compound in Australia.  She brings the trademark Hulk swift-and-blinding violence to the occasion, at the behest of Captain Marvel, who wants only to make sure she’s okay.  Jennifer’s rampage is targeted and successful, as she personally beats down Ulik (and coincidentally gets a marriage proposal from him in the doing.)  As she thinks about her new life, Jennifer actually admits that she’s happy to be a full-on angry, ugly, smashy Hulk, finally putting behind her the days of silliness and flightiness and paparazzi taking pictures of her butt.  Deadpool even arrives partway through the issue to ask her what happened, only to get the answer that she’s happier being free to be ugly.  As the issue ends, Jennifer arrives in New York to battle the Frost Giants who have taken over, ending with her slamming into them full-force, happy that things are about to get ugly.

A NEW TAKE ON SHE-HULK?

This issue really dives into the mindset of Hulk/She-Hulk (the naming convention is super confusing and I kind of wish Marvel would pick one), and it’s a fascinating look, discussing her frustration at cousin Bruce telling her that she had it easy as She-Hulk and the problems with being a big, beautiful green amazon woman.  It’s interesting to see a rampaging gamma-powered monster who is entirely happy with it, and I really appreciate how well Aaron encapsulates the woman inside the big green monster.  The art is quite solid, as well, with special kudos going to the moment where Jennifer is wearing a cape, crown and carrying a hammer to destroy the King of Trolls, but the whole issue looks really impressive.  (I really like the weird godlike Daredevil who guest-stars, and there are a couple of shots of Blade in action that are really smart and really lovely.)  Avengers is one of Marvel’s more-than-once-a-month books, which means that it can easily fall off your radar for several issues at a time in the space where you’d normally only miss one, so I feel a little lost about what’s going on with the bigger picture, but the focus on She-Hulk and her frustrations makes for a great solo spotlight.

In short, Avengers #20 looks good, reads well, uses the backdrop of the big crossover to amazing effect and deepens my understanding of Jennifer Walters as person, hero and monster, earning a well-deserved 4 out of 5 stars overall.  I’m going to have to go back and reread that last few issues to see how we got here, but even without that context, this issue works as a personal, effective and fascinating look into the mind of a hero and makes me miss “The Fun Hulk” a little bit less.

It's a spotlight for Jennifer Walters and a really effective character study that doesn't skimp on the fighty-fighty, once again making the crossover work to support the ongoing series. Some really good art doesn't hurt, either...