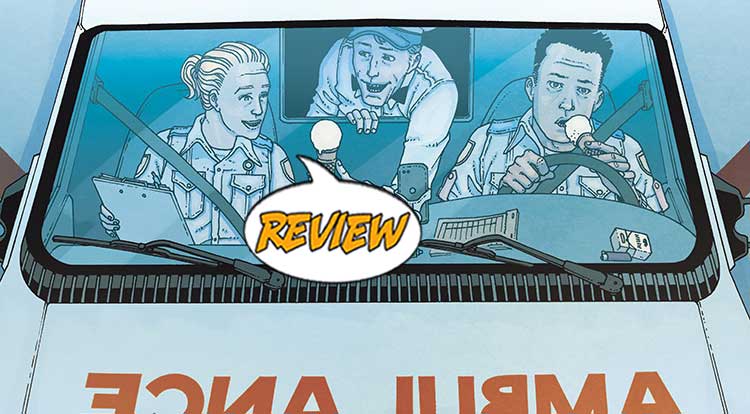 Craving tales of the uncanny with a candy-shell of pure evil?  We’ve got you covered.  Your Major Spoilers review of Ice Cream Man #8 awaits! Previously in Ice Cream Man: All around town, folks are in crisis. But this ambulance ain’t stoppin’ for no one, baby…

This issue opens with an unseen narrator (presumably Caleb the cowboy, who keeps recurring without ever being fully explained) explaining about that voice in the back of your head that tells you to do bad things.  Meanwhile, an ambulance roams around the unnamed town as all hell breaks loose.  It’s a hallucinatory hellscape filled with monsters and terrors and creatures of all stripes and just as soon as it seems that our EMTs have found their call…  they drive right past.  In the cab, they’re taking handfuls of medications that they stole from the hospital, while a group of local children find a dead clown and decide they have to give him a funeral.  The horrors escalate and continue (and I’m going to be honest, I can’t describe all the visuals to you because they’re already making my skin crawl and I want you to be sure you’re ready to choose to see the kind of things this comic wants to show us), checking in on the Diner from issue #1 and just basically being horrifying.  The worst part of all comes as the narrator tries to explain that we’re all one, we’re all equally good, we just have to try harder, as our protagonists realize why they’re out on their run in the first place.

That incredibly mean-spirited, horrifying shaggy dog story may have been a yard too far for me, as it escalates the horrors we’ve seen in the previous two arcs by a factor of ten, and does so with obvious glee.  The whole issue is devoted to page after page of chaos, fire, insects, blood, gore, and existential terror, and I think it pushed a little too far.  The art of Martin Morazzo is really good, reminding me at certain points of Steve Dillon’s work on ‘Preacher’, lovingly and perfectly showing us polar bear attacks, swarms of insects engulfing innocents and games of “Fork-In-The-Hand”.  That scene, which would be the most terrible part of any other comic, is actually another dark joke in Prince’s script, as one man asks the other how he got so good at the game, only to have the first man respond that he doesn’t WANT to be good at it.  It’s gut-wrenching, and it’s only maybe the fourth most terrifying thing in these pages.

BOTTOM LINE: THIS ONE MIGHT HAVE GONE TOO FAR FOR ME

I can’t lie, Faithful Spoilerites: I’ve been a fan of this book since issue #1, but they may have finally pushed past my comfort level, and I’m scared to think about how next issue might double-down on this one.  Ice Cream Man #8 earns its Mature Readers label with disturbing content, disturbing dialogue and utterly bone-chilling art and does so with gusto and no restraint, earning 4 out of 5 stars overall.  I can’t say that I’m recommending it, I can’t even say that I want to come back for the next arc, but it is a comic book that will stick with you.  It’s a truly horrifying horror comic, so tread lightly, my friends.

This one is even more mean-spirited than the ones that came before it and... I'll be honest, it's kind of off-putting.