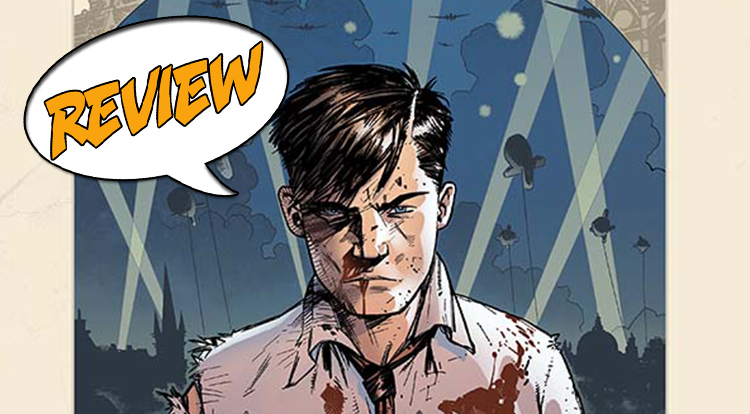 Every hero has their origin story, and in Ian Fleming’s James Bond Origin #1, we see James Bond, orphaned boarding schoolboy, take his first steps on the path to becoming 007! Previously in Ian Fleming’s James Bond Origin: The life of a spy legend must begin somewhere, and it’s at a boarding school during the beginning of World War Two for James.  The Germans are on the march, on land, sea and in the air, and it is during a bombing raid over Scotland that young James Bond undergoes a literal baptism of fire.

There is an understandable urge in fiction to examine the origin story of characters, especially iconic characters like James Bond.  Joining the dots, filling in the blanks, however you dress it up; the urge is real and undeniable.  But is it the right thing to do?

Understandably, there are fans that eat this sort of stuff up, and clamor for more.  After all, getting more of what you love is great, isn’t it?  Only if done right, and sadly, Ian Fleming’s James Bond Origin #1 comes up short in its effort to give us an origin story for the world’s greatest spy.

It’s something of a shock to realize that the character of James Bond was born sometime in the 1920s, and came of age during the most terrible war ever.  The modern cinematic take of the franchise, especially under Daniel Craig, has conditioned us to a technological base that’s almost futuristic, and not the bespoke, almost handcrafted world of the 1940s that writer Jeff Parker creates here.

Ian Fleming’s James Bond Origin #1’s framing device is a German bombing raid that occurred on March 13, 1941, over Scotland.  Amidst the carnage and devastation, Bond and his school chums race to escape the resulting inferno, allowing for flashbacks to his school in the days before the Scottish excursion.

The version of Bond presented here is that of a determined young man, eager to learn more about his dead mother, from a teacher he befriends, Professor Keller, who knew her.  At school, Bond starts up a judo club and stands up to bullies.  He is perfectly willing to chase down two men who attack Keller and steal paperwork from him.  All in all, he comes across as a perfectly decent fellow, with ambitions larger than simple boarding school.

Which is at odds with the Bond presented on screen, and indeed, further at odds with the Bond we see in Fleming’s books.  By our modern standards, the Bond in written form is a misogynistic racist, with a hardwired contempt for most of the people he comes across, especially the women he readily beds, and just as readily discards.  If we even had hints of his amoral character in this first issue, that would’ve been an indicator of what is to come.  The complete absence of these defining character traits make this version of Bond a very bland character.

This is always the risk when you embark on this type of project.  In establishing the foundation of a character, everything that made that character iconic is mostly absent.  Here, Bond is a schoolboy.  None of the apparatus that surrounds him in the books and movies to enable his work is present.  There is no M, no Q, no kitted out cars and certainly no license to kill.  As a result, everything that makes Bond unique and eye-catching is absent; leaving one wondering what exactly is the point?

In terms of the writing, Parker has provided a serviceable script that doesn’t venture too far outside what one would expect from an action-adventure story set in this period.  This is frustrating, as we are talking about a milieu ripe for exploitation – Nazi spies and plots everywhere, Europe on the threshold of total defeat and Britain standing alone.  As for Bond, his character is largely undefined, other than a certain youthful earnestness that provides the impetus to his actions and responses.

FOR YOUR EYES ONLY

The artwork is marginally better than the storyline, but not so much it elevates the book above the humdrum.  Certainly, Bob Qs coloring does improve his line work, and the splash page depicting the inferno in the aftermath of the German bombing raid is somber and affecting, as it should be.  The artwork feels like a throwback to an earlier art style prevalent in British comics in the 60s and 70s, with chiseled features, squared off jaws abounding.  Clever use of panels pushes the action along, and is probably the best feature of Ian Fleming’s James Bond Origin #1.

Young Sherlock Holmes.  Young Indiana Jones.  The pedigree for these sorts of efforts isn’t great.  Unfortunately, Ian Fleming’s James Bond Origin #1 continues the trend with a lackluster story that does little to justify its existence.  There is a definite place for Bond stories set in the period the books were being written.  Anything before that risks what this book lacks – a reason for being.  There is no compelling need for a James Bond Origin series outside Flemings’ own sketched outline and that is borne out by the generic sameness encountered in this introductory issue.

Shaken and not stirred, young James Bond starts his career with an almighty bang.