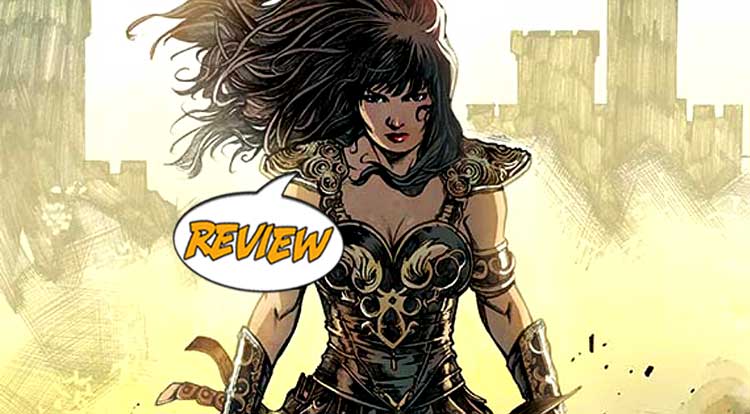 Old crimes come back to haunt the Warrior Princess, necessitating a fight… to the DEATH! Your Major Spoilers review of Xena #5 awaits! Previously in Xena: “In a time of ancient Gods, Warlords, and Kings,
A land in turmoil cried out for a hero.
She was Xena, a mighty princess forged in the heat of battle.
The power.
The passion.
The danger.
Her courage will change the world.”

We open on the deck of a pirate ship in Athens harbor, with Gabriell being held at swordpoint by a very angry woman who demands that Xena fight her. She introduces herself as Callisto, and reminds the Warrior Princess that, back when Xena was a warlord, she burned her home city and killed her sister and mother. Xena tries to talk her out of her quest for vengeance but eventually has to fight to save Gabrielle’s life. While that’s going on, though, Gabby manages to get free and sneak down to the hold to free Callisto’s other prisoners, a crowd of women who have been shanghaied, but ends up trapped below decks as the ship burns, while Xena fights against an equally skilled warrior who refuses to let them go.

While there’s no attempt to make the characters look like Lucy Lawless, Renee O’Connor or Hudson Leick, the character designs for this issue are remarkable. Cifuentes’ gives each character a distinct face, with a wide range of expressions (especially Callisto, whose rage and madness are palpable) and the combat sequences are fast, furious and well-done. This issue’s story is a bit puzzling to me, in that it works well (Xena is driven by Gabrielle’s example and Hercules’ wisdom to try and convince Callisto to give up vengeance, taking Gabby as her traveling partner at the end) but tells tales that were already shown in the television show twenty-odd years ago. That’s less a problem than it is a curiosity, though, but I wonder how many people will buy this comic without already knowing the stories as they were told on television.

Leaving aside the age-old question of who the target audience is, this is a solid bit of comic storytelling, giving us a repentant former villain Xena faced with the consequences of her own previous villainy, a vengeance-maddened Callisto and a clever, resourceful Gabrielle who really turns the tide. Xena #5 even has a unique quasi-ancient font used for the lettering to enhance the book’s “time of ancient gods, warriors and kings” vibe, with some excellent art, earning a well-deserved 4 out of 5 stars overall knowing how the story went the first time, this one makes for a good read.

Telling a story that's been told before, but doing it with style and lovely art.