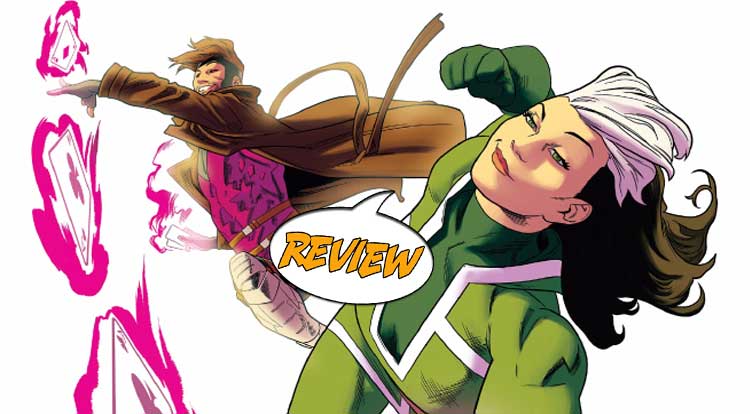 The ’90s are back, y’all, and they’re all up in your comic book face!  Your Major Spoilers review of Rogue & Gambit #1 awaits! Previously in Rogue & Gambit: “Everybody’s favorite X-couple is reunited!  And boy, are they not happy about that…  Kitty Pryde must send Rogue and Gambit on an undercover mission to find a group of kidnapped mutants.  What they discover on this mission will shock them.  But will it also bring them closer together?  It’s a high-stakes adventure caper that only the two hottest X-Men can deliver!”

HE’S BACK IN FULL DIRTBAG MODE

It’s always wonderful to jump into an X-Men comic and have it hearken back to the old-school Claremont days that I remember from my youth, but it’s a difficult, almost off-putting experience at the same time.  It is, after all, not 1987 anymore.  That said, this book takes the right tack with the material, immediately opening with Gambit being a jerk about his stalled/faltering relationship with Rogue, to the point where he interrupts a Danger Room session to get close to her.  When Kitty comes to Rogue with a special mission that only she and Gambit can pull off, Rogue refuses to play along, even arguing that he won’t be interested, but in the end, they end up on a jet to an island retreat for special mutant couples counseling.  Given the mysterious opening sequence (wherein a trio of mutants is seemingly killed and told that they’ve “completed the program”), it’s clear that more is up here than just another cure-for-mutant-powers storyline, but the last page reveal serves as both a great cliffhanger and a rare skillful use of the Gilligan Cut in modern media.

This is a lovely comic book, certainly much better than the cover (which is far too sparse, uses the space strangely and has both our heroes in awkward poses) would imply.  The use of nostalgia is one of the biggest drawbacks of Marvel Legacy, but playing with the history of this messed-up relationship takes that drawback and makes it part of the story, even using it for establishing character moments (as when Gambit teases Storm with his nickname for her) and the convolutions necessary to make this work aren’t as much of a stretch as the solicit might make it seem.  If you’re only here for the Kenicki/Rizzo stylings of our southern duo, you’ll be satisfied, but the story makes it work even if you’re not, and throws in a dig at the Colossus/Shadowcat pairing as well.

THE BOTTOM LINE: NOSTALGIA, BUT WITH THE POTENTIAL FOR SOMETHING NEW

In short, it’s hard to do X-Men well, given the army of characters and myriad eras of publication, but this book balances the late eighties with a modern take in a way that works, leaving Rogue & Gambit #1 with a better than average 3.5 out of 5 stars overall.  I miss the days when a story like this would be a subplot in the main comic, but getting character-driven quasi-romance books in the day of epic massive multiplayer crossover nonsense is hard enough without letting the perfect be the enemy of the good…

Well-drawn, making great use of X-Men history and the distinct personalities and history of our protagonists, with a really killer last page...