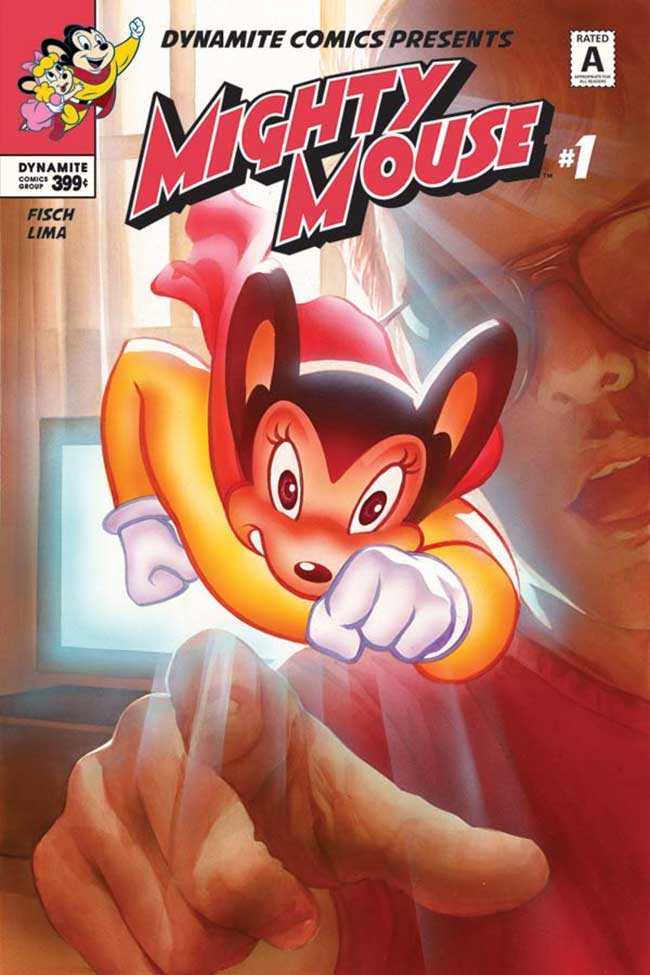 Dynamite Entertainment has announced Mighty Mouse is returning to comics this June with cover art by Alex Ross and Neal Adams.

Imagine that the world’s greatest hero has been exiled to another dimension — an alien world, where not even the laws of physics work the way they should. The only person who even believes the hero exists is a young kid whom no one will listen to. And yet, the hero — who just happens to be a cartoon mouse — remains the shining light that this drab, cynical world needs to restore its color and life. Here comes Mighty Mouse to save the day in his most unexpected adventure yet… right here, in the real world!

“One of my favorite things about writing comics is getting the chance to play with characters I’ve loved all my life,” says writer Solly Fisch. “And what’s not to love about Mighty Mouse? Not only is he funny, but of all the super heroes you can name, there aren’t many who dedicate themselves quite so literally to fighting for the (ahem) little guy. When I was a kid, my sister and I used to get up early to watch Mighty Mouse cartoons on TV and, in those prehistoric pre-DVR, pre-streaming days, we’d tide ourselves over between shows by listening to our Mighty Mouse record (yes, on vinyl. I said it was prehistoric.) Decades later, I fell in love with the character all over again, thanks to Ralph Bakshi’s brilliantly insane Mighty Mouse TV series. Now, I get to contribute yet another unique spin on Mighty Mouse, as we bring him rocketing out of Mouseville and into the real world… and couldn’t we all really use someone to come save the day? It’s all pretty cool, and I’m having enormous fun with the series. Hopefully, everyone else will, too! Oh, and did I mention that I can still sing the entire Mighty Mouse theme song by heart? Don’t get me started!”

The Mighty Mouse series is being licensed from CBS Consumer Products and will arrive in June 2017.